My input is 0 but the equality component disagrees. Is this a bug or am I missing something?

Try Smaller instead, using an arbitrary, very small value like 0.0001 on the ‘B’ input. And use Abs (Absolute value) on the ‘A’ input to handle negative values; this can be done using the expression “abs(x)” directly on the ‘A’ input. Like this:

Yep, this will do the trick. Happened to me few days ago and this is exactly how I made my def working. But why does it happen in a first place?

See here: Strange behavior of Smaller Than component I’ve made an equality within tolerance component in my plug-in pufferfish. In the linked post I have also shown how to do it native GH way. This question (and many other) have been asked many times before. Always good to give the forum a quick search before posting. [Equality] Equality.gh (11.3 KB)

Interesting read. I have noticed that the values weren’t exactly rounded.

So when exactly Equality component can be used if every reading has some tolerance applied?

Many thanks for the help, that works perfectly. Michael, it might take a few weeks for me to get to the bottom of that!

It’s not just zero, of course. The same technique applies to any value you want to match. If the difference is smaller than 0.0001, it’s a match!

You can change the decimal display in Grasshopper’s File>Preferences. 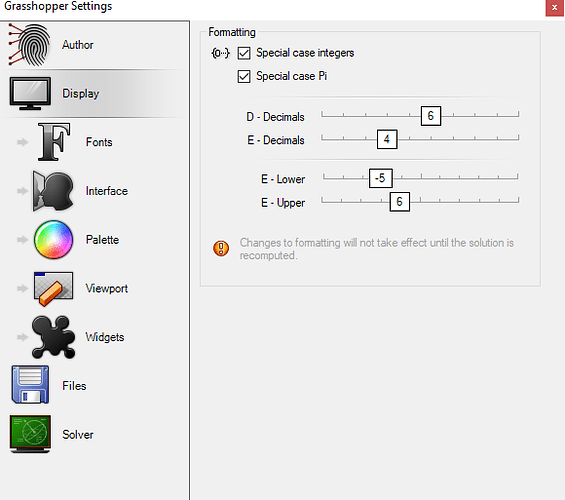 Yeah, I know this settings. yet slider is set to 6 digits max or i miss some settings?

So when exactly Equality component can be used if every reading has some tolerance applied?

When you are comparing integers for example, no accuracy problems there. Or maybe if you first specifically round your floating point values to a small number of decimal places.

Maybe, but if comparing sliders it shouldn’t matter, sliders make the number they say they do. The issue is with values generated in other ways (area, lengths, ect.)

Well I’m not (Have it in Pufferfish

The similarity component is quite misleading and useless as it is : 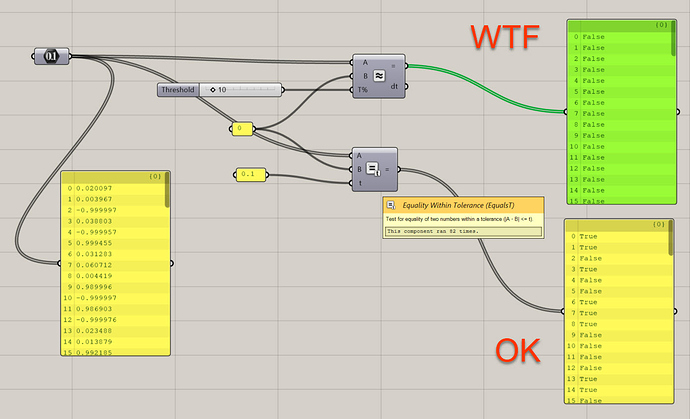 Yeah agreed. It’s totally unclear what the 10% refers to. Must value B be within the \left [ 0.9A, 1.1A\right ] range? Or is the ten percent measured from B? Or whichever value is bigger?

There’s only really two meaningful similarity metrics for floating point values that I can see; absolute difference and discrete distance.

Everyone will be familiar with the former and it’s what almost every software uses, the latter measures the amount of unique values in between the numbers. It means that small numbers have to be more alike than big numbers for them to be considered similar. This metric more closely tracks the actual inaccuracies that occur in floating point operations.

Hi David, thanks for the clarification

I can see why this wouldn’t work for A=0

Or is the ten percent measured from B? Or whichever value is bigger?

I guess that if B=0, then the tool should automatically switch to an “Absolute” difference, which is how I understant Pufferfish does it.

In the other cases, it could work using the following logic :

If A and B don’t have the same sign, the option would switch to “Absolute” difference.

Would that make sense ?