Hi there,
I noticed that the ‘Curve.Offset()’ rhinocommon method behave weird when the CurveOffsetCornerStyle.None is set.
By offseting one single segment open NURBS curve by 60 and 360mm, I get the following results:

Moreover, when I run the ‘EdgeSurface’ command on the two resulting curves, the resulting surface of the CurveOffsetCornerStyle.None option are pretty bad: 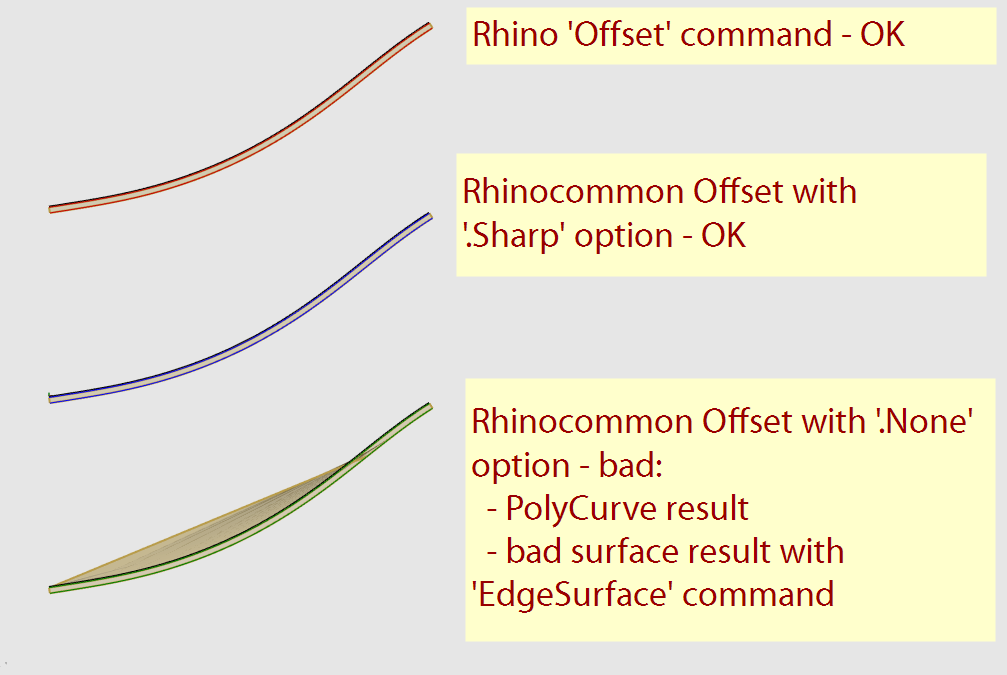 More generally, I find that the rhinocommon Offset method lacks of features that the Rhino command version offers:

An upgrade of the SDK method to match the command possibilities would be welcome.

I’m assuming by specifying CurveOffsetCornerStyle.None, each curve span is offset, which is why a polycurve is returned. But I’d need to dig further. I can see that OffsetMultiple produces the same result as Curve.Offset.

I also see that the Offset command does not give you Corner=None option. I’m not sure why they differ.

To to "both sides, just invert the distance value and offset again.

The cap option is not part of the offset calculation. But it’s is easy to do. Flat is just a line segment connecting the two curve. Round is just a start, direction, end arc. Let me know if you need a sample of this

‘Loose’ offset: it would be handy to have some option to do it in the SDK, rather than to move control points manually.

I made a python script for this, maybe it helps: