I have a handful of dynamic blocks for standard symbols (drawing label, section, etc.) that I use in AutoCAD and I’m wondering if such a thing is available for Rhino. The section symbol can be reversed simply by clicking an arrow, it can be resized lengthwise without exploding, etc. Unfortunately when I import them into Rhino they lose all their functionality.

Thanks in advance if anyone has a source for such items.

I’m trying to do all of my 2D drafting work now in Rhino and this request is actually more important than I originally thought. I did a full set of drawings yesterday, start to scratch with title blocks, tables, etc. in Rhino and the amount of time I spent re-drawing or re-sizing section symbols as the drawings progressed was significant. I never paid much attention to those blocks in AutoCAD - I don’t even remember where I got them - but they are a great time saver. I hope something similar might be created for Rhino.

@mary, can you comment on this when you get a chance?

I’m going to chime in here, being someone who spends all day in Layout mode. The workaround I use for this is to keep all of my symbols, titleblocks, frames etc. in a separate Rhino file that I import whenever I need them on a specific Layout page. Of course, I have to manually drag it on to the drawing and adjust their size etc, but it works.

Is this what you meant Arail?

This is a quick shot of what I’m talking about. Selecting the symbol and then clicking on the controls allows you to reverse it, lengthen or shorten it, rotate it, etc. When I bring this into Rhino it becomes a static block with no functionality. Yesterday I counted and figured out that I used 20 different versions of this, each of which was re-positioned or re-sized frequently so even though it might seem to be a gimmick, it’s actually a pretty serious time saver for the kind of work I do. 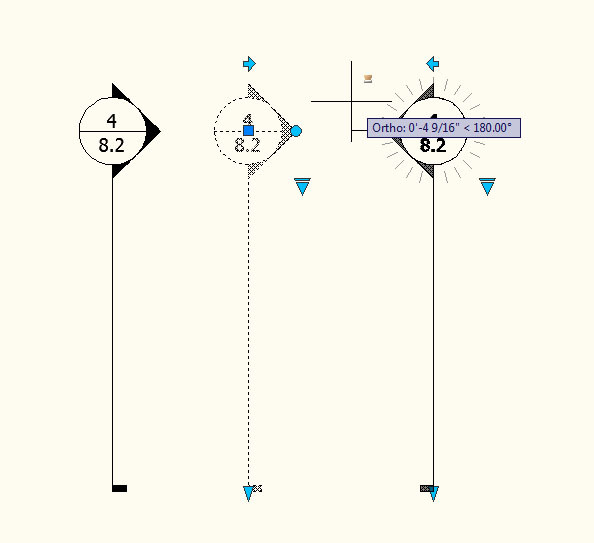 Absolutely agree. This and proper fractions would catapult Rhino in to the architecture stratosphere
(where it deserves to be because it does many, many things that the architecture programs don’t).

You know about revision clouds, right? The command revcloud… many people don’t know its there.

Hi Cosmas- what do you mean here exactly, as far as Rhino dims ?

There’s a name for it, but basically the numbers of the fraction are smaller than the appointed text height and the numerator is displayed above the denominator instead of next to each other with a slash between them. These read more clearly than, say, 3’- 1 1/8". I believe that Andre Chantreuil was big on this a few years ago, but I haven’t heard much fuss about this lately. 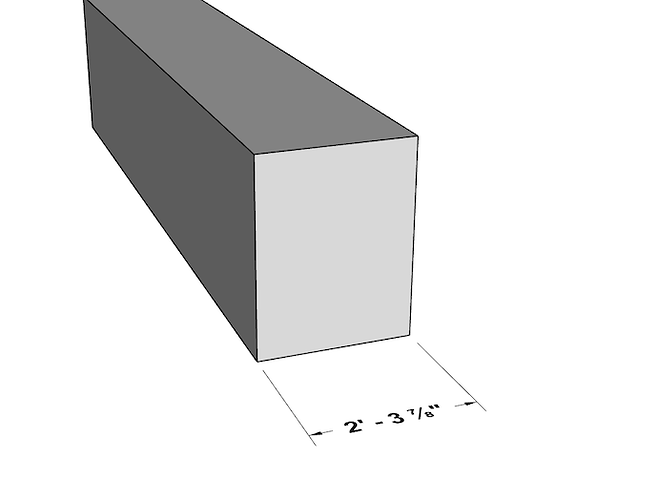 on mac, you can set up text replacements so anytime you type 5/8, it shows up as (hmm- it won’t work in this particular reply field… but it’s the unicode vulgar fraction)…

they’re sort of limited regarding typical architectural dimensions so if it were to be implemented in rhino, i’d imagine it would require a custom font to be made… at least going all the way through 16ths… but if the effort were to be made to do such a thing, it should probably go through 128ths…

as of now (again, on mac at least) this is what fractions replacements are limited to…

I remember those from Revit. If my memory serves me right, those handles were limited to 2D objects. You would just drop a “mirror” widget to define the mirroring axis or you would define position relations and lock some, while others would stay variable and scale with the global object scale.

@Pascal, @Mary, I think this could be a good extension of the Gumball:

I remember those from Revit. If my memory serves me right, those handles were limited to 2D objects.

Correct. This request is about 2D work. I’m not expecting 3D versions of dynamic section symbols, drawing labels, etc. (would be cool though).

That’s the key right there. The dynamic block allows you to scale the item by length without scaling the circle, triangle, end point or text. And the controls allow you to reverse direction, rotate or mirror and still maintain the correct orientation of text.

For those of you not familiar with this kind of 2D drawing the attached JPG should clarify. Section symbols (and other, similar symbols) tell the viewer on what page the section is found and where the line of the section is taken. The sections on this page were probably resized and repositioned a dozen times before final print. Rebuilding them each time would be tedious. Clicking on the end tab and dragging it out or in saves significant time.

And, as a side note, Rhino is known as a 3D modeler and it’s why I originally purchased a license but it’s also fantastic for 2D drafting. 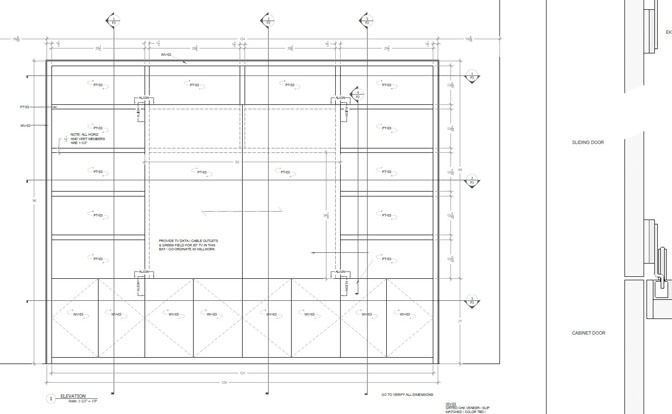 or- instead of just making dynamic symbols which, while useful, is very limited in use where as if dimensioning/annotating as a whole adopted the functionality, it would be much more widely used and probably more worth the effort required to make it happen.

[quote=“arail, post:13, topic:7788”]
This request is about 2D work. I’m not expecting 3D versions of dynamic section symbols, drawing labels, etc. (would be cool though).[/quote] [quote=“arail, post:13, topic:7788”]
And, as a side note, Rhino is known as a 3D modeler and it’s why I originally purchased a license but it’s also fantastic for 2D drafting.[/quote]
Yeah, well, that’s the point. I use Rhino all the time for vector drawing but Rhino is 3D and so is every line you draw. The differentiation of 2D and 3D line types of AutoCAD is like a piece left over from the age of dinosaurs.

I don’t know about text orientation since I don’t use rhino layouts at all, but rotation, scale and mirror (reverse direction) is what can easily be done with the Gumball. You “just” need to make some of the sub objects indifferent to overall scale and rotation and you could extend the section line just as in AutoCAD.

Another approach to this would be selectable Line/Curve sub objects in blocks or groups. So you could just select the header or footer and drag it to extend the line or mirror it.

That said, I think what @jeff_hammond said is much more to the task. I mean, it’s nice to have some history working on dimensions and annotation to update the positions, but the control over how they update is pretty much unusable for architectural drawing. Section annotations are basically special cases of annotations and dimensions. I don’t know about AutoCAD, but Revit section symbols are actually controls that define a section view. They just happen to be printable in the 2D views.

Anyway, the way you can define your own annotation symbol and dynamically link it to objects is way beyond Rhinos current capabilities. Would be nice to see some improvement there.

Interesting conversation. Your ambitions are much greater and more complex than mine. I wasn’t hoping for symbols with a parametric relation to geometry (and I’m not sure that would be in my interest - Solidworks weighs in at $4000 for the cheapest license and $8000 for Premium, Revit is what? $5000? - I’m wary of wanting features from software that would price it out of my reach). The sectional symbols I’m referring to have no actual relation to the geometry (and even the term section here is meant as a 2D drawing reference, not an actual section in a 3D model) - they’re just one small step up from simple labels. In effect, they’re symbols with their own little gumball embedded in them - click this and it mirrors, pull that and it lengthens, drag this handle and it rotates, etc.

nah… sketchup does all of those things i was saying… and it’s free or 1/2 price of rhino.

i actually think the dynamic symbol would be more work to implement… the dimensions can happen with just the move/drag tools. the symbols i imagine require a more specialized definition/functionality to work…

or- what i was saying was that if a dynamic symbol functionality were to be created, then it would be best if some (not all- not more) of the things required to make it work were applied to dimensions.

Sorry for the confusion Jeff, I was replying to HaLo’s comment about the parametric nature of Revit’s sectional symbols

i think i’m scoring about 4/10 on reading comprehension today.

As I said, the Revit section “symbols” are a great deal more than just dynamic symbols and in fact, Revit does a lot more with all the BIM stuff…

Regarding the price tag, I’d say that went up drastically when it was bought up by Autodesk. Just guessing from what we saw when they bought T-Splines