Hi, I am running into this problem with the addition component where it returns this error: “Addition undefined between points and numbers”.

I am referring to a definition from a tutorial, which works smoothly in it.
In attachment the .gh definition. 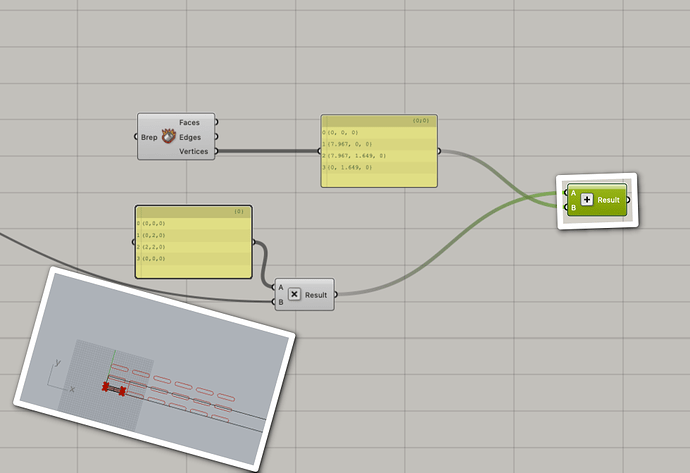 As soon as you run data through a panel, it becomes text. So that’s almost never what you want. I suspect the tutorial connects the B input of the addition component directly to the Vertices output of the Explode Brep component.

You’re right in that it probably should have worked, but the logic which tries to convert text into an addable data type made the wrong decision and created numbers instead of points from the {x, y, z} text.

I suspect the tutorial connects the B input of the addition component directly to the Vertices output of the Explode Brep component.

Yes, that is right. In fact I added the panel in the attempt to understand what was going on. Anyway, with or without that panel, the addition component will still return the same error.

Oops, my mistake. The problem was in the other argument; the A input.

The result of the multiplication component is a number, not a point or vector:

Try converting the text inside the panel explicitly to point data prior to the multiplication component. When you do that you’ll notice the conversion will fail. It’s the wrong sort of brackets.

This works I think:

it worked, thanks.
Still, though, I do not know why in the tutorial the component does not require this step.

Did it use curly brackets in the leftmost panel?

No, I initially used round brackets and then changed them to curly. Which apparently was the real hindrance.