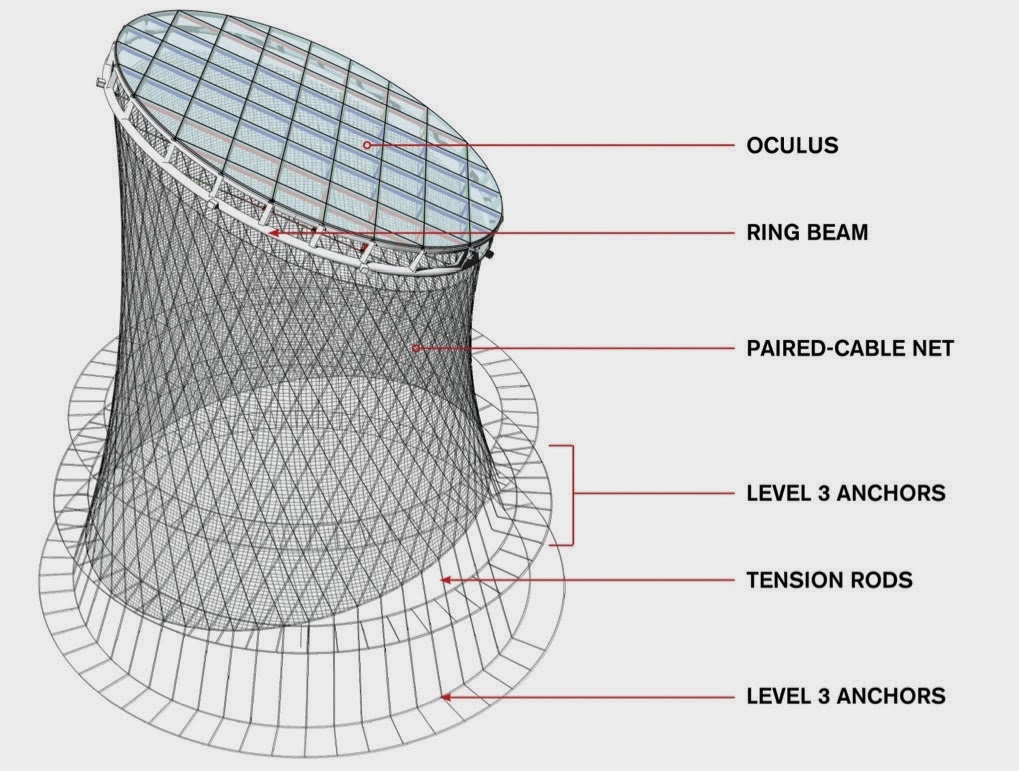 In the heart of New York’s lower Manhattan the Metropolitan Transit Authority (MTA) is now replacing an early 1900s maze of underground pedestrian passages with a light-filled central hub.

The overall work involves several projects: rehabilitation of four existing stations, construction of an underground pedestrian concourse and connections to two other stations, and construction of the main transit center building, the Fulton Transit Center. The Fulton Transit Center’s core is organised around a grand civic space, linking 11 subway lines and 6 stations, including those serving the World Trade Center site.

This above ground atrium structure is an artistic, architectural and engineering collaboration between James Carpenter Design Associates and Grimshaw Architects, with Arup as the engineer and facade consultant.

A hyperbolic paraboloid cable net stretches within the cone of this contemporary oculus. The cable net supports an inner skin of perforated metal reflector panels, which bounce daylight throughout the atrium to the deepest levels of the transit center.

Enclos, the curtainwall company, produced a 3D model of the Transit Center’s interior cable net system. The model was critical in several aspects. To estimate the cable lengths, they started with the structural drawings, which included a table of 1056 nodal coordinates, each with an X, Y and Z component. They automated the generation of the cable net geometry and extracted accurate cable lengths of the tensioned cable net.

The control points were organized within Microsoft Excel. By developing a custom component within Grasshopper, the Excel spreadsheet coordinates were streamed in to the Rhino model. After verifying the accuracy of the work-point population, these points were used to generate the centerlines for the stainless steel cable members and tension rods which make up the cable net. The values could be changed at any point within the design process and all other tasks were immediately updated.

The Rhino model information was streamed via Grasshopper in to a structural analysis tool’s database to check the construction’s integrity under prescribed loads.

Because of the varied metal panel geometries and perforations that clad the cable net, accurate fabrication was a potential challenge. So the model was also used to automatically generate the complicated fabrication drawings for the 952 unique rhomboid and triangular perforated metal panels that wrap the net’s geometry.

Detailed description of process by Enclos . . .