Was this written in April 1st?

There are two issues we need some feedback from Rhino community:

(Before posting this message, we have discussed with McNeel. We appreciate the feedback from Rhino community.)

We just released V2. Sorry for the delay of replying your question.

As we all know there are many pirate copies of Rhino and related plugins. While we don’t mind the loss of profit, there is a BIG problem which could cause problems for our users:

XNurbs’ variational surfacing can simply overwhelm others (The tech produces fair shapes that are analogous to a physical model: when a wooden batten bends, it always assumes a shape that minimizes its bending energy to form a smooth curve.). So with XNurbs, who is going to pay expensive fees for high-end software? Some irresponsible Rhino “users” would cause high-end systems to lose sales. Do you think what kind of response big CAD companies would have - they have a lot of lawyers…

So for the interest of our users and us, we have to do something. Do you agree?

We are a very responsible party - as we promised several months ago, our V1.X users are now getting a free upgrade to V2.X.

So with XNurbs, who is going to pay expensive fees for high-end software? Some irresponsible Rhino “users” would cause high-end systems to lose sales. Do you think what kind of response big CAD companies would have - they have a lot of lawyers…

That’s a completely bogus argument IMO. You can find pirate copies of the most expensive software if you look hard enough… And nobody can possibly win in court by suing you for making a legitimate paid-for plug-in with reasonable security that either gets pirated (yes, it will happen), or gets used in conjunction with other pirated software…

Do you know XNurbs’ capacity? We are getting some messages from others. We update our website and it may better help users to understand the tech …

?? I don’t understand… so XNurbs is better than Class A surfacing tools in high-end software? what am I missing here? I don’t think an “simple” automatic surface can be better than careful manual CV massaging with a bit of match edge/align here and there.

XNurbs’ variational surfacing can simply overwhelm others (The tech produces fair shapes that are analogous to a physical model: when a wooden batten bends, it always assumes a shape that minimizes its bending energy to form a smooth curve.

Alright, provided your input geometry is clean and your surface patches thought out you will never need this.

You’re basically selling this as a “press to win” solution which it really isn’t.

“The tech produces fair shapes that are analogous to a physical model” - what does this even mean?

I too have both VSR/TSplines and while in some cases I have found that Rhino produces the same or better results than VSR, some of the VSR tools are really good in my opinion.

The VSR surface align tool is both better and easier to use than Rhino match surface for example. The controlpoint modeling using VSR tools is also a big inprovement over Rhino move UVN in my opinion. Edge approximation of a trimmed surface, super helpful, no Rhino equivalent. and the analysis tools in VSR are in a class of their own. I would gladly purchase an analysis plug-in with the same functionality for Rhino 6, but alas there isn’t one.

TSplines has been a mixed bag for me. I have done some TSplines modeling for really organic shapes, human heads/hands/feet and that worked out great. Wouldn’t even want to try and do that with regular NURBS. On the other hand it looked really promising for hard surface modeling, but I have never been able to get acceptable results with that.

In my opinion we simply don’t have one tool that can do it all, but the Rhino/TSplines/VSR combination was a pretty powerful and useful one for me, and I welcome any new additions that can make my modeling life easier, hence the reason I’m following the development of options like XirusCAD and XNURBS

“When we release xNURBS, it may not be available to everyone - buying xNURB may need get an approval from us.”

I don’t think I understand this. You will develop a plug-in for Rhino, but not make it available to all users? That hardly seems to make any sense. The follow up question would obviously be what would the approval process be? How will you determine who gets to use XNurbs and who doesn’t.

I for one can for sure provide you with some surfacing scenario’s that I run into all the time that are difficult/time consuming to solve with traditional modeling techniques. It does appear that XNurbs could be a good solution since patching N-Sided holes with good results seem to be a strong point of XNurbs.

Do you know XNurbs’ capacity?

It doesn’t matter. Basing your arguments on “well, maybe someone is going to use it in cracked software and maybe some companies will feel cheated and maybe one of them will sue you in court for no legal reason…” That’s just bs (bad speculation).

The idea that this product is too good, and only certain pre-approved users will have the privilege of buying it sounds like too much of a gimmick to me.

I don’t have time for games.

Here’s an example that is common for me and that I struggle with all the time. Maybe my skillset simply isn’t good enough, but I can’t get this perfect to save my life and it’s time consuming. This is where XNurbs could be a welcome addition to my toolbox.

This would represent a “saddle” transition from a top tube to a seat tube on a carbon bicycle frame. The goal is to have a very smooth rounded organic surface in between. It’s basically a six-sided opening I patched it with a large center surface and two side surfaces on either side.

As you can see from the zebra pictures the two side surfaces don’t have continuity and the zebra stripes are pretty wavy. Both .IGS and .3DM files attached. 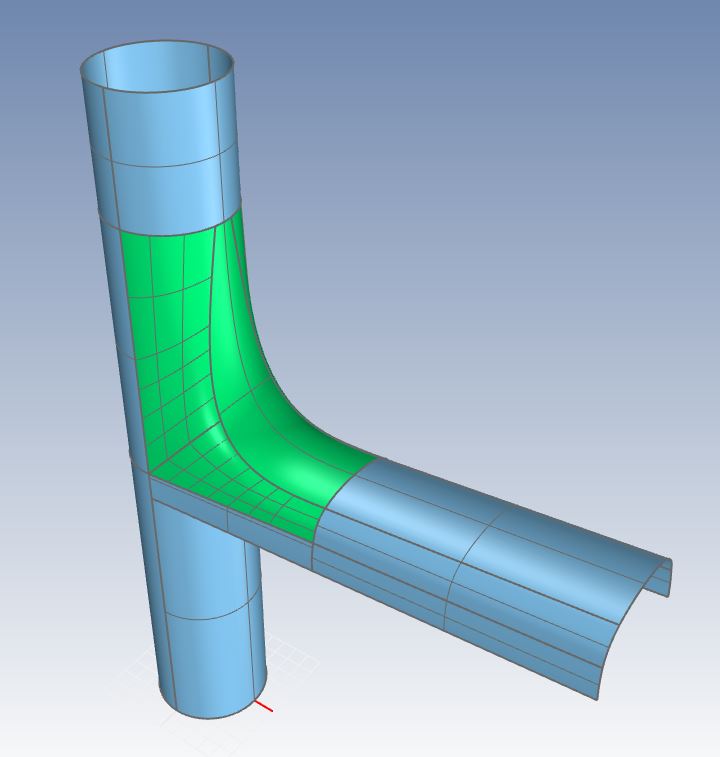 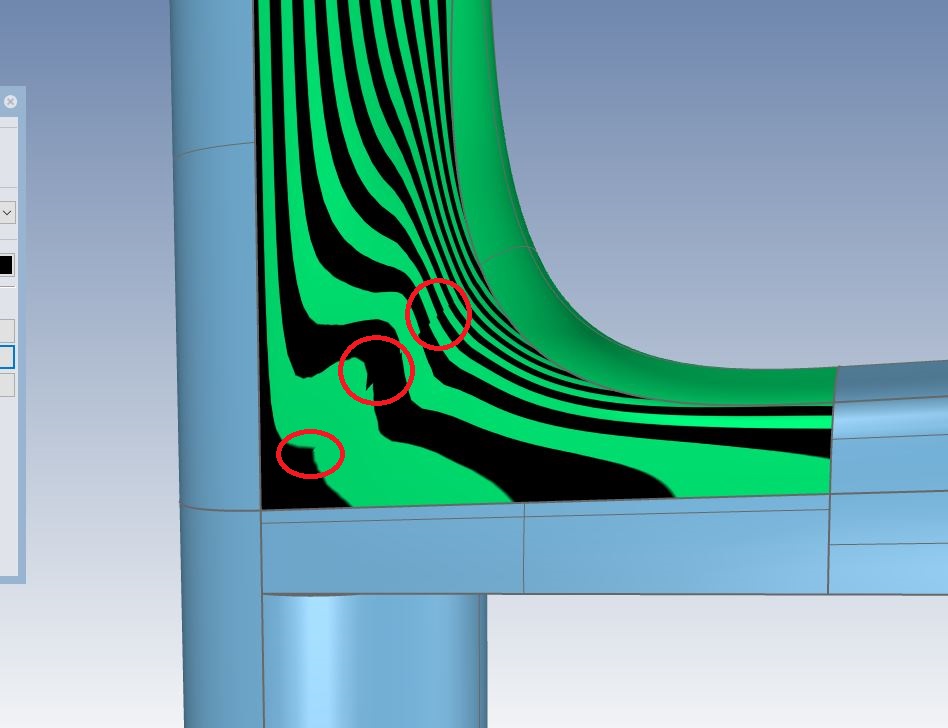 @Pablo_Garcia-Amorena. Question for you, how can you adjust the resolution of the final shape? I don’t believe I have come across that option.

Hi Mark,
Have a look at minute 5:10 of this video (adjusting mesh resolution): https://youtu.be/1ldWfZyQf1U .

Yeti handles it this way.

Hi @Mark_Landsaat,
Indeed, @Daniel_Schmitter referred to the mesh resolution.
The surface resolution is controlled either through Xirus Subdivision or Xirus Rebuild. This works so far for regular quad patches. For irregular patches, as the ones present in this thread, this access will be provided in an update next week.
About the degree, Xirus surfaces and curves are of degree 5. Different degrees, specially 3 and 4, will be provided as soon as possible.

@Stratosfear, thanks for sharing the image. That is another possible solution to the problem. I have tried that approach as well. The top saddle surface is easy to create, it’s the matching surfaces that transition between them that are difficult. If you zoom in on that image you’ll see there’s quite a few surface patches necessary to create the transitions between the top of the TT, bottom of the TT and the ST. Not saying it can’t be done, but it’s really time consuming to do with good continuity. XNurbs or XirusCAD would potentially offer a faster way to resolve areas like this. Cheers.

@Pablo_Garcia-Amorena, thanks for pitching in. I also posted this model on the XirusCAD forum in case you wanted to test the XirusCAD functionality on this model. I’ll explore this myself as well during the weekend.

In my opinion we simply don’t have one tool that can do it all, but the Rhino/TSplines/VSR combination was a pretty powerful and useful one for me, and I welcome any new additions that can make my modeling life easier, hence the reason I’m following the development of options like XirusCAD and XNURBS

I totally agree that with need better tools, and some of those mentioned were powerful, for some people.

I think Xnurbs would be a nice little patch tool. If I ever get pre-approved and admitted in their circle of privilege I’d be very happy and honored to pay a few bills for it. They should give us country club jackets so I can wear it at industry conferences.

XirusCAD sounds like the real deal. I’m really hoping they give us a nice grasshopper set of tools for it.

All this goodness and the SubD stuff coming out McNeel is releasing for Christmas, it’s goibg to be an exciting next year. I can’t wait