Wrestling with a complex surface

For the longest time I have been wrestling with how to create a surface for this area of a ship hull. I have included the outline here and a few cross sections to give an idea of the overall shape. I have data points that define the surface so I can draw more vertical and horizontal lines.

The problems I have are:

I am trying to figure out how the best way to create this shape with those conditions in Rhino.

Hello - is there an overall hull shape? it seems painful and ultimately not very likely to succeed, making individual panels in isolation - is there some reason not to build the entire hull and then cut it up with the edge curves of the panels, if that’s what you need, rather than work backwards like this?

There is an overall hull shape. The problem is that it is too complex to to build in one step. I can make most of the hull in large sections. But this section of the hull splits into twin keels that that end the odd shape shown.

Consider breaking it into these parts…

Then blend/fillet them all together as required.

This is one of the skegs. Even it needs some kind of more breakdown.

The design process suggests a process for 3D modeling.

Actually, the skegs (described as “twin keels” in the plans) were designed integrally as part of the hull shape, including the shaft bossing. The centers of the circular segments of the shaft bossing curves are not even aligned with the centers of the shafts (close but several inches off) until the very end (different left and right). The hull shape was taken from a final tank model.

The mold loft tables include the curves of the shaft bossing.

From the mold loft, the plating design was added. The plating overlaps in some places and scarfs in others. The area around the shaft outlets was then designed as a casting. However, the design for the casting is thicker around the edges to account for the plate thickness but follows the molded lines for about half the bossing circumference.

Ironically, all plastic model kits on the market are designed as you describe, resulting in a horribly misshapen hull. In fact, one 1:200 kit has the skeg as a separate part.

That is the source of my frustration here.

Just listen to David, save yourself a lot of frustration. Stop treating the table of offsets as the Holy Grail too.

Like David Cockey said, take a step back and look at this as it was probably designed. The linesplan may have the stern tube boss offsets, but there’s no way someone considered the offsets of the boss when the hull was being drafted. Same with the skegs and fillets/blends.

I would break it down into hull, skegs, stern tubes because each is far far simple to model individually than together, even the section of interest here. Once they’re modelled, blend them together as required.

How the skegs were constructed is irrelevent to the discussion. Once you have a nice surface you can split, join, add and modify as necessary to achieve your goal.

Despite that, you’ve asked a specific question, and I’m a sucker for punishment, so I gave it a crack. It is incomplete, but hopefully it gives you an idea for how to progress from where you are now. It would however probably be quicker and “better” to start from scratch and model it broken down as suggested above. The skeg trailing edge profile needs to be trimmed, which I have not done, because it is far to complicated to incorporate into a fair surface. 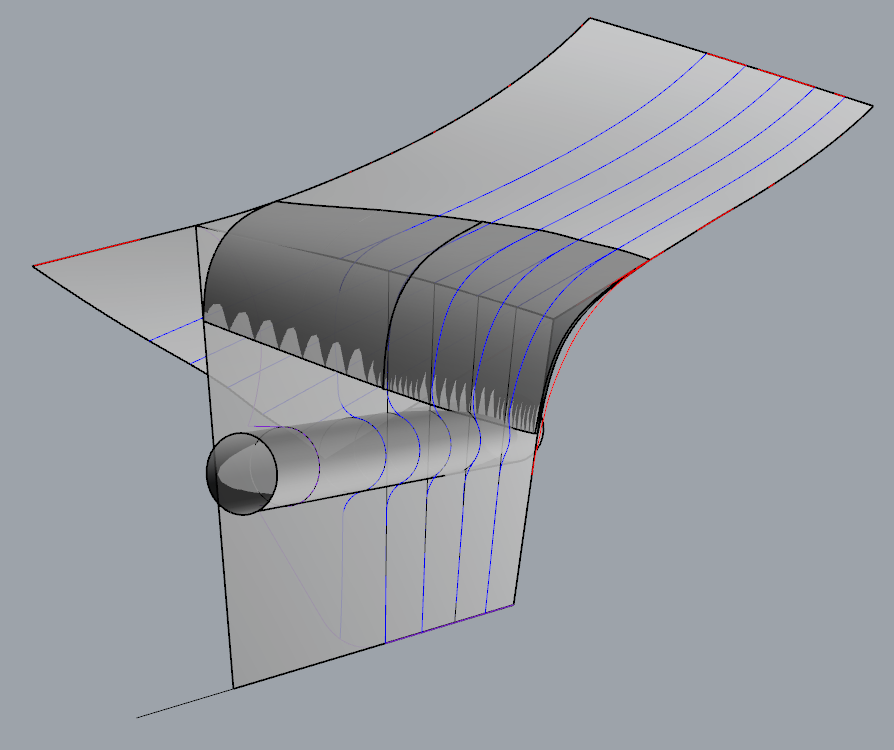 For entertainment, here are some excerpts from the original blueprints that will illustrate how things were done. The first time images are cross sections. The section at the end of the shaft is a casting. The second image shows where the casting fit and the third shows a profile of the casting.

I see what you mean by the skeg at Floor No 179 being integral in that first image. The second (Frame No 192 1/2) is what I expected. Image below is how I would model it, but not sure how to deal with the “fat” skeg" of Floor No 179 though. Perhaps it is more of a “cavity” down CL between the skegs, so model a fair hull between them and trim the cavity to the CL profile. Got a linesplan? 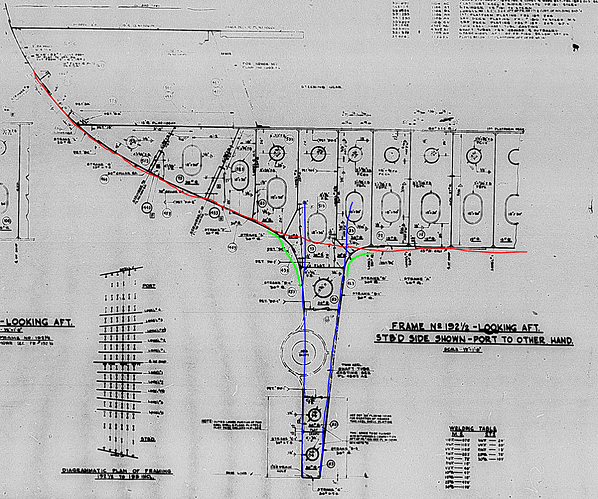