when deleting faces to simplify the geometry, it frequently happens that a single face has left over edges causing the model to kink. i could not find any way to merge them, nor to delete the vertex point without deleting the entire face. 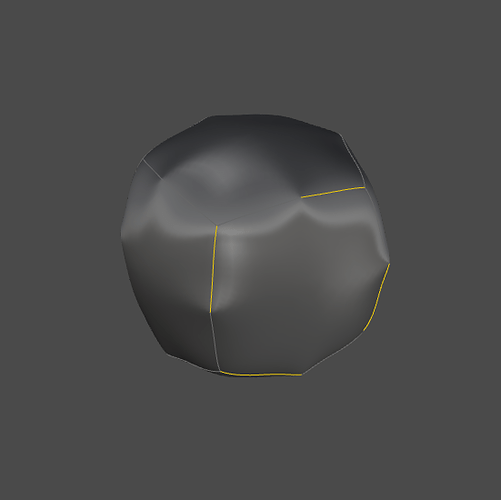 Bridge
when using the option Edge Loop, having the command wait for a further FIRST edge loop does not make sense, it should switch automatically to select the 2nd loop to close the bridge.

when using option Edges, in most cases i assume there are only 2 edges which one wants to close and having the option to use sets with chain as other commands in rhino to switch if desired.

Toggle SubD Display
it cause the entire workfile to toggle. maybe it should just toggle one object? it might cause quite a visual havoc and disorientation when working on a file with a load of SubD objects. it could work for example only for selected objects.

also why finally reserving TAB for this? personally i would have loved to use TAB for years but it was not able to address it without combination, as for instance for toggling open panels and sidebars away. not that i hate it, it is functional, but i am not using SubD exclusively so having such in important key being open to use for something else would be helpful.

Yep. Stitch is the only way out here.

It can become problematic especially if you don’t immediately realise you have been left with geometry like this. I’ve done this plenty of times and sort of bumbled around wondering what was up.

when deleting faces to simplify the geometry

I think that if you use MergeFaces instead, that won’t leave you with the split edge.

I think that if you use MergeFaces instead, that won’t leave you with the split edge.

well, in the flow of work is does not happen often that i stick to a specific set of tools just not to stumble later over such issues. it is good to have alternatives and not to lay out a pitfall where you cant get out without having to discard the model i think.

I totally agree with you.

The flow of work is, as you say:

I understand however that others may understand such tpics in different ways, and maybe expect that deleting the edge would do something different.

The flow of work is, as you say:

actually not what i said nor meant. just to be sure we do not misunderstand each other, i would believe that whatever tool you use you should end up being able to keep working further on it.

having such in important key being open to use for something else would be helpful.

I think this can be altered now actually.

No misunderstanding, no. I still think in the merge edge case, that stitch is the only way out. So you take that midpoint, and stitch it to an outer edge.

I think this can be altered now actually.

one can change to a different shortcut additionally as it seems, but TAB as a function for the SubD Display toggle unfortunately stays and can also not be used for anything else.

So you take that midpoint, and stitch it to an outer edge.

i am too dumb i guess…i tried and did not accomplish a stitch which would solve the split edge problem. can you show me how that would work here?

Hi, see the below. It’s easier in flat mode, not so easy in smooth. 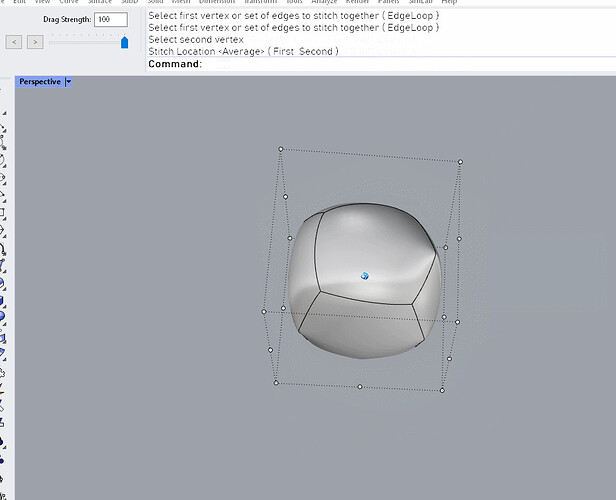 For some reason, my gifs seem to be uploading as jpgs. Go into flat mode, f10 for points on, and then stitch one vertex to another.

ok that works. i had to deactivate the subd display because it does not show me the vertex points and the control points are not selectable hence never succeding at first. fiddling arround angrily

i accidentally hit one then, smelling the rat that it could work i finally succeeded, so thanks!

not super intuitive in this case at least and probably generally though, since i had to work from the middle to the corner otherwise i had to place the point manually. i guess a merge edge could be more intuitive.

Yeah the control points are a bit useless at times. I guess it’s considered a way to see the box mode ‘on top’.

I think there should be an option for a display mode override - because it can be good to know, for example, what moving something in box mode is doing to it in smooth mode. It might just be me though.

I think there should be an option for a display mode override - because it can be good to know, for example, what moving something in box mode is doing to it in smooth mode. It might just be me though.

would be interesting, having both display at the same time could be handy either, one ghosted for instance

True. I haven’t checked, but maybe there’s a way to set the control point wires to be solid. So if you pressed F10 on a subd, you’d see the box mode with thick wires over the top, I know you can set that for surfaces in a display mode. One for @theoutside

we went back and forth about this as subd developed… we opted to simplify the interface and go with box/smooth and not a hybrid mode. As always, we design this for you all, so if there is enough of you that feel strongly about having a hybrid mode we’ll look at what it takes to do so.

My personal opinion, is to NOT have a hybrid mode, but I’m old and stuck in my ways. I’ve done subds for a long time and can “read” the box mode to know what it will smooth to and prefer to have less stuff on screen if possible.

I am however always open to having my mind changed.

so if there is enough of you that feel strongly about having a hybrid mode we’ll look at what it takes to do so.

I’ll vote for some form of Hybrid mode, to me it is difficult to understand where is what in box mode.

Box/smooth is fine. I don’t think the request is for a hybrid mode per se. But one or the other, independent to viewports, on a display mode basis. My arguments for this would be as follows:

There have been other times I’ve thought ‘gee that’d be handy’, but i can’t recall the exact thought stream. So I tried my best off the cuff.

It’d be similar to the background dropdown - Use application settings would be whatever Rhino thinks you’re in, via tab, in other words ‘this display mode uses the box/smooth’ option Rhino is aware is in use, and then the other two settings would be ‘Box Override’ and ‘Smooth Override’. So then you’d have a per viewport per display mode setting.

Although, gotta say, it’s not the feature I’d want most