Wish: "Strut divisions" in SubD to have a "Minimum distance" option

I often end up manually deleting lots of SubD edge loops, because the “Strut divisions” option of the “Multipipe” tool does not allow setting a minimum distance between the strut divisions. Instead, it only offers to set a general number of strut divisions that creates the same same number of edge loops along any of the original curves used to build the multipipe. The problem comes from the fact that some of the curves are way longer than others, so the shorter curves get really dense and require extra time to remove the majority of the strut divisions, while the longest ones require adding some extra edge loops.

Example for how the alternative “Minimum distance” option should work like in a L-shaped design:
Curve A is 100 mm long, while curve B is 30 mm long. The user then runs “Multipipe” and sets a minimum distance of 10 mm, so curve A gets 8 or 9 strut divisions, while curve B gets 2 strut divisions. That makes the resulting shape natural looking due to the evenly distributed edge loops. 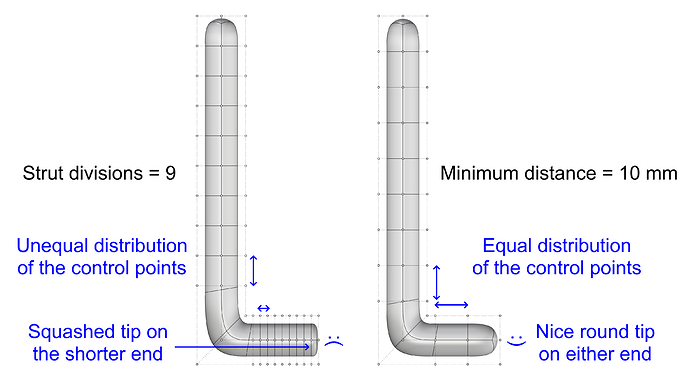 Yes, I see what you mean, and will get this fixed in the Rhino command.

Great, can’t wait to see this option implemented!
Also, a clickable preview in the Command line (similar to the Fillet edge preview) would be helpful, in order to let the user change the diameter, number of strut divisions, end cap, minimum distance or other parameters.

Apart from the initial wish,
RH-61514 MultiPipe: UI tune up

Also, why don’t replace “Strut divisions” with a commonly used term in many programs such as “Segments”? Or why not “Loops”, since it’s exactly the very term already used in several other tools of SubD?

Another proposal. Add an option called “ForceExtraLoop = Yes/No” so that very short curves could be divided by an extra edge loop even if the target Minimum distance is set to a quite large number. Use the above image as an example, if a “MinimumDistance = 32” is used, then the vertical curve which is 100 mm tall will receive 2 edge loops upon completing the “SubD Multipipe” command, while the horizontal curve which is 30 mm long will not receive any extra edge loop. However, with the “ForceExtraLoop = Yes” option activated the short curve will receive an extra edge loop, overriding the minimum distance. the longer curve will not receive an extra edge loop, because it’s already longer than the set minumum distance.