Wish: Rotate view Option for Rotate around pickpoint as default

I didn’t know this rotate around pickpoint shortcut and after a quick try I think I’d want that as default.

Not sure how this works with a 3Dconnexion Space Navigator?

Cool, happy to know you picked it up Martin!

Come to think of it, I think I would like an option (the same option?) to toggle zoom to work as Alt-Mousewheel does now. (Alt-zoom moves the camera together with it’s target, keeping the distance means never getting too close to the target, thus preventing the no-further-zoom ‘issue’)

@pascal is it possible to have Shift-Ctrl-RMB rotate available with ONLY Grasshopper objects showing? At the moment this does not seem to be working.

Also if it is too much trouble for you guys to make this the default behavior, for me it would be sufficient to have Shift-Ctrl-RMB available as one of the rotation mode/options: 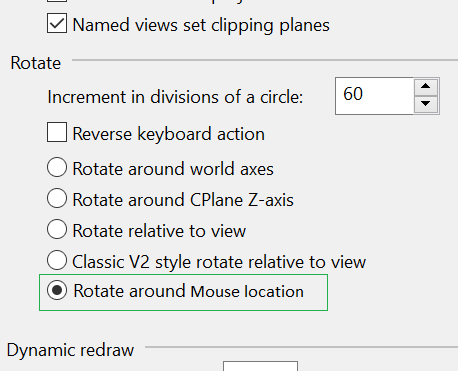 Hello- I would say that is not possible in the current system - it requires objects in the document.

Presumably, yes - I don’t know if it is impossible for the view code to pay attention to ‘non-existent’ objects but it looks like it not set up to do that currently - as far as I know there is not any change in how GH2 will represent geometry - it still is been added to the document until it is baked.

Thats unfortunate, maybe @DavidRutten has an idea to solve this?

if you have Grasshopper objects in the document and do a zoom extents it will set the Rhino view and Camera Target.

The parakeet plugin has a zoom to component as well.

Thank you, I’ll give that a try!

I tried both ways today, but could not get zoom extents to work. (I assume you mean the rhino command?!)

The paraket plugin on the other hand works perfectly.
However at our OEM plugins like that are not allowed, so I would need to find a solution to use Rhino’s “Camera Target” command inside Grasshopper. (which seems to be what the parakeet plugin does)

Can anybody recommend a starting point for me to code a little plugin using a Rhino command? Python, VB, C# etc. Maybe stringing together “Union Box”, “Cubic Center Point” and “Camera Target”.

I would ike to try it myself, I just dont know where to start.

Here’s some recent Zoom Selected code that can get you going.

Hi everyone, I am struggling to create a python script within GH to make snapshots automatically from Rhino baked geometries to .png files. I found this amazing script made by @AndersDeleuran which solves this problem. However, in the case I have, geometries are placed in different Rhino views and my lack of scripting knowledge makes me impossible to edit the code. The input I have is a bunch of curves placed in a row within an individual rectangle which represents the area to print in a pn…

Thank you very much, this is perfect!

For things like that, which would you recommend? Python,VB, C# or something else?

Python is a going to give a non-programming user a easier path. Once a workflow is established C# may be needed if speed is lagging in the python scripts, C# also removes the iron python quirkiness.

Python seems somehow a bit random to me…hmm…but also there are probably more tutorials on Python out there than any of the above.

Thanks for your reply!

Working good!
It should be default.

I can’t imagine an argument against it, but would like to hear…

I gave this some more thought:

Wish for toggle option between default and new behaviour:

And the Camera Target should be sat to the pick point when orbiting.
That way it will be easy to set the focus point for rendering if depth blur is activated.
But we need an TARGET option for the camera focus point though, as now we can only choose None, or Manual. (IMO that should be implemented regardless @nathanletwory)
And I don’t think Zoom should affect camera target as holding down ALT handles this.

(Shift-Alt will work the same, to roll the camera, and same with dolly (Shift-Ctlr-Alt))

It would really make our day when both working on large projects and presenting them.

And the Camera Target should be sat to the pick point when orbiting.
That way it will be easy to set the focus point for rendering if depth blur is activated.
But we need an TARGET option for the camera focus point though, as now we can only choose None, or Manual. (IMO that should be implemented regardless @nathanletwory)

I think you meant to @-mention @andy

I think you meant to @-mention @mikko