This is a small thing but I find myself constantly wishing for this to work: I would like to see an instant update in the viewport when changing the layer color in the color picker… Currently I have to OK the color to see how it looks in the viewport, Many times I need to go back-and-forth several times before finding the needed shade of gray etc.

It works nicely now with layer material color changes while working in the color picker, so hope the same could be hooked up for layer color.

Do you think this is reasonably easy to hook-up? Just ran into it again few times today.

under some ideas and requests. Seems like an easy thing to overlook. Would be nice if the forum had some sort of system for voting on ‘wishes’, along the lines of what’s being tried now with ‘solved’ checkbox (which I still can’t get to work over here).

it seems the mac users are a bit spoiled there already

good to know that Serengeti is not that far away

oh and @Jarek how did you manage to categorize this with 2 different sections simultaneously?
or is it just Papercuts addition?

it seems i am blind i could not do that, tried a few times.

It is in your categories pull-down section once you start a new topic, see one highlighted Yellow …

it as well… I’ll add it to the heap - thanks.
https://mcneel.myjetbrains.com/youtrack/issue/RH-36274
-Pascal

ah ic, its only possible in fixed combinations in that case. well yes but twice i already had the need to categorize mac and windows together, asked @dale and also @pascal about that, never got an answer

i already had the need to categorize mac and windows together,

Maybe there should be a modelling category that would work for both platforms and keep the platform specific questions separate?

Would be nice if the forum had some sort of system for voting on ‘wishes’,

Should there be a Wish list category, or is it something we keep doing with it in the title? Just for use of a voting system.

Since this wish is Windows specific?

I already have a colour picker that I can see change on the fly, well with Rhino for Mac anyway, since the color picker is a system tool and not a program specific tool like Windows.

Good to know it works on Mac already, I use Windows version so hope it is a small tweaks since more complex material changes work in real-time already.

As for tags/categories: I usually try to add “Wish:” to the topic name, but agree, having a category like that makes sense, perhaps as a subcategory. I also like the idea of “modeling” category that would not differentiate between windows and Mac. I have Mac muted for example so I don’t see many of these posts that possibly are non-platform specific.
We went fairly OT over here,but I don’t mind

Pretty common. Not sure who would be the best person from RMA to discuss the forum categories with.

Here are a few options i have with my colour picker. I was trying to add a custom RGB colour to WinRhino colour picker and I wasn’t sure how to do it? Ideas anyone?

My Favourite is Skala … 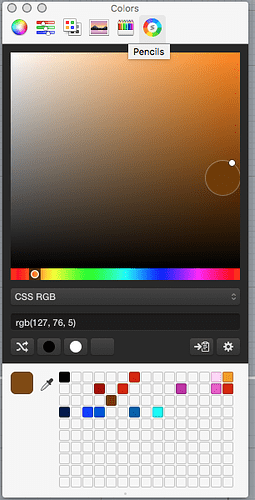 Crayons is basic, and I can keep my custom colours at the bottom … 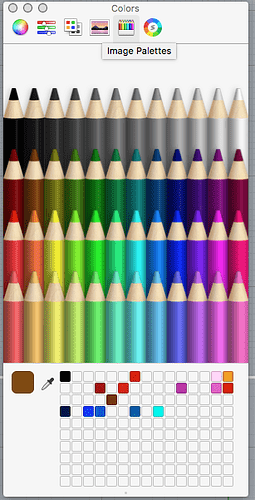 I work on both, though my 27" iMac screen is better that my Gateway system monitor.

Maybe Pascal will be back and put a bug in people’s ear for the categories.

Cheers and have a great day!

There is a system for voting on YT where the developer will go and look for wishes to implement. Note that the system being there doesn’t mean it is used. Perhaps if more people were to go and vote… (as always…)
As it works now, if a topic comes up several times (as in time and time again) in different threads the support people will be able to communicate with the developer that there is a lot of fuzz around a specific feature and that will be a contributing factor in deciding priorities.

EDIT: If a functioning voting system were to be put in place one should probably only be allowed 5 or 10 votes per user… Prioritizing is about choices, not about liking things.

Not sure who would be the best person from RMA to discuss the forum categories with.

That type of issues should be posted on the Meta category

and I would hail @stevebaer or perhaps @brian for something like that.

There is a system for voting on YT where the developer will go and look for wishes to implement.

I think as long as we keep our eyes open on this forum, in classrooms, and at other events with customers it is relatively easy to figure out what the users really need. Voting systems don’t really tell me a whole lot more than someone poked a button. Unless we are talking hundreds or thousands of votes it is pretty hard to make decisions that one feature voted on by 5 people is more important than one voted on by 3

Maybe there should be a modelling category that would work for both platforms and keep the platform specific questions separate?

yes but the two versions are still a bit apart which was maybe the reason not to make it generalized i assume, otherwise it would certainly have offered itself to do so centuries ago one could think. at least very usual modeling questions could be done like that for a while already.

but also for general wishes for future versions, which could concern both platforms like new or modified tools as discussed recently.

the two versions are still a bit apart

In some functionality I agree. But Rhino for mac now has Grasshopper & Layouts, which are the 2 biggest requests. Not everything is there, but enough to get work done.

Modelling techniques are, in my opinion, outside of which tools are in Rhino for mac vs. Rhino for windows. If I want to model a chair, for example, and I want to learn about doing a Y join, then it doesn’t matter if I am on Mac or Windows, it is a technique I am learning. I will use the tools that are there to get the job done. If it takes a bit longer or I have to use limited tools, ces la vie ! N’est-ce pas ?

could concern both platforms

Since 2014, this is less relevant as the code base is the same cross-platform, read all of the post by @dan to get a view of where Rhino, Win & Mac are heading. A small quote below.

How will Rhino Mac evolve alongside Rhino 6 Win?

So, late in 2014 - simply because the timing was “right” - we merged the Rhino 5 for Mac codebase back into the Rhino 6 (for Windows) codebase…effectively unifying them for Rhino 6 (for both Mac and Windows). OH, and we did one other really important thing: we created a process by which, whenever a McNeel developer checks in a change to Rhino, it has to build on BOTH platforms: Windows and Mac.

I believe doing this with the term “Wish List or Wish:” in the subject title, like this post, is the best way to get it to developers.

I think as long as we keep our eyes open on this forum, in classrooms, and at other events with customers it is relatively easy to figure out what the users really need. Voting systems don’t really tell me a whole lot more than someone poked a button.

read all of the post by @dan to get a view of where Rhino, Win & Mac are heading

i think we are talking past each other, not sure who does not understand whom
but thats not what i wanted to talk about

I mentioned that post because it explains were the developers are going in regards to cross-platform code. Just for information, not what you or I want.

Enjoy your day or night, cheers!

yes thats clear, i read that quite some time ago when it was posted. but i have noticed that exploding info in all directions is not very helpful at some point, i still have not one issue solved i requested

I’m with you on this one Steve. I myself keep close tabs on what is going on . I am sure you all at Rhino central are doing the same.
If a person has something to offer , I’m guessing they will speak up.
I am thankful for the people who have questions and for those who help.—Mark