Why does the WIP stack with V6 in the Taskbar? I flip all day between V5 and V6, and this feels annoying.

Yeah I agree, I use all three and the confusion of the taskbar icons between v6 and v7 wip is really annoying.
I believe some months ago this seemed to have worked.
I could be wrong though.

Yeah, this is really confusing. I just spent 5 minutes in V6 thinking it was the WIP. 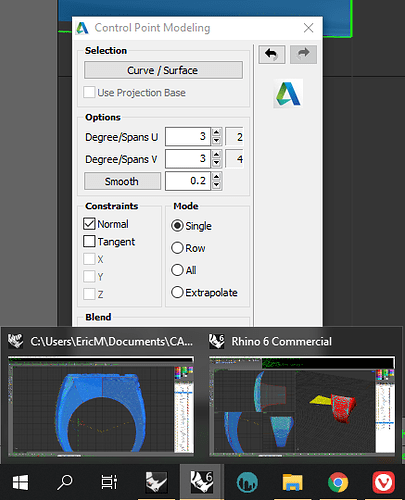 I tried to just use V5 and the WIP, but you can’t copy-paste between them. I have to keep V6 open for a go-between.

So far the WIP settings are separate and not colliding with V6, except for the templates directory.

For now, I’m just going to change my V6 background to something ugly.

Thanks @wim. Can copy/paste to V5 be a thing as well? I wouldn’t need V6 open at all if I could copy paste directly.

I’m half-way expecting that this won’t be possible but it doesn’t hurt to ask…
https://mcneel.myjetbrains.com/youtrack/issue/RH-56380
-wim

Hi Eric - that issue has been closed as Won't fix. You can read the details there. The bottom line is that, under the hood, when you copy an object to the clipboard, Rhino not only copies that object in its current format but also automatically converts it to the previous format. In addition to that, the viewport is also placed on the clipboard. Technically, it would be possible to also convert to older formats but in certain conditions that would lead to performance problems.

I read Dale’s comments and that makes sense.

The transition from V5 -> V6 was very different from the V3 -> V4 or V4 -> V5. Some big plugins were lost to Autodesk, while others offered a $6k ‘loyalty’ fee to upgrade to V6. That’s left a lot of us stuck with a copy/paste to V5 workflow.

I will give the export V5 format a shot.