I have a tip for you if I may… Would be posible to write some “NOTICE: Please be advice do not instal W10 creators update otherwise it will …” in the main Rhino’s startup window with notifications which appears after turning the Rhino up? Would be really nice to have a chance to avoid these problems next time, because it takes me whole day to get here and find a right solution…

I couldn’t agree more. I totally missed the warning in the forum.

I have installed 14393 to 15063 on my hp laptop, but after installation it denied to accept last purchased windows 10 pro license from Microsoft, So I contacted them and they provide me bellow link to resolve it.

Managing the Windows 10 Creators Update rollout for a seamless experience -...

The Creators Update will begin to roll out on April 11th. Like with the Anniversary Update we delivered last August, this update for Windows will proceed in phases. Based on our experience and feedback from our customers, we believe a phased approach...


I followed it but same issue, I cannot buy license again for my OS. At this condition, one of your user recommend me to buy it from ODosta Store
Which is an Indian site with best customer support. Now I bought win 10 25 digit key code at just $48 and happy with successful activation. Cheers
bjornsyse May 8, 2017, 3:28pm #44

Any news on this John? this is starting to become a real problem for us here.

We just released a release candidate of Rhino 5 SR14 available today. (Follow that link, the regular download page is still pointing to SR13). Please download SR14 RC1 and see how it works for you.

This fixed the no layers issue for me. Thanks!

Update: one small bug I found with the SR14 update is the OSnap pop-ups are still very tiny and have this black graphic next to them.

We are working on a general fix for the sizing problem. We thought we had it fixed today but found bugs when we tested it. We hope to have another in-house build to test tomorrow. If that works out correctly, then you can expect a second Release Candidate.

We put about 6 developer-months of work into Rhino 6 to properly support high DPI displays. There are going to be glitches and problems with Rhino 5 on high-DPI displays; we’re fixing the critical bugs that make Rhino 5 unusable, and leaving the rest for Rhino 6.

Yes, we’re aware of this ToolTip display problem but may not be able to fix it.
There is a nice alternative.

In Options > Modeling Aids > Cursor ToolTips, Enable the cursor toolTips, Use the Osnap option and tweak the and Y offsets so the ToolTip appears where you want it to.
This alternative ToolTip is configurable so it can display additional information the default ToolTip can not. This one scales properly with the major changes in Windows 10 Creator’s Edition 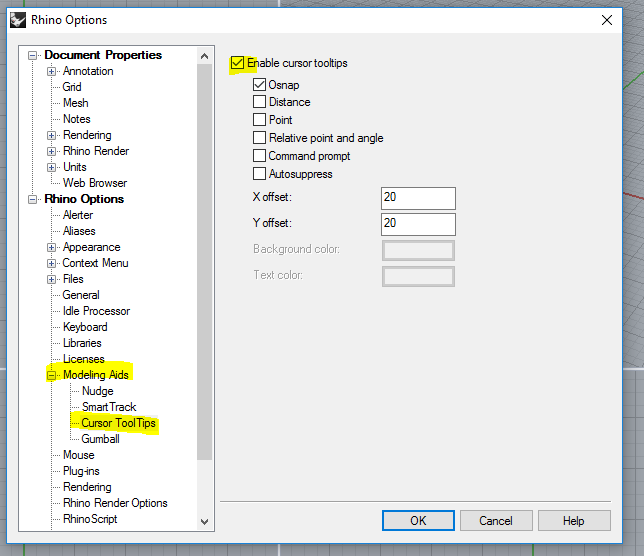 This worked well. Thanks for the tip John!

I downloaded SR4 from the link above. It points me to download a trial version of Rhino.
Is it correct?
I remember in the past downloading just a plain SR, not a full Rhino installation

That’s still the May 5th full installer. It is a full installer that will work for licenses and eval installations. The only difference is the use of a license key.

It will fix the Layer panel issues.
We are finishing up another SR14 release candidate that will address a couple more issues including the cursor tooltip.

Thanks John. I confirm the May 5th full installer fixed the Layer panel issue.
Guido

Another version of Rhino 5 SR14 was just released. This build includes fixes for the cursor tooltips, has full support for all 11 languages, and fixes a bug on High-DPI screens when running Rhino in Asian languages.

Andrew, I can’t tell from your report what is actually going wrong. When you say:

It hangs up Windows Explorer and stalls.

do you mean that it stalls when you try to run the installer?

What happens if you restart Windows in addition to restarting Explorer?

do you mean that it stalls when you try to run the installer?

What happens if you restart Windows in addition to restarting Explorer?

I do not use the Creators version of Windows 10.