What to do with a Pink Pearl eraser, X-Acto knife, Rhino 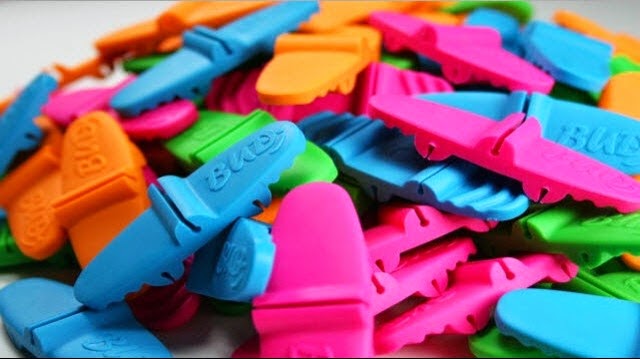 Are you having troubles with those ear buds tangling? Dan Falvey, from Hard Part Inc., decided to solve that problem his own way. Here’s his story:

One Sunday morning I got up early and decided to listen to the BBC and NPR news on my radio. In an effort not to disturb my wife (happywife,happylife), I went searching for a set of ear buds. After finding three or four sets all tangled up, I spent the next 30 minutes and multiple cups of coffee untangling them. – Not acceptable. I had purchased several “ear bud cord management” products in the past but they were bulky and a pain to use.

So I decided that there was a better solution. The first 30 minutes I figured out the design direction: Holding the jack and ear bud together seemed to be the best solution to keep the cords from knotting up. So I tried a spring steel paper clamp: too much point pressure and bulky. I thought about it for a bit … grabbed some new Pink Pearl erasers, an X-Acto knife, and some small diameter brass tubing.

_For the next hour I punched holes through the “pinks” with the brass tubing and cut parallel slits to allow access into the holes. In this first iteration the access slits worked. But when you pinched the pink to open the slits to drop out the buds the jack cord fell out at the same time. Not what I wanted. So the obvious solution was to put the access slit for the jack hole on the opposite side. I cut another prototype and the damn thing worked perfectly. _

So, on a Sunday morning in about 4 hours, I basically designed the BUD on a budget of less than 5 bucks.