What rhino commands do you use on a regular basis and think others don't know about?

I use alt to temporarily turn them on only when I need them. It prevents the frantic snapping to everything behavior rhino sometimes exabits in complex models when osnaps are all on…

Sounded good at first, but if I want to use Tab to lock the direction, I can’t anymore, because Alt+Tab is used by Windows to switch between windows.

Same thing I made aliases for snap overrides.
End , Per, Mid, Nod(for points) Nea, Qua,
These were engraved in my brain from 20 years using AutoCAD. This can help solving the Alt+Tab issues .

a) Run the regular “Split” command, then write “crv” (without the commas) and when prompted to select cutting objects simply pick the surface edges that you want.

this works for trimming too!- typing crv in the command line when prompted to select cutting objects enables surface edges to be used as curves for trimming. This will work in some cases where a surface edge will not do to how rhino treats trim curves in 3d space, vs how it treats surf edges in the same situation.

And the best part is that then you can write “srf” and switch back to trimming with surfaces.
Can’t wait for the “Surface/Curve” option to be added in the Command line.

I also requested this feature last month in the following topic:

Wish for Split: Add "Curve" and "Surface" options in the Command line Rhino for Windows

Years ago I requested for this improvement of the “Split” command to be made, and now I will repeat my request, because it’s too essential and could speed up the work that involves splitting of models multiple times per day. In fact, many Rhino users are unaware that couple of “hidden” options exist for this tool that are accessible by typing “crv” or “srf” in the Command line, hence they struggle to split certain models the way they want due to inability to combine curves, surface edges and sur…

Something useful I learned a few months back which is a major time-saver:
By default Rhino files are compressed when saving, which makes the files smaller but the saving times longer. Working on large files, often times it would take 1 minute or even more each time.
Fortunately there are Advanced Options that can change it:

FAST (but larger files) Save settings:

With the FAST settings, a file that normally takes 50 s. to save is only 7 s. to save. The size is 700MB instead of 300MB but I prefer way faster save than saving HD space.

Using WriteLocalTempFileWhenSaving also helps to speed things up but my understanding is sometimes it causes an issue (file reported as being read-only and unable to save_, especially when working on a network location, that’s why it is not enabled by default. In that case the solution is to switch back to the slow options.)

Nice. How do you access these options, and do you know how many Rhino versions it works on?

Heh. I believe in the old days there was Trim for curves and TrimSrf. The seemingly obvious thing to do is to combine things but it gets messy and then we want to tease them apart again.

You have to go to Tools > Options > Advanced, from there the easiest way to find them is by using the search field at the top.
Looks like WriteLocalTempFileWhenSaving is only available in Rhino 7, this one has less impact to save speed from my experience; UseCompressionWhenSaving is available in V6, too.
V5 and earlier Rhino version did not have Advanced Options exposed, so not sure if it was already possible, maybe via some test command.

Love this. Very easy to use, just need to re-brain my Alt muscles.
…and I still wish Cen wasn’t so dominant…

if you want to examine the curvature graph alone.
in the case of a scene encumbered by geomitry

A very underestimated command is _SelBrushPoints

, which is quite handy to use with a larger size such like 300 pixels on a 4K monitor. A single mouse click with the brush selection basically allows a quick selection of many control point simultaneously. Something similar does the '_Lasso command, but the former is my favourite tool for selection.

Other extremely useful selection commands are “Select arcs” and “Select circles”, but sadly they are not included by default in Rhino. Instead, you have to create a custom button and include the following codes inside their text fields:

I use this custom icon for these two commands:

Made my day! That command is awesome!

Enabling Spell Checker in the text field command
give it try 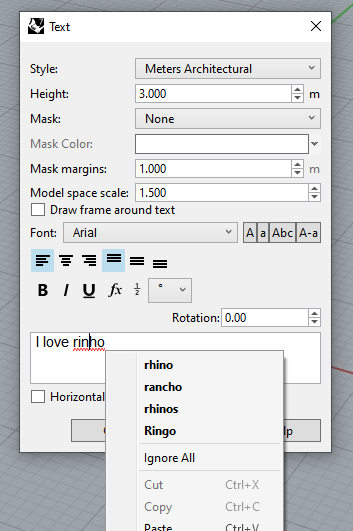 HBar
I had forgotten about it until a recent thread. It allows a point on a curve or surface to be moved to an exact location while minimizing the change to the curve or surface.

Thanks for this. I’ve used it forever in AC, but never imagined it was available in Rhino.

Hello - for one thing it removes the selection ambiguity that would drive people crazy if they were combined.

I never thought about that. It makes a lot of sense.

I was thinking that it’s interesting how some commands are split for various object types to simplify command selection.

I’m a pre-select type of user. So I wonder if the same logic could be reverse for those and some other commands. For example, if I preselect a curve, when I type in the command line the word ‘extru’ the autocomplete should give extrude curve at the fist option, because the autocomplete logic listed to the selection state and inferred this is a curves-related command Thai user is GPU v to be looking for now.

Another more useful example. When I type ‘extract’ the command lien shortly only autocomplete to the type of Extract commands that would be applicable to my selection.