What do you want to learn about photogrammetry?

why not just print large scale wax, hand work the wax as needed and cast from that?

check out Zacharyoxman.com he works that way…

The challenge with photogrammetry of small objects is limited depth of field.

You could try loading your images into photogrammetry software and see what you get. I use Metashape by Agisoft. https://www.agisoft.com/ You can download and try the software in demo mode which does not allow for saving results, or a free 30 day trial license is available.

Does it make sense to try photogrammetry on a very small detailed object, [with very small details]…? or is it better to save the time and effort and pay for a scan with a pro jewellery scanner?

Beautiful work, Akash. See what kind of a result you can get with the photos you took. If nothing else it will be instructive to learn by doing!

I would say if photographing a shiny object like this, the issue will be the change in reflected light as you move the camera around the object. You can still get a result that will process if you hand paint out the highlights, and even better if you use a polarizing filter, but there will be noise and areas that don’t mesh well compared to a professional scanner.

why not just print large scale wax, hand work the wax as needed and cast from that?

Kyle’s suggestion is also very good if you want to go that route, the issue being if you want to make multiples you would have to modify the wax each time, or make a mold from the wax to then do multiple castings.

Our 3D printing technology is used in a wide variety of applications. Mainly we create 3D printed models out of sand, plastic and ceramics. Find out more!

I think Kyle @theoutside was replying to one of your posts not to my question… as I can’t see the relation between his post and mine? as there will be no casting involved with this project, it all purely hand made. the mesh replica is needed to help with design and the planing of other parts.

but there will be noise and areas that don’t mesh well compared to a professional scanner.

It sounds like doing a scan is the better option in this case.

The challenge with photogrammetry of small objects is limited depth of field.

thanks David, the photos were taken in F36 to try and maximise the depth of field [don’t know if that was a correct setting]
I already tried with Regard3D, got a terrible mess of a point cloud after 8 hours processing.
according to this ZB tutorial the way to bring in the small details is with a texture map.

thanks David, the photos were taken in F36 to try and maximise the depth of field [don’t know if that was a correct setting]

shiny object like this, the issue will be the change in reflected light as you move the camera around the object.

Can’t he use something to kill the shining to solve this issue? maybe an easy to remove paint, or maybe something soluble like rice flour?

I’ve been thinking on trying to solve the other way around, I have some boat parts that are almost mirror shiny/reflexive, both exterior and interior. I tried using my phone camera, however meshroom gave me an warning that it would probably fail for lack of metadata on my camera (Moto Z3 Play).

Maybe I should try something that will work easily to try to setup my camera, but I have no idea how to do that.

Can’t he use something to kill the shining to solve this issue?

Yes, this can be done, and it can work well especially when you aren’t also wanting to capture the source photographs for texture information or vertex colors at the same time. Fine powders help, like a chalk powder or perhaps rice flour as you suggested, and then taking care to light the object well so it doesn’t flatten in the photographs too much.

I think the bigger issue will be reflections. I don’t think you will be able to get a good photo scan of mirror-shiny objects without doing a surface treatment first to take away the reflectivity, and that sounds like it would probably be an issue in your case.

As for the camera, I do most of my photogrammetry now with either a DSLR or my phone camera and sometimes get a similar warning, but if the photos come from the same camera and it is held in the same orientation the whole time, you can usually get a good solution if the subject is suitable for photogrammetry.

Perhaps PS-ing the images to greyscale + running [a batch] operation to soften the highlight on the gold…? would that be helpful to get better results?

I think it is good to keep as much information as you can, so color information is helpful or at least not harmful as long as it is consistent between points of view. This is also why you would want to shoot and process from raw image files if possible.

Batch operations to reduce highlights and deep shadows in PS or Lightroom are a good idea if you want to do the lighting of the object in another software (for rendering purposes or in a game environment or something like that), rather than capture and show the lighting as shot by your camera. I sometimes like to show an object or space as shot with the lighting it had already baked into the textures, but other times I would want to delight the model.

See this model posted by Thomas Flynn for a visual example of the distinction:

Here is a free tool provided by Agisoft for delighting a model after processing: 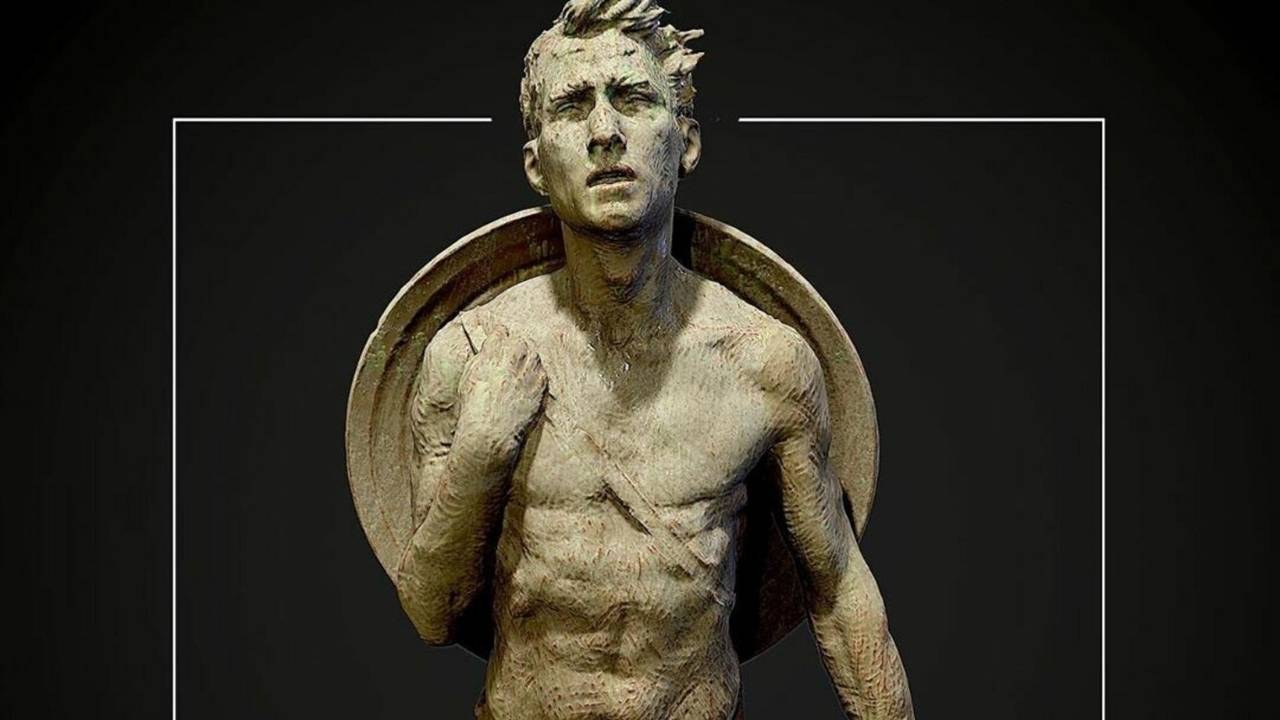 Get your free Vertex Learn courses!

I’ll be talking about my work in the photogrammetry arts, how I got into it, some opportunities I’ve seen there in the last 14 years (stemming from 3D scanning of sculpture), and showing a lot of examples. I’ll also talk some Rhino workflows for dealing with organic meshes, some scan cleanup and texturing in ZBrush, some Reality Capture stitching and coloring, and I imagine do a bit of demonstrating along the line.

Come hang out and ask questions if you like or just watch.