Jordi, just send an email to Günter Sonnenberg - his details are at the bottom of that Kajto web page and he’ll sort you out with an evaluation licence.

From personal experience - I would be cautious about installing Kajto on your work computer. I had issues with the beta where it completely overwrote some deep preference files, and had a very difficult time getting my Rhino 7 back to my own preferences. Like, the Gumball stopped working in Rhino. Related - Rob I’m getting ready to install it again on my laptop (for the above reasons) and would love to connect via Zoom or similar if you like to see how you are using it - I found it pretty hard to understand my first go around. They JUST came out with an English manual - do you have it?

I liked the way you could move the zebra stripes and not the model. I liked how it would make a surface to a mesh. All the analysis were helpful. The multi tool was iffy , but at least it was there. Many nice tools. It might have been you, Sky who may have told everyone about the sale VSR was having years ago. I got it very reasonable. —-Mark

Yup that was me! I was being sold for like $380 after the sale to Autodesk. An unreal deal.

Thanks for the warning Sky.
There definitely seems to be some ‘contamination’ as you switch between Kajto mode and normal Rhino mode. The only way I’ve found to get back to my normal looking Rhino is by turning the plugin off in the plugin manager and then re-starting Rhino. So far it seems manageable but I’m not in the middle of a deadline…!

I’m not quite up to speed with it yet, but once I feel comfortable then I’d be happy to have a zoom chat about tips and tricks! (I think it’ll be me learning from you though…)

Yes, agreed, it’s hard to get your head around first. I’m getting there slowly, the English manual helps but doesn’t quite describe the concepts fully. Some stuff is very similar to ICEM Surf, but they’ve also added some parametric constraints etc. Work flow is quite a bit different too. I think some of the crashes/difficulties I’m experiencing are due to constraints on the model that I haven’t understood or noticed and then I’m clicking away in frustration and then ‘pop’, it’s gone…

But I did manage to get a parametric hull surface modelled up with dynamic sections which got me pretty excited.

Give me a few more weeks and hopefully I’ll have more to share.

I was actually still struggling with the UI when I had to uninstall it and get back to real work, so you’re way ahead of me! I think that like VSR, the best way to learn Kajto will be peer to peer, so it might be worth it to cook up some sort of Discord group or the like, and for us to keep an eye out for other beta users.

Ok, give me a couple of more days though, just to get more familiar with it. I’ll drop you a message.

I guess we could have a ‘Kajto’ section on this forum under plugins? A bit like the render engines do?

Wouldn’t it be something if they are making it for AD to buy later.—Mark

Is he the only person that uses VSR tools ?

He is not the only one. Many of us still have Rhino 5 installed on our machines so we can use VSR.

I wholeheartedly agree with @sgreenawalt. The control point modeling (1) was great, and I love the idea of allowing you to increase the spans, having a face mode, etc.

VSR’s MatchSrf (2) and Blend were incredibly useful, allowing each edge to have different continuity (iso direction), real-time feedback (even while control point modeling the matching srf), and matching multiple edges was much cleaner from a UI perspective.

The projection base (3) is not odd, especially for the jewelry community. We place a lot of ornamental shapes on a NURBs surface, and a lot of surfaces do not make for good FlowSrf targets (i.e., a sphere with collapsed control points at the poles). In fact, I’d often use the projection base to build a target surface or curve for the flow commands. Yes, there is SPLOP, but it’s not good.

And with more and more 3D scanners targeting the jewelry market, even a small shop can afford one now. We make a lot of matching bands, and I love using a projection base on a scan to create a mating surface. It’s a huge help.

What’s wild is how good of an RE package could be assembled with only the 3 tools/functionalities listed. It also just perfectly fits a niche that is missing in this space - something higher quality and more editable than the auto surfacing packages.

I don’t have VSR,
But improvement like more control over MatchSrf it would be very appreciated also from non VSR users.

What’s this Kajto all about? is this T-systems a company owned by T-mobile? Are they the investors? They are using their logo, and the exact same favicon thumbnail on their website, but no mention of T-mobile other than T-systems? 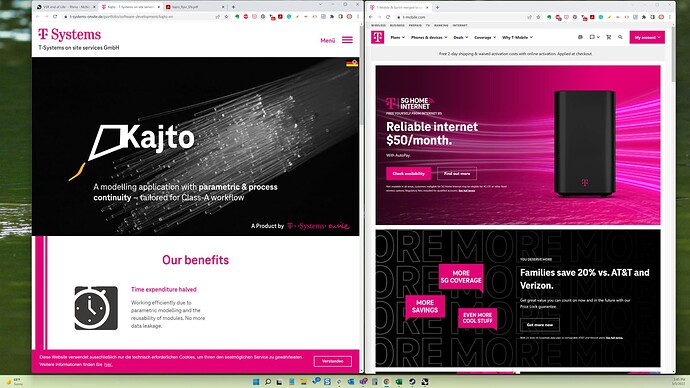 I always like to know who I would be buying my software from, just to know how long it will be around. Considering the reasons this topic got started, you can see why this matters, a lot.

T-Mobile and T-Systems are both Deutche Telekom AG companies.

Gustavo, to be honest I don’t know too much about them other than what Brian just posted and having exchanged a few emails with them. One of the guys I was in contact with worked on the original ICEM Surf program which is a good sign!

I’m not sure how long they’ve been at it with Kajto though. @sgreenawalt Maybe Sky can tell us when he downloaded the Beta version?

There does seem to be a chance this could be sold off if the parent company are specialists else where. That’s a very good point.

I see that makes sense, and since these tools are great for solving the ‘Metaverse to IOT Digital Twin Workflow’ (

) they should be able to fund this effort for a few decades no problem.

This, with zebras on, would save me so much time.

I have never used vsr.
I am not in the right position to give a reliable opinion for this plugin.
but I liked the videos that were shared by sky, they are a good general example of the improvements that can be added to rhinoceros.
in particular the windows which brings together several tools to modify the shape of a surface. (this is not necessarily to copy or imitate the commands of other software).
but the joy of working with tools merged into a single window and making various changes to surfaces in real time without having to leave the command is absolutely beautiful.
it is useful not only for the method of modeling with Béziers surfaces, but also for all people who use rhino3d, regardless of their sector.

just a very silly example. I still can’t understand why commands like matchesrf or blendsrf do not have boxes to show the zebra, curvature graph, point of controls. (I said it’s just a stupid example).
these three options have already been implemented in rhino for centuries but as separate tools!.
they are basically non-interactive during modeling. all simply, where they should be useful they are unfortunately absent.
I have the impression that the development of these tools was in the right direction at one point, then it was interrupted or changed philosophy on purpose. otherwise, I don’t think such silly things can escape developers’ heads.

You’re going to love Kajto, realtime zebras during editing with realtime sections. Zebras can be X,Y,Z or rotated freely or a few other options (rainbow too…). Realtime deviation from surfaces or curves to other surfaces and meshes (scans…oh yes…). Lots of other analysis tools too.

He is not the only one. I have used the VSR tools, too

Thanks. That’s good enough for now.