There a couple issues here. I have learned to use Rhino 5 layouts and see the Rhino 6 text styles as a possible huge move forward. Great! However I just converted one of my current projects to V6 that has several sheets of layouts and huge problems with visual displays, text location, text box size, lost title block ( which is a linked V6 File). Here are a series of images to help illustrate the issue.

Note: All of these images have the printDisplay on. Turning printDisplay off doesn’t change anything. I also disabled text glyphs no change.

Original Rhino 5 example sheet on the left (everything works!). Rhino 6 version of the same content on the right. 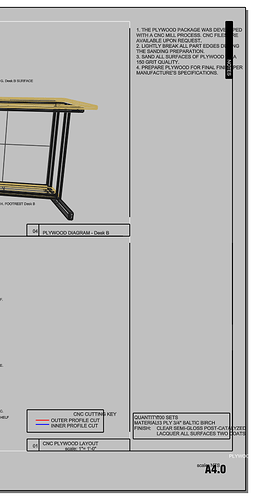 Weirdly enough once I click in a viewport the title block shows up but then goes away when back in paperspace. Even weirder if I go back into that viewport it doesn't come back on but I hit the other viewport it comes back. Like patty cake. (Seen below)

Text is getting a bit of a work over right now, so it is possible that some of this will be solved in upcoming WIPs, but to be sure if you have a clean and simple example of what works in v5 but misbehaves in v6, I’m sure they would be happy to have a file.

I’m seeing the block (it seems not just liked, but any block inserted into a v5 file) failing over here as well. It shows in the block manager, and you can select it (via selBlockInstance, or if you know where its insertion point is), but the block isn’t visible. It looks like this has been reported.

With the viewports opening in wireframe, is it possible you have a display style in v5 that you have not yet imported into v6?

I just completed a bunch of work on block display over the last few days. Please let me know if you are still seeing oddities in the display with the next WIP (probably available tomorrow).

There are probably combinations of annotation scaling and various other ways of doing things that haven’t been done right yet. I’ve recently fixed a couple of things that might have some bearing on what you’re seeing.

The difference in the way scaling is handled in layouts - global in V5 and per style in v6 - makes it hard to get the conversion right. I’ve recently seen cases where changing a setting in a style makes things work pretty well and we may be able to do most of those automatically when we identify combinations that cause problems.

Seeing screen pictures sometimes helps, but most of the time we can’t tell what’s causing problems without 3dm file examples.
As Sam said, a simple example of a v5 file that doesn’t convert right would help a lot.
A complicated file with lots of things to sort through is a lot less helpful because it takes a lot more work to isolate specific problems, but sometimes that’s all we can get. It just takes longer to get things fixed then.

Here are some cleaner/smaller files to dig into. There are the two pinup files one Rhino 5 and the other Rhino 6. I have also uploaded a title block so you can see how a linked insert file seems to go astray. As far as the Display going to Wireframe, I did confirm that I had not imported the Display settings so that appears to be corrected. I have included the display mode I am using also.

Thanks for taking a look!

That will help a lot. Thanks.
I can see that the inserted title block has some serious scale problems.
Other than that, for the most part it looks pretty close except for the paragraph spacing on the text in the upper left. Is that what you see?

If I explode the title block, the text goes to the right size too. I’ll work on it.

The other issue I am getting is that the titleblock only appears when you activate a viewport. It appears some other of the text style issues are not showing up. Perhaps the latest WIP has corrected some major text shift issues I was having, but it also could be multiple layouts will exacerbate some text issues. I’ll cross my fingers. Any help on the linked file issue would huge.

The scaling bug in he files you sent has to do with the units being in feet in the model and in inches in the title block you inserted. I have it figured out but it will be part of another fix in the next week or so. Thhaks for the files