I’m somewhat of a new user with Rhino.

I’ve tried doing a search for similar problem but can’t find an answer.

I have two objects that I would like to make into one.

I’ve tried using the Join command, boolean and also tried to seperately ( with each object ) to make a solid with the make solid command.

But nothing seems to work.

The second object is a copy of the first and was rotated 180 deg.

The odd thing is that if instead of rotating a copy 180 deg. and just do a mirror, the intersecting parts do allow me to join to make one object.

I’ve set my absolute tolerance to 1 mm, and by looking at the model I don’t see any part of the model that extend anywhere near 1 mm at the intersections.

I’m attaching the file and it’s much appreciated if someone might be able to tell me what I can do.

Hi BabaJ - yeah… a couple of things - Join works on surfaces that have open edges that are within tolerance of one another - make a box, Explode it to get six surfaces and Join to get a box back. Your objects intersect but do not have open edges that are meeting. Boolean operations would seem to be the answer - BooleanUnion for example - it does what you are expecting here, except that it doesn’t… The objects need to intersect cleanly, especially at the tolerance in your file (please see https://wiki.mcneel.com/rhino/faqtolerances). You can get there by carefully making some cutting planes as in the attached file, split the objects with the planes, and Join the relevant pieces.

Thanks Pascal for the suggestions…looks I’ll be able to make it work.

The splitting with planes was the answer. At first I thought it was going to be very laborious because I wanted to make a long ‘chain’. But getting the cuts in such a way that they were in ‘quarters’ let me get a fit that could repeat with longer ‘copy and paste with gumball’ operations.

Thanks for your input pascal.

Hi BabaJ - rather than copy/paste/move, check the Copy command from the Transform menu - or one of the Array* commands from Transform.

The splitting with planes was the answer.

Hi BabaJ, You should be aware that the absolute tolerance in your file is way too loose for the size of geometry you are working with.
If you want to do any operations that involve computing trim boundaries and joining edges that are not just planar cuts the loose tolerance will likely cause you big problems.
Your absolute tolerance for this should probably be somewhere in the range of .1 to .001.

Hi Jim,
Yeah initially I had it set to 0.001 but when the boolean operation didn’t work I tried setting it to 1.0 to see if it would changed anything, and just happened to leave it at that when I uploaded the file.

Thanks Pascal for the tip about Transform menu

I am having a hard time getting a cylinder like object to join. Any recommendations on how I should make this? 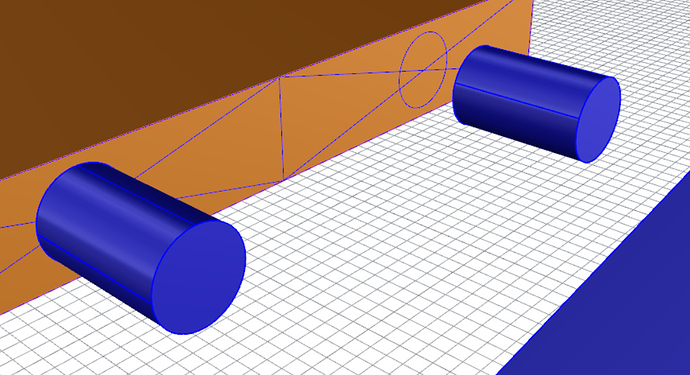 The cylinders looks like they are closed objects. They can’t be joined.

so which command should I use?

BooleanUnion will work if they touch each other exactly at the surface.

It seems the forum has gotten off its’ digest form.