there is a set of points (max. 100 pts), sorted in x direction. From the sorted set I would like to start the distance measurement with Item Index 0 along x axis. The set of points should be entirely connected and always by the nearest neighbor (closest point) started by Item Index 0. This repetitive calculation should be started by the result (closest point) of the previous calculation. It is not clear to me how to define this iteration and code with grasshopper components.

I searched about this topic and know that it is a asymmetric system type of the Traveling Salesman Problem. Unfortunately I am not that experienced with this kind of mathematical problems and python coding for finding solutions.

Thanks a lot for your help and time! 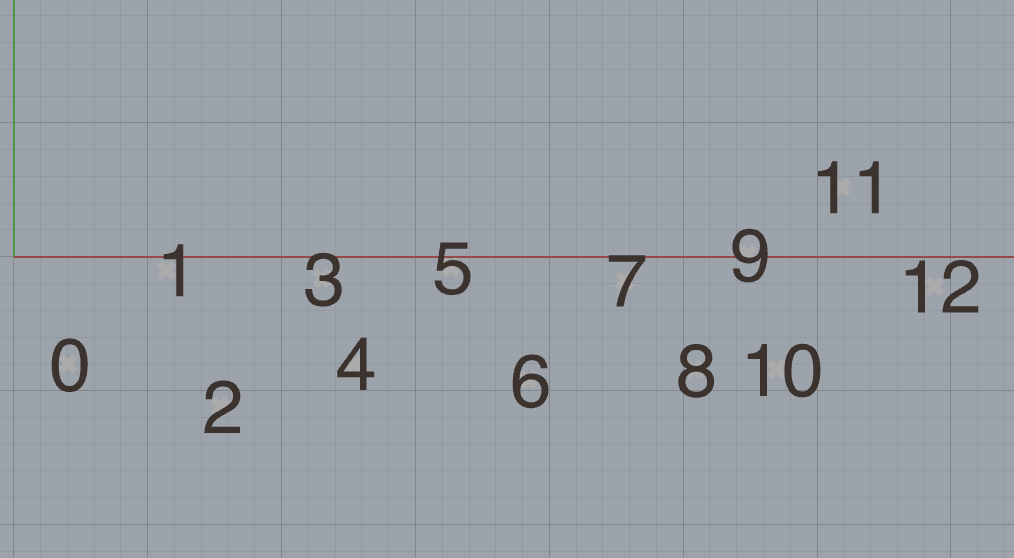 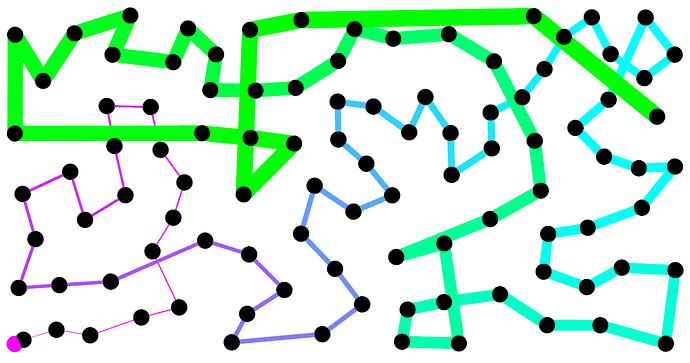 From a sample point a list of points will can be sequentially sorted by marching through each closest point until the point list has been exhausted.

Translate this to P (NOT a traveling salesman solution) if you are after an iterative proximity.

It’s unnecessary to presort the points, because a start point is defined and the script automatically evaluates its next closest point. This means that the presorting isn’t taken into account.

Here’s an example on how it works in three dimensions, with the start point being the one with the lowest z-value: 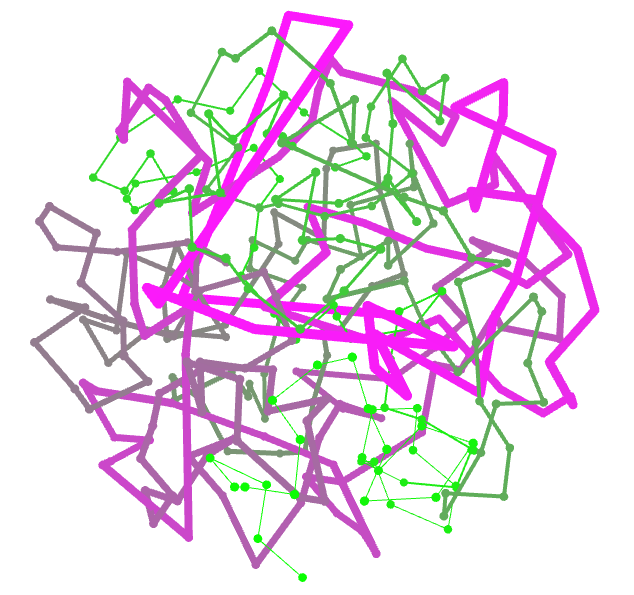 If you’re still interested in learning about the Travelling Salesman Problem, you can check out Daniel Shiffman’s video on YouTube - it’s for Processing but his explanation is great -, or my discussion and example from some time ago:

Hi guys, ORIGINAL POST | 23 Dec. 2018 I’m currently working on a genetic algorithm for the Travelling Salesman Problem. Those of you, who aren’t already familiar with the problem, it asks the following question: Given a list of cities and the distances between each pair of cities, what is the shortest possible route that visits each city and returns to the origin city? (cf. wikipedia) Returning to the origin city is not a priority for me. I’m focussing on the genetic algorithm, instead of a…

There is no reason to sort the list by X because 1) it was already sorted that way using MA ‘Pr’ and 2) it’s irrelevant using Closest Point.

Here is the Anemone way with Jitter thrown in to prove the point:

My coolest use of this technique was here: 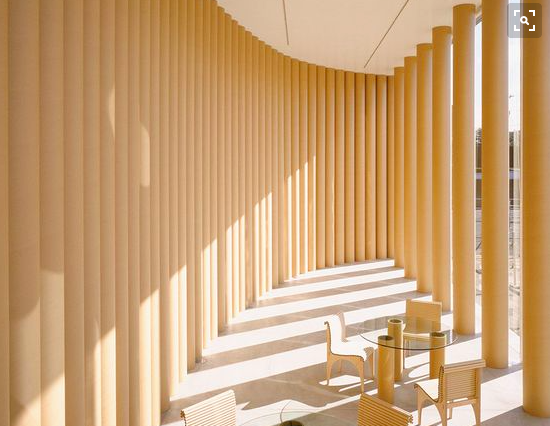 Hi! I'm making a pavilion that's going to be made using kaka robot. I've got this script that turns an image into lines and would like to use those lines as a… 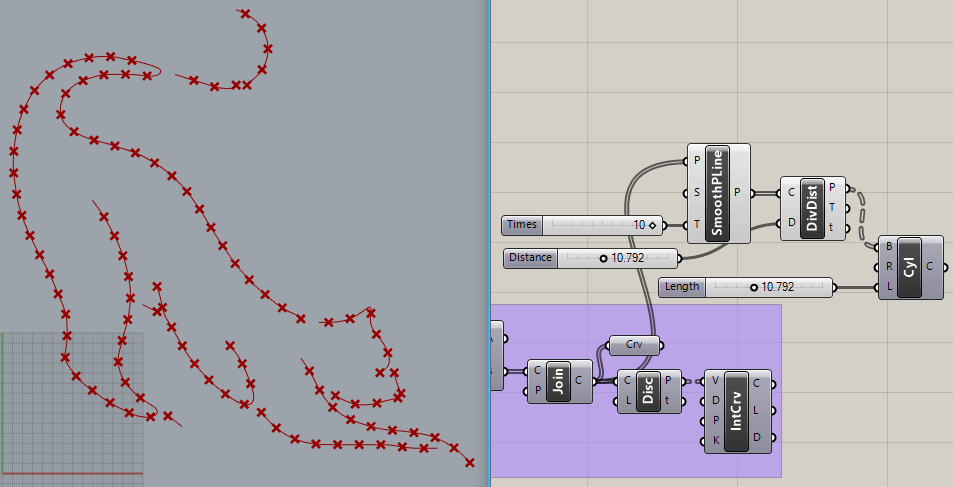 This is a slightly updated R6 version of that code that hopefully won’t lose the Image Sampler:
pavilion_2017Jan20b.gh (55.1 KB)

thank you so much for your lovely post. I need a little bit more time to understand your script and the overall topic of the math behind, but thank you as well for the recommended video. This could be a good introduction to the topic. I will check everything out.

Thanks again for your time and help!

When it comes to the transformation of the code by searching the second closest point, starting always from 0 of my pt cloud, I think I can not use .closestPoint() command (line 37) because it does not really produce a list where I can pick the second item.

Do I have to substitute the .ClosestPoint() command with a distance measurement command and continuing after that with sorting this list and picking the second item (or shifting the list by 1) to get the second closest point?

Do I have to substitute the .ClosestPoint() command with a distance measurement command and continuing after that with sorting this list and picking the second item (or shifting the list by 1) to get the second closest point?

I think I have to correct myself, sorry for being unclear. I wanted the second closest point from each individual point of the former result of your code (Sorted Point Output). Eg. connections between 0-2, 1-4, 2-4, 4-6, etc.
I hope that you can help me with this @p1r4t3b0y

I think I have to correct myself, sorry for being unclear. I wanted the second closest point from each individual point of the former result of your code (Sorted Point Output). Eg. connections between 0-2, 1-4, 2-4, 4-6, etc.

Have you already figured it out?

I’m asking, because your sequence above seems to be different than what you describe?

Just to be clear, you now want to connect each point to the closest point of its closest point?
I guess this would result in two separate polylines, and not one like before, like so:

Are you fine with that?

I think we are still talking about different ways.

First component:
Your first solution and code of the sequentially sorting by closest neighbour is the first part of what I needed and is already solved. Your code repeats the function of the closest point searching from the closest point again and involves all points (destinations) of the cloud.

Yes, my diagram above shows the result of what you’re describing, if I’m not mistaken! You can interpret the different polyline segments as lines, if you prefer, but does this represent your desired outcome?

I’ll see what I can come up with. May take some time though!

Hi @diff-arch,
first of all, thank you so much for helping me that much.
I draw the connections I am talking about in the following picture.

I hope very much that this makes it easier to understand.

Here’s what I’ve come up with!

I hope this helps!

Thank you so much for your help. To be a able to learn from you I have just a few more questions what you did exactly.

You used a pt_cloud that starts reducing itself from start > you defined a variable “closest” that represents the closest pt with an index > from here I do not understand what is happening. How can an index represents the distance to a point and why is the second closest point the result of “closest > -1”? It is also not clear to me what “return” does in your code.

That is the last if condition with the name doing?

Thank you so much for your help.

You used a pt_cloud that starts reducing itself from start > you defined a variable “closest” that represents the closest pt with an index > from here I do not understand what is happening. How can an index represents the distance to a point and why is the second closest point the result of “closest > -1”?

Haha, it doesn’t represent a distance, just the index of the closest point.

First, we instantiate/create a point cloud that excludes the first point - hence points[1:] -, which means get everything from points starting at index 1. It’s called list slicing in Python.
We exclude the first index because, for each iteration of the for loop, we first delete index 0 of the point cloud, to avoid the closest neighbor search to find the “real” closest point, because we want the second closest. However, the first iteration iteration is an exception. Here we’d have to delete index 0 and index 1. This could also be done with an if statement inside the for loop, but I find this more elegant. At the very first iteration, we have to delete index 0 to prevent the closest neighbor search to find points[0] for points[i], where i is 0, meaning itself. The iterations after that, this isn’t a problem, because we already removed the current point with pt_cloud.RemoveAt(0) at the previous iteration.
Your absolutely right that pt_cloud is a sacrificial container, from which we delete items that we don’t need anymore.

Inside the for loop, we go through all the previously, sequentially by distance sorted points one by one.
First, we check if the point cloud has less than or equal to 1 point and if so break out of the entire loop. This is necessary because we need at least two points! The first one would be removed from the point cloud during the following step, and the second one would be the only possible second closest neighbor to the current point points[i].

As you noted correctly, now we search for a second closest point, but pt_cloud.ClosestPoint(Points[i]) returns the index of the closest point in the point cloud, which is fine!
We don’t really need a distance, since only the second closest neighbor can be found in the first place. Remember, we removed the closest neighbor before, with pt_cloud.RemoveAt(0), and points[i] can’t find itself, because it was removed at the previous iteration or for points[i], where i is 0, already omitted while creating the point cloud.
All that remains, is to check whether closest is greater than -1, because pt_cloud.ClosestPoint(Points[i]) return -1, in case it didn’t find a closest point.
If closest is a valid index, we append the closest point from the point cloud to the sec_closest_pts list.

Lastly, sec_closest_pts is returned from the function.

It is also not clear to me what “return” does in your code.

The return keyword is used to return data from a function or method. A method is also a function, but lives inside a class.

If you want to get something out of a function, you need to return it at the end or even a strategic place inside the function. You can read more about return here.

That is the last if condition with the name doing?

if __name__ == "__main__": executes the code after it, only if the Python file itself is run. If it is for instance executed as a part of another Python script, the code from the if statement is not run.
It’s a nice convention to use it in Python, but not really necessary in the context of GHPython.
You can read up on it here, if you’re interested.

For GHPython and Rhino.Python, you can find some great resources here. There’s also a great variety of Grasshopper specific Python tutorials on YouTube.
For learning Python in general you should visit this site.

It still works because the input Points is a global variable, but should be corrected to prevent future errors.

Few days ago a friend of mine called to talk about his upcoming trip to Europe as part of his work. He will be here for a week and have thoughts about visiting some places around within his limited…

Thank you so much for all this extra information. I will go through this and learn from you! Best!

One more thing about the result of the code. The input has a length of 13 points. The output should have 12 points. I thing that point no. 11 has the problem that the second closest point is 12, but is already connected from the path of your first component.
Do you know how to get the output with a length of 12 points?
Best!

The input has a length of 13 points. The output should have 12 points. I thing that point no. 11 has the problem that the second closest point is 12, but is already connected from the path of your first component.

Do you know how to get the output with a length of 12 points?

Why do you need this?