After a long time I’m back to trying airplane design

I’m trying to figure out , if there’s a way to make a nice surface over different profiles along 2 rails.
The aim is nose cone to the airplane and for my ease of see I did it as a half.
I tried differnt ways (in the picture) and always got same “bump”.
A better result which I got is by placing additional curve but I guess is not the way to go…
I also tried loft but without sucess…

Is there a way to get nice looking surface over presented below curves?
How Boening is doing that 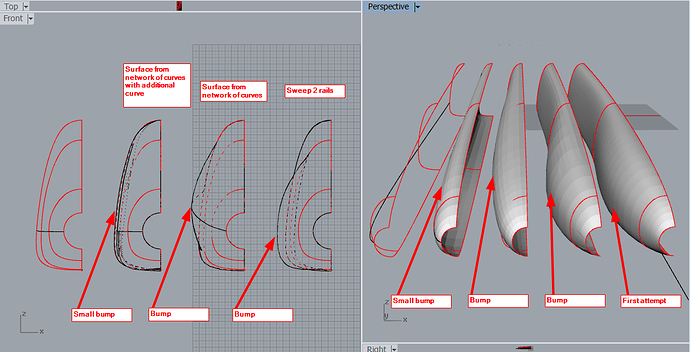 Your curves varying degrees and point counts make things unnecessarily difficult. I would build this with bezier surfaces that you can point edit. To create a smooth manageable form.

Thank you Stratosfer for your suggestion.

I did test that way - segments looks better definitely.
I stuck with one issue here - smooth transition between segments

Regardless how I did the segments

I didn’t find a way how to join segments smootly.
Merging surfaces gives:

Tries also other know to me ways - and failed…

Maybe another way -what to modify (slightly) in presented cone that one standard procedure like sweep 2 rails or merge surface will give smooth result?

Thank you for a support,
Codi. 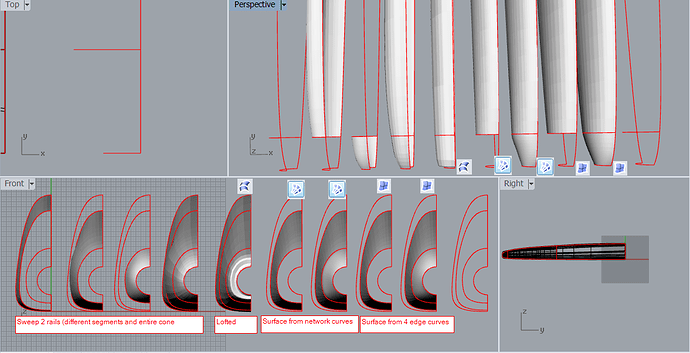 Do yoy have facet display mode turned on or smooth one?

Is rebuilding curve not an option?
The middle one has many points, and with rebuild command maximum deviation is 0.05mm with reducing point from 37 to 12 points for example.

Also changed the deg2 curve on the smallest cross sec to deg 3.

After doing that and creating surface with edgesrf(with 4 curves),
you can use matchsrf to make the transition to curvature.

Then mirrorred in the end. Checked with showedges (naked edges) and looks ok. 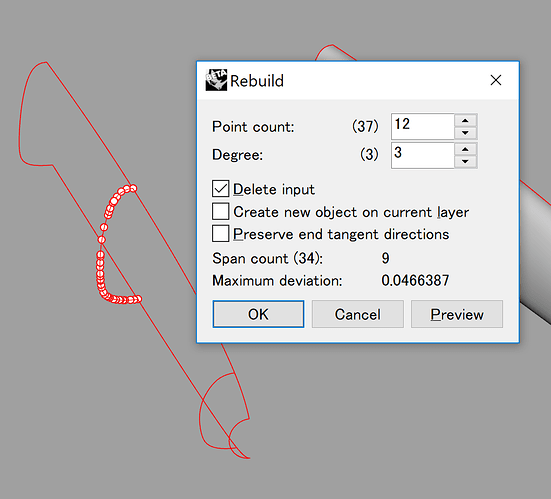 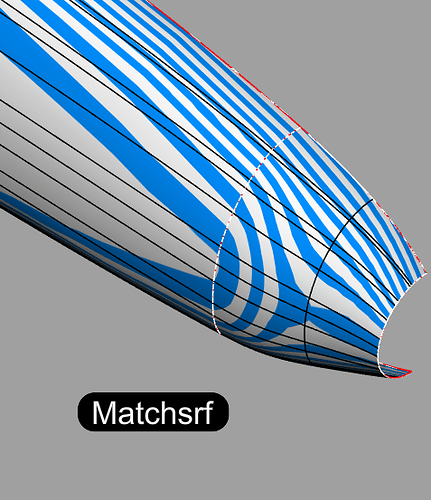 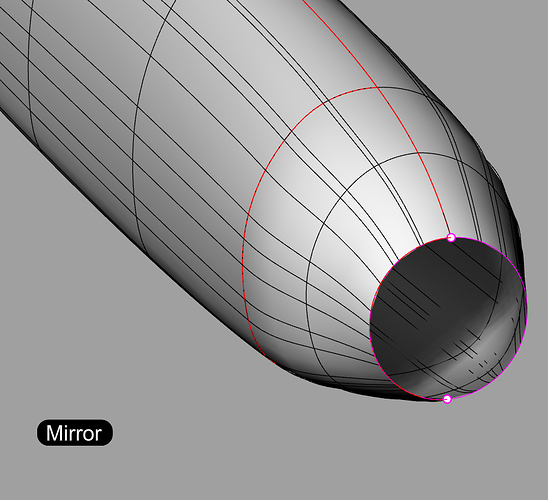 Toshiaki_Takano, thank you - I learned new things about surfaces

Rebuild curve helps a lot and now situation is better.
It is now exactly as you wrote and additionally I tested merge surface vs match surface.
Match surface gives really nice controll over matching but produces some concavity.
Merge is not so good at junction but no concavity.

Could you advice how to modify first segment to get convexity where now is cocavity?

There will be later a cap at the tip (part of sphere) -I will post it next. 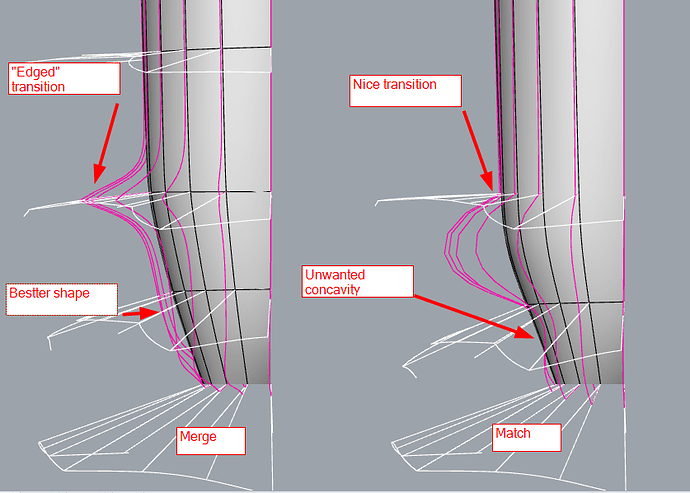 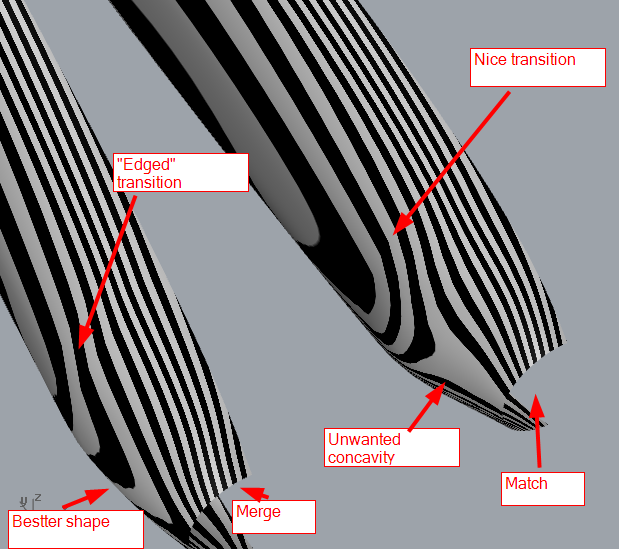 I placed a cap (I can’t change it) it must be a part of sphere.
The first curve I could slightly modify but here is what I got the best.

Could first segment to be build in a way that it fits to the cap (must be a sphere) and a second segment (small modification possible) without any “concavities”? 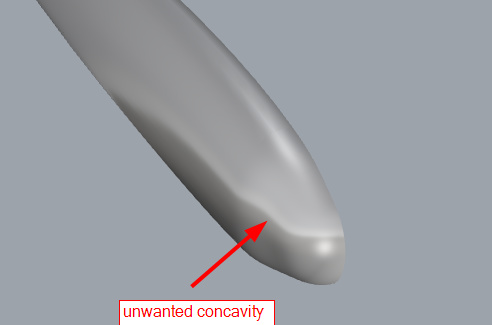 I might have used curvature continuity when doing the matchsrf, setting that to tangency might be better.

If you have a sphere, I’d use the edge of the sphere as one of input curves to create the surface.
After that if transition doesn’t look good, you can try matchsrf with multiple edge option.

Below is with the tangency option of matchsrf. 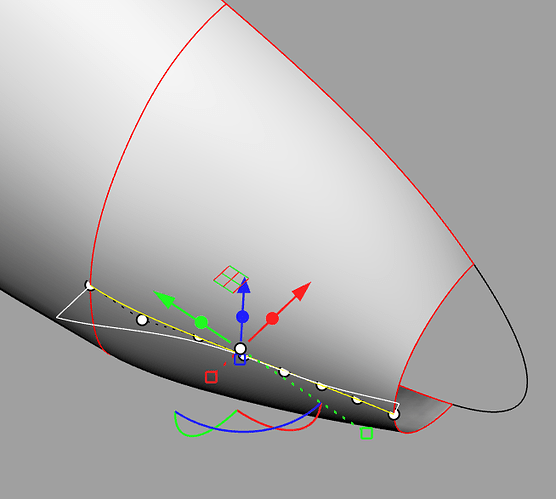 Actually, forget about the edgesrf for this surface.
Use blendsrf not that you have a sphere edge that you want to connect to.
For the sphere, since it is deg2, the edge seems to be split into two.

When doing the blendsrf, select chainedge option so that split edges are selected as one.
You have better control of how the surface goes, you can also try curvature continuous transition as well.

Wow, so many new things to try - thank you.
At the moment I’m trying to create surface with the sphere edge.
Whenewer I select edge it is splitted by 2 and makes problem - naked edges.
What could be wrong? 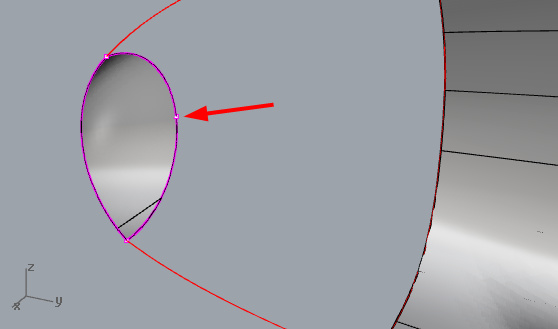 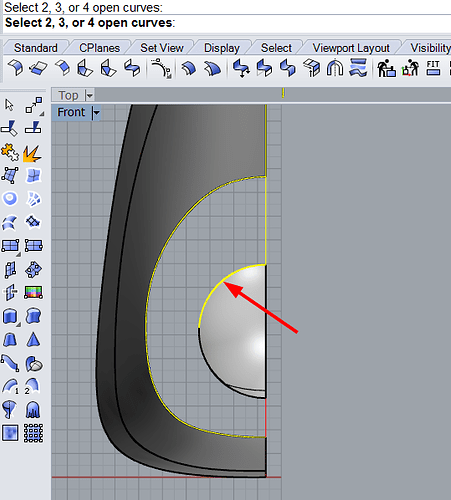 Regardless of the issue with 2 edges after sphere cut, I followed your recommendation.

Thank you very much for your support and knowladge sharing !

P.S.
Below the result which I got - a small issue to be corrected but I will go with given by you recommendation. 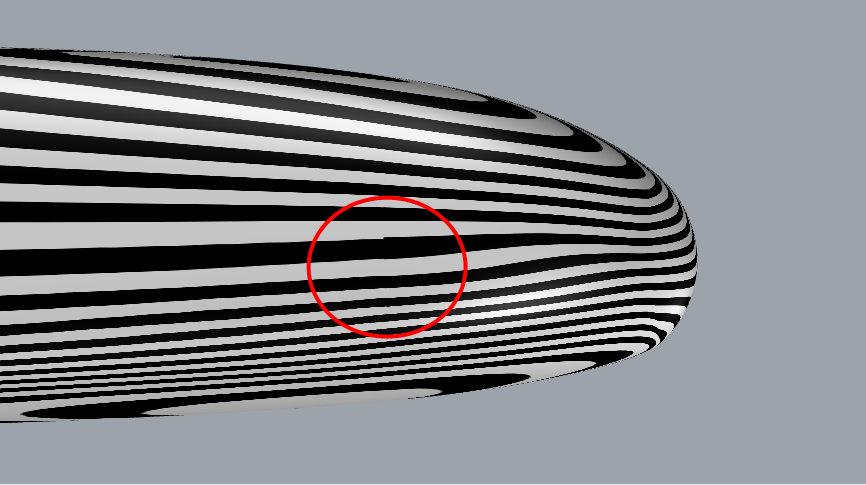 I’m not sure, but I think that part is made by deg2 curve, and should be rebuilt using deg3.

what you can do if you don’t want to rebuild the curve, is I guess split the sphere at and make it into two surfaces.
you need to create additional curve from the split edge to the
main surfaces you already have.
->this can be done by blendcrv if you extract iso curve on the main surface using extractisocurve command

But, to get the control, I’d use blendsrf tool. In the command line there should be option for “chainedges” which enables you to select the both edges of the sphere which you have shown in the image.

Great! Blendsrf has great control.
I wish the matchsrf would also have more control for how the surface is made.