I’m having some trouble understanding this odd little nuance when printing this layout. I noticed recently that I’d been essentially chasing my tail for a few weeks getting this tiny little aspect in a corner correct. My gut instinct is there’s some odd behaviour with the font I’m using (Gill Sans Light) and basically it means I can’t align text objects correctly. Does anybody recognise this behaviour?

It’s such a tiny little insignificant thing but I thought, hey, it’s a reason to register and ask why. (bottom right hand corner, by the way)

Purchase a legal copy of Rhino.

Okay then, many thanks. 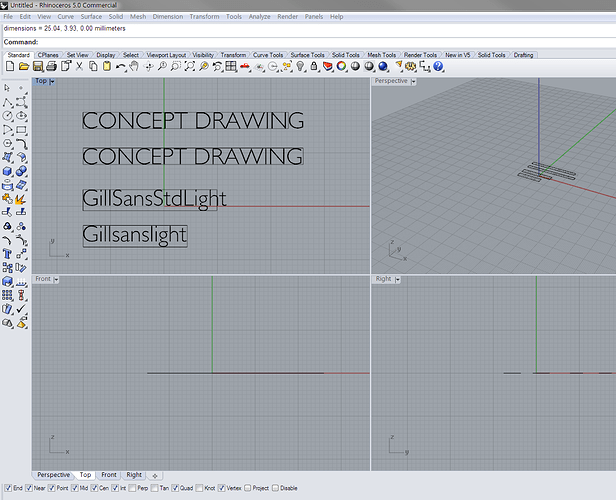 I don’t appear to have those fonts on my PC but I do see a problem with the bounding box for Gill Sans MT on RH5. Gill Sans MT Condensed is behaving fine.

Development on RH5 has stopped and I tested this on the WIP for RH6 where the internals for text are totally rewritten.

The same font appears to be working fine here:

You can download the WIP from the Serengeti category here on Discourse.

@lowell, RH5 presents me with more / different fonts than RH6, is that as expected?
RH5: