Slow down due to auto points turning on

Hi,
I do like the auto points turn on when one selects a curve, but I notice in this heavier file that curve selection now has a definite lag because the points have to turn on in all viewports. Maybe a way to turn this behavior on and off easily for these heavy files.? Because I just want to move the entire curve not the points so I do see a draw back to this in heavier files, this file is around 198 meg.
Thanks,
RM

You can control the auto on feature here… 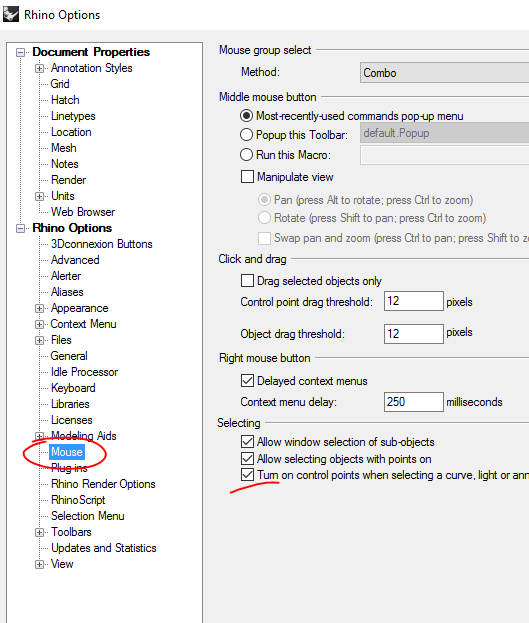 My guess is that some threshold is needed - turn 'em on if there are 50 or fewer, something like that. I’ve turned this off, myself, even though there are cases where it is helpful. I also turned off selection with points on - I was selecting curves and surfaces by mistake all the time, going for points.

Hi Brian Pascal,
I like it but now I am running into areas where I need to control it’s behavior as I use V6 more.
Thanks for the quick help, I guess we can macro this on off? Maybe there should be a checkbox somewhere my vote is on the osnaps toolbox?
RM

@3dsynergy this doesn’t make sense to me. When you select curves (even if points don’t turn on) all the viewports redraw to highlight the curve. Can you please post a model so we can see the behavior you’re describing? I think it’s important to allow users to turn off this feature if they don’t like it, but you shouldn’t have to control it just because it is slow in some circumstances.

I guess what I’m saying is: “this should just work, and if it doesn’t, there’s a bug”.

Hi Brian,
If I have four viewports open in a heavy file just selecting a curve I can count a lag in the time it takes to display the points before I can grab and move the curve. I noticed it only happened in this large 171 meg file but now I am not seeing it since I cleared out and changed some meshes. I’ll keep an eye if I see it again. I would like to be able to quickly turn it off, it makes selecting in some instances harder and it can occasionally be distracting when I only want to move a curve among many other items.
Thanks,
RM