As I wrote before I’m mainly a Modo user and a fresh Rhino user. I’m learning Rhino hard lately and I see more and more differences. Some of them are better for Rhino some for Modo. I don`t want to offend anybody with my proposition.

In Modo when I look on layers I always see which mesh layer is empty (without any geometry). 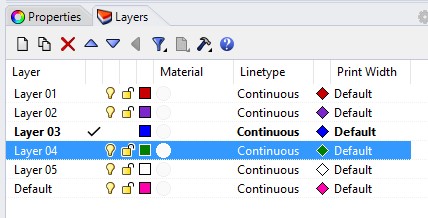 In Rhino I can’t see where geometry actually is. Maybe I`m missing something.

I know about that tab:

but copy/cut-paste method is much faster. Maybe there is some key shortcut which I don`t know.

1 Like
[Feature] Selecting an off layer shows temporally 3D content objects so that you can inspect them in a simple fast way
mdesign (Marcin) August 16, 2020, 7:05pm #2

OK. I`ve found filtration option on layers tab but I still think that my request may be helpful.
If not then please omit it. 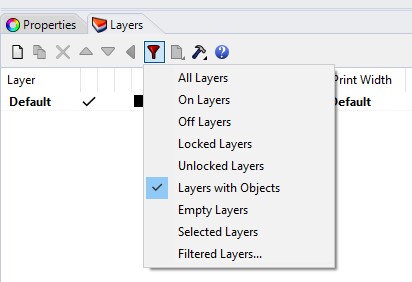 To copy object from one layer to another:

This works for me but it would be nice to learn a better shortcut.

The gray color for layers’ names that are empty would we absolutely awesome to have in Rhino.

It’s one of the most useful file organization features fo Modo.

@gustojunk It could be also italic letters or gray color as you said. I’m glad that you like it because I’ve noticed how much I like it at the moment when I haven`t that feature in Rhino

I’ve found one more way for moving geometry between layers but I still think that ctrl-c or ctrl-x and then ctrl-v after that is the most natural way of moving geometry between layers for fresh ones like me. I have to also admit that last method is a fast way of migrating things between layers but it’s also hidden to user without any tool tip for that action. I’ve found it in that movie by accident: https://vimeo.com/showcase/6192819/video/352293858 . It’s hidden also because you have to pick layer name. If you pick everything else it won’t work (you will change layer color, lock layer, hide or set default) Picking name is not obvious but it`s fast for sure.

I’ve found also that Modo allows for geometry only on highlighted layers and you know always where is that mesh. In Rhino you can highlight layer A and select geometry from layer B. It’s also confusing for me. When you wan`t in Modo select geometries from multiple layers then you have to highlight multiple layers. I think it helps me to know all the time where my geometry is (on which layer). I look on highlighted layer and I know that one of that layer contains my geo.

Yeah but for the sake of organization you really really slow down the workflow, and you require people to always have to be away of, and interact with the layers window, before doing any clicking on the viewport, if you are in subObject mode selection.

In Modo I actually override that entire behavior by having a Select_That_Mesh script bound to a shortcut (Control + Shift) so I can click in any object on my viewport, and that script is looking at mouse input and going ahead and making that objet’s layer active and allowing me to select it.

This is also completely different of how Rhino works. I want to make sure we are not trying to say: let’s disregard how Rhino works and make everything just like Modo. That would be bad. Really bad. There’s a reason Modo such a niche product: it’s dense to learn.

The mini-request of making a layer name gray to show that a layer is empty makes no confusion to anyone, I’d adds functionality, without adding also any new cognitive load.

Understood. I agree. You are right. That last thing would change the current workflow too much. That is not my intention.

I like many things in Rhino that I would love to see in Modo. For now, mostly commands because I used to that workflow for about 11 years. Things that I like in Rhino more than in Modo I will post on Foundry forum for sure :). I understand also that both software evolved from different background and should be treated differently.

I don’t see Modo evolving much at all in the last 5 years. It’s a shame seeing how The Foundry, under continuous change of ownership by different clueless private venture folks have taken Modo off the good path that Luxology started and completely missed the opportunity to make it a much better product. All their best developers are gone too. But that’s a whole different topic

I keep looking at Blender, it’s still nerd AF and not polished enough, but I think that’s where the future is for us, as a Rhino companion.

I agree too. I use Modo because I used to that. I like falloffs, workplanes, snapping, shading, and V-Ray for Modo. I know that modeling is almost the same on both but Blender is going forward fast and have more plugins to choose. I wait for Blender V-Ray and Redshift. This will move a lot of users from Modo to Blender. Today is my day of extending Modo maintenance. I decided to extend maintenance mainly because fixing the speed of booleans soon and V-Ray 5 over the corner. This was a tough decision. Fortunately, I’m on a fixed license so I will have the current version forever. That’s why I prefer Rhino over Fusion. I like to have a license in my hand than to borrow it. I`m learning also Blender on the side but currently, I chose Rhino to learn.

It’s one of the most useful file organization features fo Modo.

On the tracker page, Steve Baer suggests a column showing how many objects are on each layer. I think this is a good solution and useful in other scenarios, such as checking layers have the same number of objects.

Would this column show block definitions as well, or would that be a different column?

I have never understood why, in 20 years, McNeel has never included a feature in the layer manager where a selected layer can be expanded with a click to show a list of all objects on that layer, with the capability of highlighting each object on the display as it is moused over in the object sublist. The sublist would just need to contain the name if there is one, and some basic info, sufficient to uniquely identify it, that is included in the properties detail page. Clicking on the object in the object list would select it.

I have never understood why, in 20 years, McNeel has never included…

This is why we can’t have nice things.

We ask for a simple feature. They come up with a better way. Now we want moar, moar, moar

I do it too, I just think it’s hilarious, we are hilarious.

Thank McNeel for putting up with us

That would be cool too, but would be even better if it grouped everything by definition, surfaces, polysurfaces, closed polysurfaces, meshs, closed mesh, subD, closed subD(is this a thing or is subD always closed?).

And in this same list of objects, we could modify their names, if no name, could be just numbers or generic names, like solidworks does with multi body parts.

That would help a lot for renaming objects for rendering as well. well, at least the workflow I picked up with my internship using keyshot, I would chance objects based on the material they would receive, then add a generic material so when I import in keyshot they are all linked and I only have to apply the material once.