Downloaded Rhino 7 and continued working on my file with it. This morning, I opened my file and the program didn`t respond (which occurs pretty often since I installed rhino 7), so I closed it. When I opened it again, the shaded modus suddenly appeared a very dark grey and the program doesn’t run completely fluent anymore. I deinstalled rhino completely and redownloaded: it didn’t help. Also, I have this problem with every other Rhino file, too.

Please run the SystemInfo command in Rhino and copy/paste the results here.

ATTENTION:
No graphics device is being used. Either an error occurred on startup, or certain devices have been disabled.
See below for any possible configuration changes that may help resolve this issue.

Hmm, this appears to be the problem - 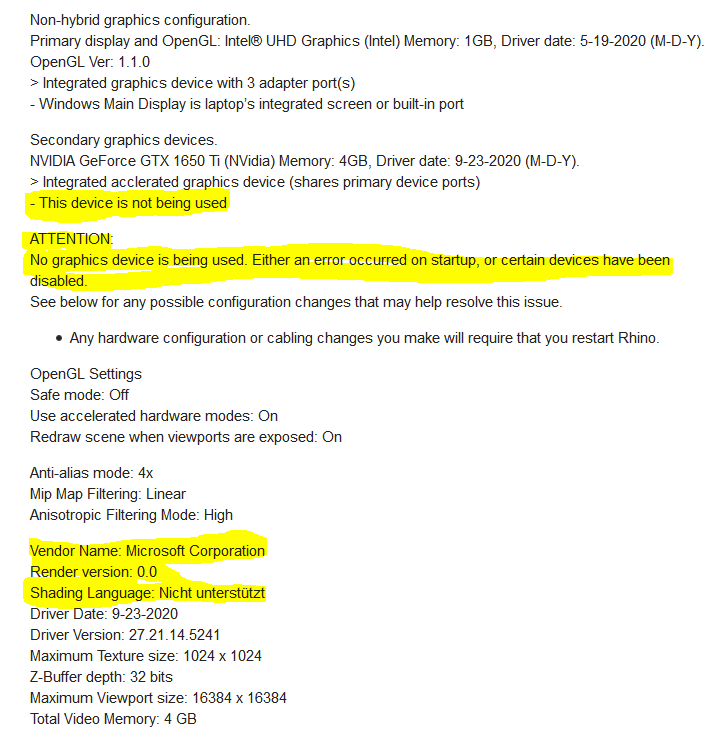 Maybe your video driver got corrupted - I think I would start by downloading the latest driver from NVidia and try installing that.

Hey!
First of all thank you for your help!
I am pretty much a beginner when it comes to Rhino, so I didn’t know how to find out what was wrong! When I sent the System Info to you, I read it closely and figuered I maybe have to run some updates. Did that and now everything works just fine!
Thank you again for this tip