How to selection objects without the need for a shift key in Rhino!؟؟؟ (via settings or macro)
similar Autocad
@pascal

Can you give us more specifics about the problem you have? Commands which can take multiple objects let you select them without using Shift, as do things like a window selection even when a command is not running. So what is the issue you are trying to solve?

Are you looking for the SelBrush command?

I dont’ know if this is what you are looking for …

Here is a script to select more than one object, whithout using Shift.

Just use the command _Select…

But I think this does not answer the OP’s question. There are dozens of methods to select multiple objects without using Shift outside of a Rhino command, but all involve invoking some other selection command like Select or SelBrush or Lasso or something similar… or using a window.

There is no method in Rhino to individually pick select multiple objects outside of a command without using Shift. That’s just how Rhino works.

Just use the command _Select

… One more Rhino Command I had forgot about …

Well, perhaps that can be tuned up…

But, as a general statement, you are trying to change Rhino’s general selection behavior for multiple objects outside of a command. That’s unlikely to happen, so you will always need a workaround.

#suggestion use option to Rhino that we able to use Hold ShiftKey to add Selection or not! simlar Autocad 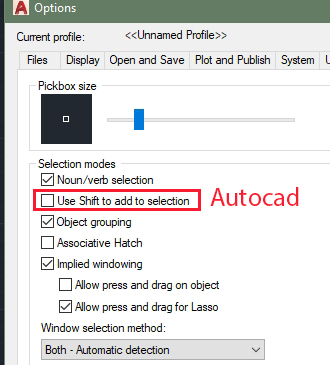 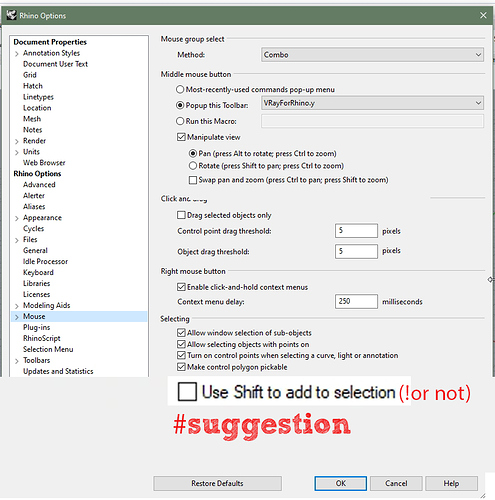 @architect.civil5
Do you use a mouse that has any programmable keys?

Program a key to Shift

Logitech G502 is probably the best mouse for Rhino. It may be a bit large for those with small hands (usually women), but features a very convenient array of buttons and great customizability. The scroll wheel also has three integrated buttons (a standard vertical press plus a side tilt to either direction) that further expand its abilities. For example, I use the tilt function to show and hide the CPlane grid.
Also, the scroll wheel coud be “unlocked”, so it’s very usable in situations where the user needs to scroll across a very long list of layers (or long Excel sheets, webpages etc).

I may be missing something here… the command ‘Select’ does exactly as the OP requests: type ‘select’ and then individually pick items until you’re happy. OK, you have to initiate the command, but seems fine to me.
Interesting that the Select toolbar tab has every type of Select option except the simplest ( _Select)

I’d have thought it would be trivial to write a command for _SubObjectSelect (or SelSubObject) that works exactly the same way _Select does?

I’d have thought it would be trivial to write a command for _SubObjectSelect (or SelSubObject) that works exactly the same way _Select does?

It’s not completely trivial, but it is not too hard. The best thing would be that _Select also obeys the sub-object selection filter when active - I think this should be added.

Edit - I put in a youtrack item for this - https://mcneel.myjetbrains.com/youtrack/issue/RH-57481

OMFG didn’t know it was a thing…

you are right, that would do it.

The Rhino community is amazing. Just like its developers. I love the fact that every user could directly be part of the development and Rhino is being improved based in people’s opinion and suggestions.