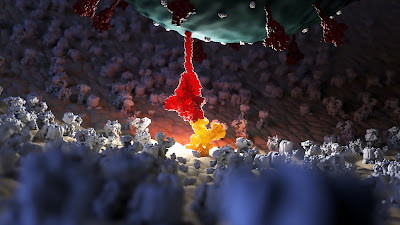 Image modeled with Rhino and rendered with V-Ray for Rhino by Ing. Luca Borro

Protein-protein interactions (PPIs) play a key role in many biological processes and are intriguing targets for drug discovery campaigns. Furthermore, advancements in experimental and computational techniques are leading to a growth of data accessibility and an increased need for the analysis of PPIs. In this respect, visualization tools are essential instruments to represent and analyze biomolecular interactions.

“The first step to prepare the figure was to identify the ideal size of the figure components, such as the diameter of the viral capsid and the length of the spike protein. In the cryo-EM structure of the SARS-CoV (Neumanetal., 2006), the diameter of the viral particle ranges from 82 to 94 nm, excluding spike proteins. Based on this evidence, we used Rhinoceros (McNeel), a 3D CAD software, to model a spherical viral particle with a diameter of 88 nm. The length of the spike protein was measured on the electron microscopy images reported in the same paper after properly resizing them based on the 88 nm of virion capsid measurement: the longitudinal size was established to be about 12.40 nm. The Image scaling was then processed in Rhinoceros software (Rhino 7) using Scale in all dimension function.”

Read the whole scientific article and how they used Rhino…