Rotating rod that bends from gravity

I’m trying to create a long, slender metal rod that can rotate like a dial. I’d like the rod to bend due to gravity. I feel as though I’m close, but I cannot figure out how to maintain the angle of the rod—the entire rod just collapses straight down.

I’m imagining results like the sketch below with the rod at different angles.

You need to anchor 2 points to control the tangent, then rotate the target position for one of them

That makes sense. I was trying to anchor a line segment instead which I don’t think would work at all.

Thanks for helping me out!

What would be the correct way to simulation the waggle of two lines plugged into the same solver component?

Just repeat the same goals on a new geometry.
If you want to use the same setup with multiple rods going through the same point, you’d just need to move the polylines back one segment, because I used the penultimate vertex as the pivot: 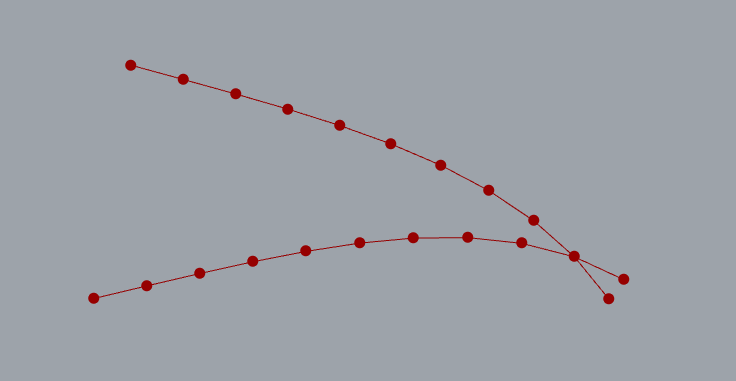 The premise of this inquiry was the idea of creating clock with bending hands that would then warp the layout of the hour and minutes marks.

Nice!
I’m surprised the arrangement of the numbers is so symmetrical though. I would have expected them to get more twisted around clockwise - since the angle at which it suddenly flops over isn’t a reflection of where it flops to. 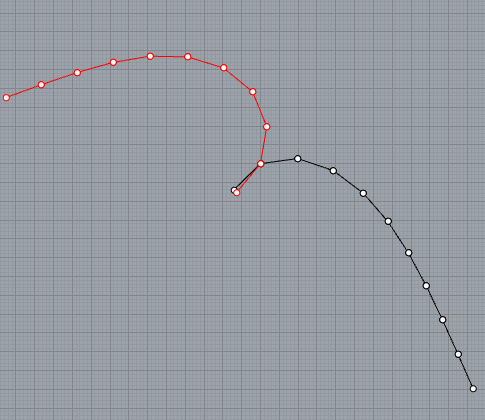 Don’t many people already have a hard enough time reading an analogue clock? You’re just going to confuse them further.

Maybe you can help me out here because this was an issue I was having when I was trying to run simulations.

To generate each frame of the video, I used the zombie solver set to a high number of iterations—this is why the arrangement is so symmetrical. When I used the regular solver and set the angle slider to animate, it moved too fast to be accurate for clock hands (which ideally would move at a very slow rate). This was causing the rod to twist too much as it spun (kind of creating a spiral shape).

I know there is some inaccuracy around the positioning of the upper hour/minute marks because, like you say, it would take a bit longer in order to get the flexible hand to flip over the top. It is possible using the standard solver, but I guess the main issue I was having was getting it to move slow enough to produce an accurate animation.

Is there any way to hook a timer up to the slider in order to control it’s speed. I believe the way it works now is, if you set it to animate, it will output the frame, and then immediately move on to the next number.

That seems like something that would be nice with this clock - at around 5 or 10 past the hour (depending on how heavy and flexible the hands are), there’d be a sudden tipping point.

For making animations you could use this - a script that calls a step of the solver with each update of the slider
(it doesn’t actually matter the values of the slider - since it’s just making use of the way that when a boolean input is given a number, it reads 0 as false and anything >0 as true)
sliderstep.gh (50.6 KB)

I appreciate you providing this script. I want to give it a try, however, it looks like I could be missing an assembly. It’s saying “The type or namespace name ‘KPlankton’ could not be found”.

I think you should be able to just delete that ‘using KPlankton’ line from the top bit of the script. It isn’t actually using that library at all here, I must have just left the reference in accidentally.

Okay, I got it working…pretty cool little tool. I like how you can ‘scrub’ the slider and see the transformation.

I got the clock to behave more realistically. It worked better by increasing the strength of the gravity force. The hour hand marks are more symmetrical because it is stiffer. The minute hand flips over the top somewhere between the 5 and 10 minute mark.

I could imagine this clock as a nice feature in a science museum, with people gathering to watch as it tipped over for hours/minutes/seconds. I wonder is there any way the hour/minute numbers could be aligned though? not matching up at 0/12, 3/15, 9/45 is a bit confusing.

In a way, I think the fact they don’t align is part of the nature of the clock, but I’ll play with it more. The hour hand would need to be more flexible than the minute hand so it would droop at an equal rate given its shorter length.

Here’s where I got with this.

Love this clock!
Is it an actual clock or a projection?
If it’s real, how did you match the kangaroo sim to actual bendy hour/minute hands?

It’s not a real clock…yet. These are just renderings.

I need new glasses!
Do you have any external video links? The videos on here don’t play very well on my antique laptop!
What material do you plan on using for the hands? Some kind of glass fibre rod?