When viewing the model, in the Layers panel, click the

icon for model visibility. This does not affect the visibility in any Layout/Details views.

Here is an example:

Cabinet Faces layer is OFF in Model views. 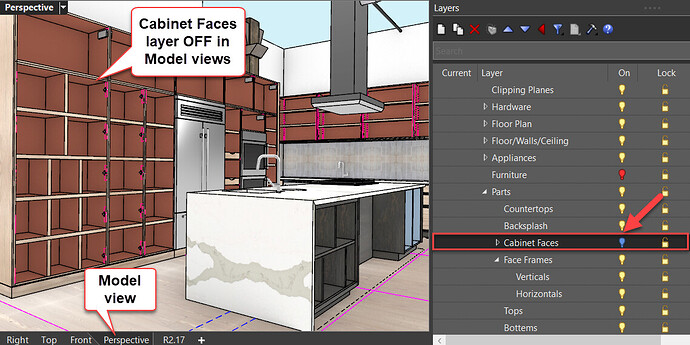 Cabinet Faces layer is ON in this Detail view. 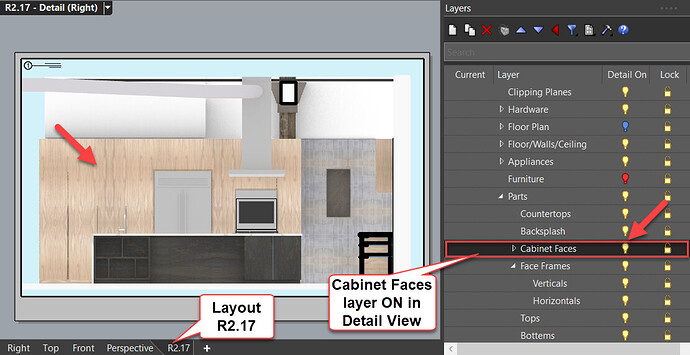 It is still possible to turn layers OFF in both Model and Layout/Detail views at the same time. This is called the global visibility.

To control the visibility of a layer globally, right-click on a light bulb and pick “Layer Off Everywhere.” 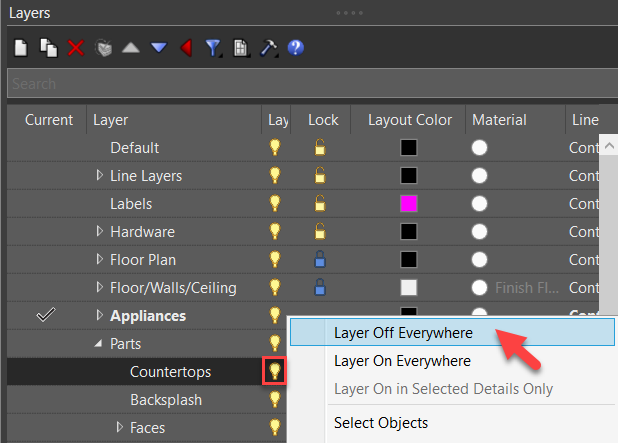 The light bulb will change to a new color - red. 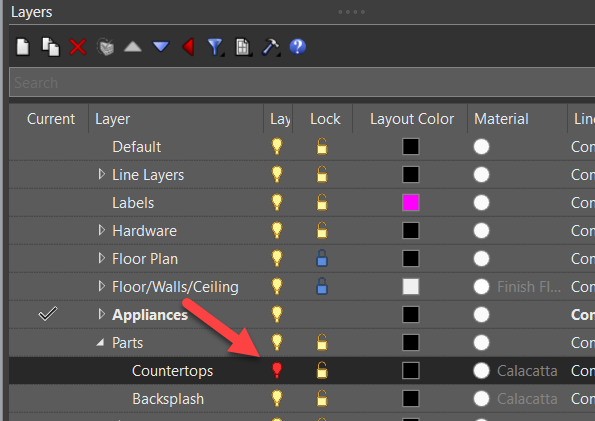 What happens if you click the red global off icon? The behavior will depend on where you are. If you click on a red “globally off” light bulb, the layer will be turned ON in the view you are working in and nowhere else. This is helpful because it will not affect any views you cannot see.

Give it a try and let us know if it works for you.

Just tried it and look working as expected.
I was waiting to have this natively in Rhino from long time!
Using SafeLayout on v7 to have this
Thank you!!

I think that this an amazing feature. A workaround that I’ve been using instead was putting sheets in separate files and outputs of make2d command (to get vector in PDF prints) in separate files and linking them on the sheets. This has an advantage on larger projects with many drawings/sheets, but when keeping everything in one rhino file this feature is a real game changer.

Currently, it doesn’t work for me. Turning layers off/on in the model space affects the layout as well, but turning on/off from layout & detail does not affect the model space

H @petumat,
Thanks for letting us know.

But we will see it and we will get it fixed.
We will let you know when it is ready to try out again.

I’m a little worried that this new implementation could be a bit more complicated than necessary.

Anyway, looking forward to this feature very much, so thanks for finally taking care of this! I use the plugin ‘SafeLayout’ too in R7, but there are quirks and bugs all over the place.

Trying to make sense of these menu entries - how can a layer be on ‘in this detail only’ and at the same time in ‘all layouts’?

Btw., there’s a bug with layer panel settings: column positions/widths are not remembered.
Repro: go to a layout, change the columns, go to model space, then back to layout space. Columns are reset.

Hi @Eugen,
Thanks for testing the WIP.
We made this quick and rough video to explain these settings before the holiday weekend. I will do a better video in a few weeks.

Here is a summary of the settings:

We logged this issue: RH-72219 “Layer on In this Detail” Works When Parent is OFF.
Hopefully that will be working soon.

Btw., there’s a bug with layer panel settings: column positions/widths are not remembered.
Repro: go to a layout, change the columns, go to model space, then back to layout space. Columns are reset.

I can not duplicate this on Windows. Check the next release and see if it is fixed for you. Otherwise, please send a screen capture videos showin showing how you get to the issue.

Complicated can equal powerful. This is a significant change. So it will take some time to get used to and work out all the special cases that were not anticipated. And “test drive” to see how it works for your modeling process.

The latest WIP (8.0.22361.13135, 2022-12-27), for the first time, acutally worked as advertised.
So, sincere thanks for going in and fixing this long standing issue! It was one big puzzle piece why many people avoided Rhino for any serious layout work.

Just for clarification:
In the video you posted, in layout/detail space, there’s just one column of bulbs visible: 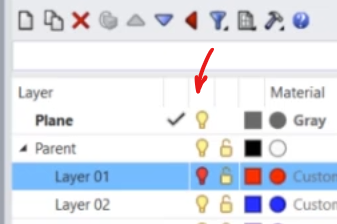 I assume this is the “Layout/Detail on” column. What’s strange is, where did the model space “On” column vanish to?
For those unaware: layout/detail have those 2 columns of bulbs, and the one you are using is usually kind of hidden to the far right in the panel.
Is it possible that the model space column has been removed in layout/detail space in your latest build (not publicly available yet)? That would make sense, since it’s independent of layout/detail anyway, and only leads to confusion which column to use.

Anyway, let’s continue 2023 (which half the globe is in already).
Happy new year!

For those unaware: layout/detail have those 2 columns of bulbs, and the one you are using is usually kind of hidden to the far right in the panel.

In the latest internal this is changed and now indeed there is a single light bulb column only based on the mode you are in.

When in a layout or detail, if you want to see more layer property columns, just click the View button on the toolbar. 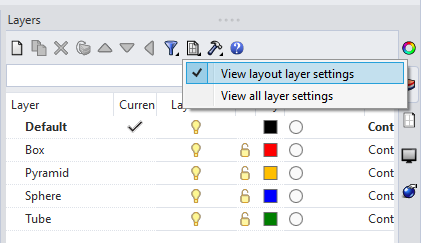 The default is to just show what is relevant to the space you are working in.

Hello! Of course, I forgot this filter is there…
Actually, since the model bulb column does not have any influence now on the layer visibility in layout/detail, maybe it’s best to remove it (and the filter icon

) completely? Or at least make it hidden by default?

Here’s a veeeery importand wish: detail/layout layer settings of files attached as worksessions should be remembered in the .rws file! I just tested this, and they’re not.
Thank you!

Actually, since the model bulb column does not have any influence now on the layer visibility in layout/detail, maybe it’s best to remove it (and the filter icon

) completely? Or at least make it hidden by default?

I can log the request for consideration, but the current mindset is to let the user decide.
First, do not show any Model layer settings:

image827×232 49 KB
Second, a la carte, pick and choose what you want to see.
These are persistent between sessions, so the next time you open Rhino, your selected settings will be restored. 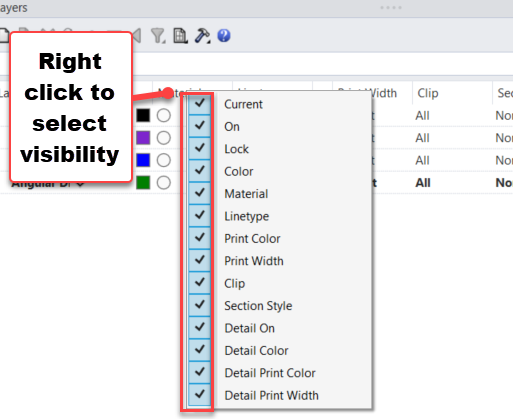 You probably already use this features, but it might be helpful to others.

the current mindset is to let the user decide

But please consider the issue with worksessions and layer visibility! When working on bigger architectural scenes and/or in a team, it’s common practice and a necessity to split up the scene in parts like building design options / urban model / all kinds of 2D plans etc… Since Rhino does not yet support a “true” collaborative workflow (one central file, many users, like in Revit or ArchiCAD), at least worksessions should be supported as logically and consistently as possible. Creating layouts with worksessions is needed. When I open an .rws file, I’d expect the layouts/details to look exactly like I saved them.
Thank you!

Having watched the video on this, I find the new workflow rather confusing and convoluted. I really dislike that you have to right click and use submenu items to change the visibility globally.

In principle, detail views could get the global on/off and local changes treatment. That would be fine by me, but now I feel like I would need to do more work (click more) to get visibility sorted out.

There is a reason why Blenser has 3 (!) visibility icons, one for on/ off globally (when turned off, a layer isn’t even computed) , a second for viewports and a third for renders. I would much rather have 3 of these lightbulb like buttons available to use (I could always hide the layouts one when I don’t need it for a while) as opposed to cramming everything into a single lightbulb and having to use rmb as a result. But, instead of showing 3 lightbulbs, make it an eye (global) , a monitor (for viewport) and a lightbulb or so (for layout).

I personally very much prefer the old way of doing things where you have a button for model space and one for layouts. Though, I certainly do get the wish to contdol detail views individually, which is nice.
Alternatively, I can imagine you want to tie layout and viewport visibility together, in which case you would select the layers you want to behave the same on model space and layouts, click a paperclip (like button at the top of the layer panel button row) and you’d see a paperclip icon appear over both model and layout icons. The “paperclip mode” could even be the default for all I care, but at least you can easily tell from the layers panel whether you have layer set to not show in prints, in the viewport or just for the active detail. Basically, the layout visibility should show layout visibility globally when there is no active detail view. It should show the detail view state when one is currently active and there should be a dedicated viewport button. You should be able to tie viewport and layout changes globally (reflected in both layout and viewport buttons) and any overrides in details should show as a red icon when disabled in detail, but not for layouts. Or green when enabled locally for a detail, but disabled globally for layouts

E: for accessibility and colour blind people, maybe use a red cross or green checkmark overlaid on the layout visibility icon. Would make it clrear what it stands for too.

That would be much more insightful and straightforward to me too. It would also just expand upon how everyone is used to work and streamline the workflow, as opposed to obfuscating it for everyone.

Worth thinking it through. Will do that later.
Anyway, here’s a suggestion I made 3 times already (and sadly never got a reaponse):

Just add a second bulb column to the model space, which works as the local visibility override in model space only! Like what layout/detail already have. In other words, all spaces (model, layout, detail) have 2 columns then.

The left column will always be the master switch. When turned off, layers are off everywhere, period (Like what the red bulb does now). When turned on, the second column will be considered as the local override (logical AND).

The whole point of this thread is: model space layer changes must not mess up layout/detail space, right? This would be the case when in model space only the LOCAL (new) bulb is used per default during editing, and the master bulb only after careful consideration.

The commands that change layer visibilty would need to be changed in a manner that they work both globally/locally. They already do in layout/detail (OneLayerOffInDetail, all these…)

Does this make sense?

I agree with Intuos: let’s not pack too many functions/variants into one bulb.

I haven’t tried out this functionality yet but I also don’t remember having the need for this. Perhaps I might love it in the future but for now I can only think this will make it cumbersome to right click on the bulb every time I want to turn it off globally. I also vote for solving it in a different one-click way.

Edit: Thinking more about it, for me it also makes more sense to right-click to another menu to turn off the layer for one perticular view instead of changing the behaviour everybody is used to.

A post was split to a new topic: Layout lineweight confusion