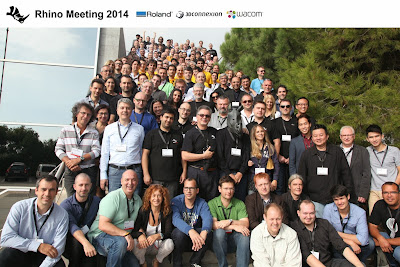 On October 29-30-31 some of the main actors on the Rhino development, distribution and training scenes gathered together in Castelldefels, Barcelona (Spain) to learn and share their last experiences with Rhino.

The event, sponsored by 3Dconnexion, Roland and Wacom, consisted of a series of conferences and networking sessions that brought inspiration and knowledge to an audience of over 200 partipants coming from 35 different countries. Some of the topics covered during the conferences included the last developments at McNeel (RhinoforMac, Grasshopper, food4Rhino, Kangaroo,** **Developer Tools, Training and Support, RhinoFabStudio), as well as sessions that were an open discussion to comment on the latest technologies in the fields of Design, AEC (Architecture,EngineeringandConstruction), and Digital Fabrication.

The Keynote Speakers at the event were kind enough to share some outstanding projects done in Rhino that challenged the software limits thanks to the authors’ creativity. These were:

Everyone was excited to learn more about the size and diversity of the Rhino community – trading many stories about users, projects, and applications from around the world.