In latest release of Rhino 6, 6.31.20315.17001 the function Rhino.Geometry.NurbsSurface.VariableOffset has been deleted with no apparent replacement. Who should I contact about the lost functionality?

There is a Surface.VariableOffset method, with Surface being the base class of NurbsSurface. Is this what you are looking for?

First, I am a long time fan of yours and have used your advice to others many times.

This particular problem is confounding because it showed up once yesterday then fixed itself overnight. It can only be user error.

My Rhino Python routine is at least 2 years old and I have used it hundreds of times. Yesterday the Rhino.Common. NurbsSurface.VariableOffset function failed, the actual cause of failure was the tolerance… This morning I increased the tolerance by a factor of 10 and the routine ran as expected.

This morning, about 4 am, I decided to use a the surface offset function and was looking up the command in the Python Editor and struggled awhile then found a surface variableoffset command… strange, could not locate that function yesterday, so, I went back to the NurbsSuface functions and found the VariableOffset function! Where did it go and how did it get back?

I had looked on the Rhino 7, 6 and 5 python webpages yesterday and could only find the NurbsSuface.VariableOffset command in Rhino 6 documentation.

Do not know what actually happened… I gave up alcohol in August (maybe not a good idea so close to Christmas). Regardless, I will now carry on, using my old routines and I will chalk up the wasted time to COVID 19. The Rona Virus gets blamed for everything else.

I gave up alcohol in August

Do not know what actually happened 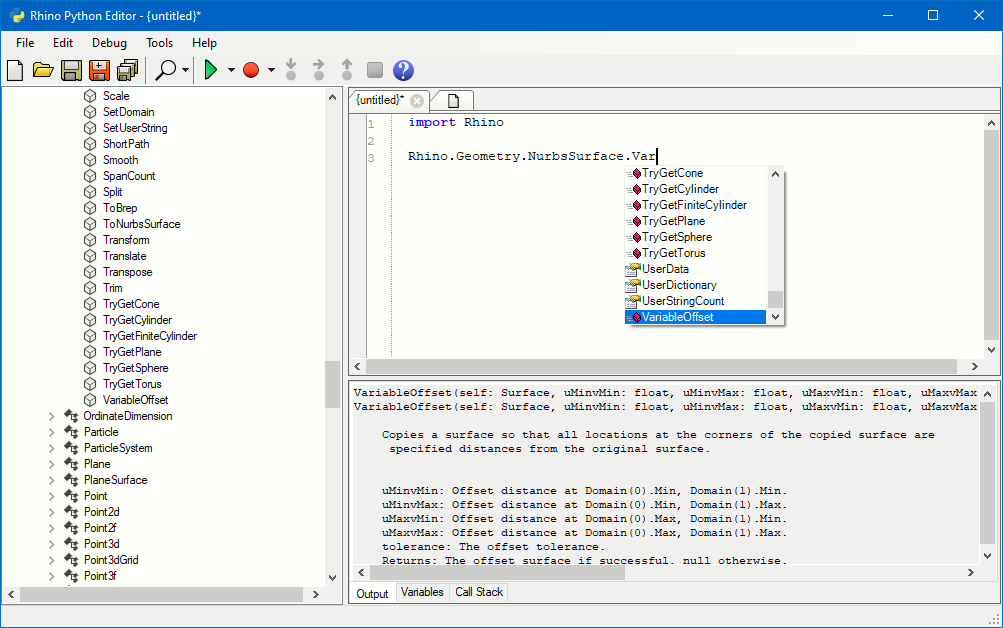 Sometimes the editor’s “intelliclunk” works well, sometimes it does not. I do know the editor is in need of an update - hopefully sooner than later.