I hope you will indicate empty layers.

I suppose that is on the list as two different alternatives:

How would you indicate an empty layer?
-wim

Maybe both? In Blender, a collapsed layer shows the contents with an object count and icons for the data types. So you can see a curve icon and a number, a mesh icon and a number and, in Rhino, perhaps a surface/ brep icon and a number?
This disappears as soon as you expand a layer. This also helps to visualise that you work on a specific layer. You see that you may have accidentally offset a curve on the original layer instead of the current layer, for instance.

One more thing would be nice for the new Layer panel: ‘local’ keyboard shortcuts.

When you roll over the panel with the mouse, CTRL-A should not invoke the ‘SelAll’ command, but the ‘Select All’ feature under the hammer icon in the panel’s toolbar. Same for ‘SelNone’.

In fact every panel should have some local keyshorts, which should be definable under Options > Keyboard. Obviously some under-the-hood-changes would be necessary for this.

Such a feature is supported by numerous other 3d programs (Blender, Softimage XSI, 3ds Max, …)

That allows you to do F2 for rename a layer, whereas it is used to toggle solid shading in the viewport, just to name one.

I have the same question

Lots of icon pack out there free/paid for commercial use

I’m sure we’ll make a few passes over the UI during a review cycle. Keep in mind that, at 100% scaling, the icons are only 16px.

That allows you to do F2 for rename a layer

There is lots left to do, including wiring up the keyboard shortcuts. Keep in mind this is “work-in-progress.”

Understood.
May I ask something? Is it planned to rework each and every Rhino panel over time (make it ETO-based), just like the layer panel?
If so, would all of this go into R8?
Thanks!

Hi Dale, I’m a bit worried about the width of the panel. Even if you will allow columns to be hidden I suspect this still means a lot of scaling and adding/removing columns. I never really liked Rhinos layer manager with regards to visibility of the items and find myself constantly adjusting the column widths and width of the overall panel. This design will not change that.

I wonder if the extra clipping plane columns are really needed. But at least I would vote for less text in the columns. The light bulb icon works well. I can imagine something can be done for the clipping planes too.

But far and foremost I hope you find a solution to keep the overall width of the panel as small as possible, preferably smaller than is needed right now while keeping things visible.

As for the layout layer manager: I think how it is done on the Mac is slightly better currently with regards to UX. But even on the Mac side a mistake is easily made. The difference between detail and model layer states should be made more clear to the user.

+1
I think that the default should be minimalist.
| Layer | Cur | On | Lo | Col | and the others all the others [in my view] could be add by users that needs them, not included as default.
I can’t think of even one occasion where I have used one of these additional columns. I’m sure they are needed in some disciplines, Please Mcneel Devs, let users add what they need, up from a minimalist default.

I’m a bit worried about the width of the panel.

Yeah, me too. The good news is that panels can be docked on the bottom in Rhino 8. Of couse, they can be floated too.

Also, unused columns can be turned off. I’ve yet to hook this up in the WIP, btw.

Finally, you can choose what set of columns to show when viewing layers/details. Just click the Columns button menu.

But a good conversation to have…

I think so. And yes, any new work will go in the WIP.

A gradual UI rework, the future is looking bright for Rhino.
What would also really help with panels if they could be resized to an icon like in Photoshop. I generally don’t refer to Adobe software, but the one thing they did nail is a flexible panel UI with docking and nesting to create tabs (including on floating panels).

Yeah no offence but David’s UI/UX isn’t much better in my opinion. Want to know what looks good? Check out Gemvision’s MatrixGold. 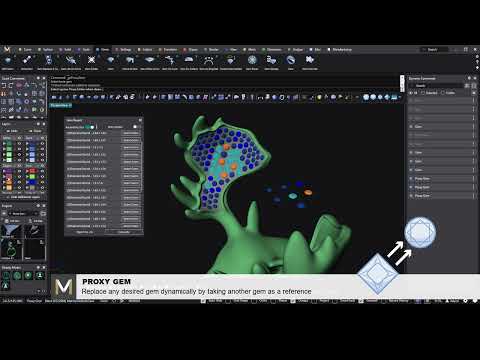 no offence but David’s UI/UX isn’t much better in my opinion. Want to know what looks good?

hi Garris, UI/UX discussions always turn into endless debates. That being said, what looks good is not the same as being better. I often see nice looking user interfaces, but that doesn’t make them good. I clearly remember when SolidWorks made a switch to a more ‘modern’ look. Basically they removed all existing color and changed all icons to blue ones. It looked good but it was awful to work with and after many complaints they offered the option to turn it back to how it was.
As for Grasshopper 2 UI. I think the new icons are very well thought out. They are clear and have plenty of distinct features that make them recognizable among their peers. One (imo) bad example of UI is the current SubD toolbar. It looks quite nice but every time I use it, I find myself searching for the right tool. The icons are visually too similar.
The same goes for the current icons on the Mac in the panels. They look good being all monochromatic, but it is horrible to distinguish them. On the other hand on the Windows side its the exact opposite: they look horrible but are easy to distinguish…

The same goes for the current icons on the Mac in the panels. They look good being all monochromatic, but it is horrible to distinguish them

Exactly! It was a baad mistake making them monochromatic

Would eve nice to be able to drag to reorganise the layer panel icons. 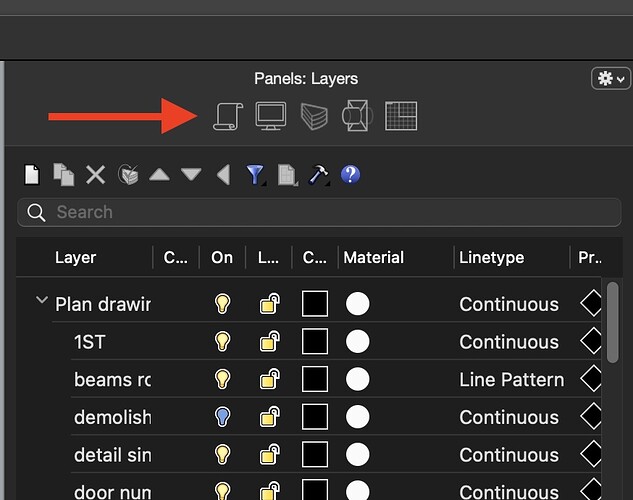 The search box needs a close and back button

Would eve nice to be able to drag to reorganise the layer panel icons.

I’m not sure if that image is from Rhino 8 on Mac? This currently looks different when running with the new UI setup and those panel icons can be reordered. 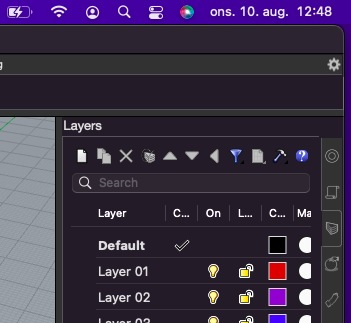 If all goes well, that feature will be turned on in next week’s public WIP.
-wim

The search box needs a close and back button

Thanks. The close button is available on the macOS version and I’ve added an issue report to also have that available on Windows. A back button is a new feature request.
RH-69755 Layer: Implement Cancel on Windows
RH-69756 Layer: Browse back to previous filter
-wim