It was introduced in Rhino 6 as solid white hatch.

Yes, you are right! I’ ve seen this already in some post but it’s actually in Rhino help here.
I consider it anyway more like a workaround than a real command.
Not so straightforward if there are many details in your layout.
Thanks anyway for the hint!

It is a workaround and is not a true implementation of non-rectangular details.

I wonder can the Rhino 8 be just Rhino 7 with NO NEW features, but almost bug free with refined and optimized commands? This grow and expand mantra is getting contra productive in many ways.

That would be a hard sell from marketing stanpoint but I would happily pay double the upgrade price for that.

You may be tired of this kind of comment but I would be happy with V5 (and plugins) + how V7 uses GPU.
If I have to be specific

There are some other tools to mention, I could make a quick video if needed.

I would remove some tools from rhino that had no development for decades and give a low quality result like surface from network, and patch and integrate XNurbs.
I promised myself to stop buying plugins that replace important tools, and may cause problems in the future.

Excellent points by @laborda here. I agree with all of it, the most puzzling of all for me is the solid editing of simple prismatic stuff.

Some Direct polysurface editing (like synchronous technology, fusion, creo, spaceclaim…) What we have works for simple architecture, but it brakes with just a single hole in a cylinder wall.

SolidEditing is a part of Rhino continues to be completely broken. Even for the simplest of things like planar surfaces and extrusion-type surfaces. Even VC barely-funded and silly iPad modeling-playground apps have solved this.

1.I just tested this problem:

Hi all, I bumped into another one. And on simple geometry, please check file. Moving the vertical edge that I marked with a line will destroy 2 surfaces of the polysurface. Same thing if i use solidpton or i just grab the edge with ctrl+shift+click and move it. [image] [image] EDGE MOVE BUG.3dm (76.9 KB)

Who would like to see SpaceClaim forum here given its been nuked at Ansys? Rhino for Windows

similar story here. I stopped paying subscription in 2015. I still find it useful to: import parasolids make direct edits to extend volumes/move faces in simple geometry (something that Rhino is not very good at, especially if surfaces are tapered or have curvature, even degree-2 and extrusion-like transforms) remove fillets and holes that extend across edges of patch boundaries here’s an example of #2 (@rajaa @brian, you might want to take a look at this) where I think a solidpts edit should…

The worse part of this? Rhino doesn’t even have a designed and programmed feedback mechanism routine that at least says: “Sorry I just turned some of your degree-1 and degree-2 surfaces into higher degree and much higher density surfaces. Also your planar surfaces are not longer planar”

Dear McNeel developers, thank you for creating that great piece of software that Rhino is!
My wish: may it prosper and grow and become capable of doing more and more of the work the other apps in our architectural office are still used for (AutoCAD for oldschool 2D plan-drawing - ugh!, Revit when new projects enter the actual construction phase, Adobe stuff for layouting/graphics (I’d prefer Affinity)).
Rhino sits somewhat in the middle and is used for design studies, competitions, rendering, and juggling CAD data of all sorts. Together with VisualArq it can do a little / a lot of pretty much everything - but that overlap could become bigger. It’s not perfect, but still it’s a joy to work with it (much more than with what Autode$k feeds us).
However, here’s my greedy wishlist for R8/9/10… (bigger things first):

It would be very useful, if Rhino could get an Object Manager (Outliner) like it was developed as an experimental plugin for Rhino4 some years ago.

I often work with large Rhino files with thousands of objects on many layers. It’s very hard to look for an object that is hidden, when you don’t know on which layer (some are turned “off”, some are turned “on”) it is placed. Seeing which objects are members of a group or block is another missing feature that an object manager could enable.
This object manager could also be very handy to organize the file structure by dragging and dropping parts or groups from one layer to another.

That is the most important feature that needs added for me.

Here I must concur. I would gladly pay double the price if the software was fast, responsible, bug-free and optimized. Ultimately, the time spent on hardly responsive files, layouts, bugs and finding workaround is most likely costing even more… But I will try to remain an optimist.

I’ve switched from using Sketchup to Rhino fulltime and these have been the things I’ve been missing the most.

+1 to that. Total nightmare at the moment still I find.

I think Rhino 8 should make a clear statement on what it actually is! My impression is that it slightly lost focus. It seems to me that it the strategy has been to (directly and indirectly) open it up for new markets (Apple support, Rhino Inside, Open Nurbs and Rhino Compute)

While this was actually a smart move to bring Rhino computational strengths on the market, it is also a high risk to get lost in complexity. If you just think on what Arm support and depreciated OpenGL (on Mac) will alone cause of an extra effort, chances are high Rhino 8 won’t bring much innovation, due to firefighting all the way.

I guess as an Allrounder, the average is optimum! But at some point it needs to stay competitive when it comes to its initial purpose. Which is surface modelling!

Sub-D was a great improvement and should definitely being improved during the next versions, but McNeel should not forget to improve traditional surface tools.
However, Sub-D, variational surface and all the other magic tools of the last couple of months, are not the holy grail of modelling. I bet the majority of modelling things are still traditional.

In today’s Rhino there are tons of tools in creating surfaces but too few to actually control and evaluate the interaction of surfaces. I think in this forum are dozens of missing feature threads explaining things in detail, but McNeel should just have a look at it’s direct modelling competitors. Alone the topic of blending and matching is huge. Just looking at the legacy VSR Plugin reveals what had been possible. Also the topic of reverse engineering or topology optimisation (smoothing, crowning etc) has room for improvement. Yet another topic is cp reduction. One of the major issues of Rhino is its generous creation of control vertices for many common operations. This will always cause endless effort in refitting all the time. A lightweight topology almost always guarantees all the automation tools to work better, so there is somehow a win-win…

To say it in the words of a disgruntled Mancunian (though probably not a cad user):
So for once in my life
Let me get what I want
Lord knows, it would be the first time

be happy for that… its what keeps us from getting sued for violating patents and copyrights.

alias had them for decades , their patent has expired, GH has a version of them, and blender has them.

they are awesome, and I want them.

Could elaborate a bit what marking menus do? 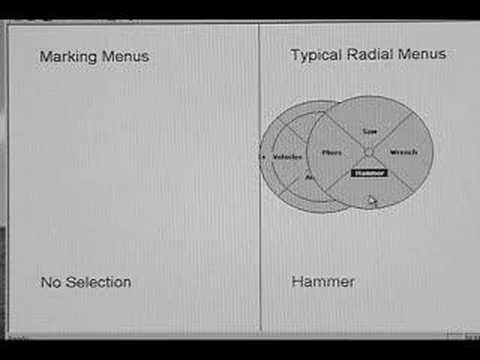 Oh, I loved marking menus! Those were super-fast.