Rhino 7 WIP not distinguished from Rhino 6 on Windows taskbar

Thanks.
Do you think that installing Rhino 6 in a different directory as you suggested is useful nevertheless?

If your v6 is installed under and WIP or BETA then yes. It will keep the next WIP (and eventually BETA) cycle separated from your v6.

FWIW, I’m not seeing the problem here on Win7:

Ok, I will try and report back if that did anything for my initial problem as well.

You can disable combining of icons on the taskbar for now. That will keep them separate on your taskbar.

How would I do that? (maybe a dumb question, but here you go)

Right-click on the taskbar, choose Taskbar Properties..., scroll down in the settings page you are then presented until you see Combine taskbar buttons. Set to Never if you always want to get the separate icons for running apps, or When taskbar is full when you can bear that. 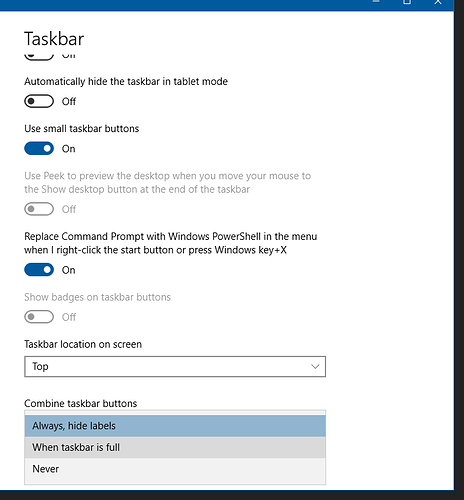 While that creates seperate taskbar buttons, the confusion between v6 and v7 WIP remains:
Right clicking the button leads to the same program (the one attached to the taskbar, attaching both is not possible).

Right clicking the button leads to the same program (the one attached to the taskbar, attaching both is not possible).

I am not sure I understand what attaching means here. Is it about attaching to get icons as I showed in my original reply? Or what kind of attaching do you mean?

As in attaching a button for a program to the windows taskbar.
I think windows uses the term “pin” a program to the taskbar
(sorry for the confusion, I was re-translating from my German windows 10)

Funny thing: after repeatedly pinning and unpinning v6 and v7, I now managed to pin both programs to two separate buttons on the taskbar and everything seems to work now as it should. I have no idea what solved the issue…

Ok, the icons I showed in my original reply were also pinned. I would hazard a guess that is a problem on Windows’ side, not on Rhino.

The problem was that after pinning let’s say Rhino 6, opening an instance of v7 WIP would be shown under the v6 icon and for v7 only the “unpin” option was available.
I honestly don’t know what changed this behavior, but as you say, probably a glitch on the windows side…

Thank you for taking the time,
Norbert

3 posts were split to a new topic: V6 and V7 Beta both opening?

I guess because Rhino 7 is out?

WTF, I can actually BUY Rhino7 now online. Full and upgrade. So I assume tomorrows update will be beta no more but SR0 instead? 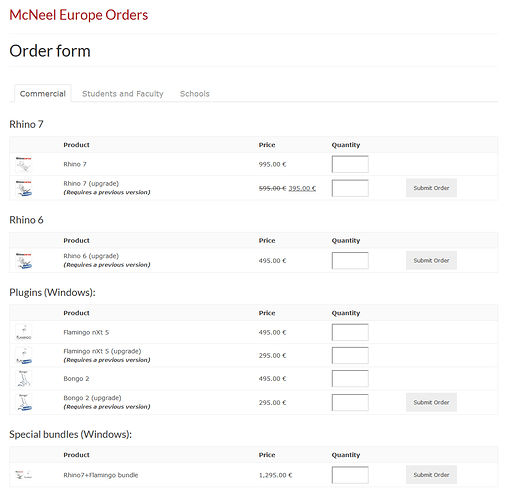 Anybody from McNeel would like to clarify about the state of version 7?
Any statement would be highly appreciated.

Yes, license keys are available for sale (theoretically) as of this morning - but there will be no public announcement for awhile. Not all resellers will have stock immediately, so please be patient - there is no change in the functionality between the release version and the current Beta. Also it would be nice to not bother McNeel with e-mails, as I imagine they are pretty busy right now trying to supply their resellers.