That right there is crucial!
+1

Once forms become complex watertight conglomerates, and during the process of getting there, the ability to “toggle” is critical; at least with the way T-Splines works. I don’t know if the Rhino implementation in intended to be fundamentally different?

@dalelear Is the ability to ‘freeze’ (lock) areas of a SubD form in the development pipeline? Apologies in advance if the feature has been covered: A quick scan of the forum and the Rhino SubD doc did not uncover such for me, unless I simply missed? (Lots of unrelated “freeze/lock” hits.)

A ‘freeze’ feature is highly effective in pursuit of complex forms. It’s the inverse of designer’s ability to create exactly what he/she wants: not breaking what is already deemed complete or fixed while continuing to modify adjacent areas. Freeze along with Match (to nurbs) is powerful.

Is the ability to ‘freeze’ (lock) areas of a SubD form in the development pipeline?

The information this feature would need is built into the core SubD object. Currently there is no user interface access to this feature. Ideally it would work the same way on SubD, Brep, Mesh, PointCloud objects.

This request is in our issue tracking system as RH-53277

In RH-53277 you end with - “This is probably not needed for the Minimum Viable SubD release” - an opinion I do not seek to directly dispute. Clearly, it’s a matter of realities, priorities and prudent sequential delivery of useful features.

However, I would like to point out that: unless one is a ‘blob’ designer, most SubD creations do not live in a vacuum. They exist in concert with nurbs. Match (to nurbs) Pull (to nurbs) and Freeze are critical towards the development of typical manufactured parts. In the hands of a skilled operator, SubD can be utilized beyond concept modeling. Been there, done that, though extremely difficult (impossible?) without such tools, IMO.

Rhino SubD will get there eventually I’m sure, and my gut tells me it’s going to be great in the aggregate.

I agree that all the things you’ve mentioned are absolutely critical for a decent SubD modeling product. We use “Minimum Viable SubD” to differentiate between what get’s done 1st and what gets done 2nd.

Understood! As a sage or two once wrote/sung:

Run, run, run for the roses
The quicker it opens, the sooner it closes
Man, oh, man, oh friend of mine
All good things in all good time

A post was split to a new topic: Bevel for SubD

Is there a way to set the weights of vertices? Without that feature, SUBD becomes much less useful. Otherwise it works great!

HUGE problem with weighted vertices… they rarely data transfer correctly unless you convert them to a mesh or bake them somehow. This was a big limitation at tsplines and I’d imagine the same issue remains for us.

That said, the weight command does not work on subd (yet, but may in the future) thanks for bringing up the issue!

Thanks, I added your vote to an internal feature request RH-47061 for future reference.

+1 for weights. is hugely useful to control local shape without adding too many extra CP’s

After using _InsertPoint to adjust the topology of a SubD mesh, im getting this issue where in blocky mode, the surface points dont line up with the actual vertices of the mesh. In smooth mode it all seems fine. Is this a bug or am i missing something here? It makes working with the mesh in blocky mode very difficult… 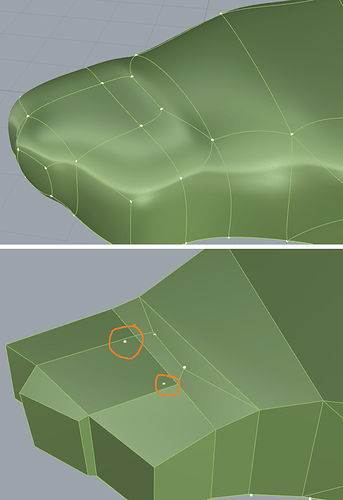 Control Points ans Edit Points are not the same. You’ll find the same thing happening on curves. Read more about it in the help files: