We’ve been using Rhino for hull and structural design of ever-larger ships. One of our current ships is under construction in plate-cutting phase, where the shipyard is using our Rhino model to produce Shipconstructor parts for their production processes. Even now, alterations are coming in from various directions and we have to update the Rhino master ship model to suit. It would be great to have a “Revision History Database” option attached to the model, that can be activated and populated manually by selecting the principal parts that have changed, with a short description and reason (authorisation) for the actual change (with intrinsic date, time, operator and number of parts). As such alterations accumulate over time each change event can highlight changed parts by selecting that change record. It would probably need to retain “ghost” parts that have been deleted, so that the chain of revisions can easily be followed. Some changes would trigger contract variation orders with cost changes. The natural hard-copy output could then be to a .csv file of selected fields.

This feature might possibly be expanded from the ‘Multiple Undo’ database (…?). Currently we use a completely separate “Change Log” spreadsheet, which is not actually connected to the model and lists all ship changes.

A very helpful step in this direction could be to have a ‘COMPARE MODELS’ function, in which an earlier model can be attached as a worksession, and all DIFFERENCES highlighted. These differences could possibly be focused on respective layers that are “ON”, ignoring differences in OFF layers

this is going into some direction of BIM. could maybe be handled with grasshopper or even a simple script with a setobjectdisplaymode for revisioned parts by date. if you want to have it on the same layer. it could be hidden or shown if activated. but the file will be getting also quite large doing so either way since it would have to store any changed or old geometry.

Thank you RichardZ. The last thing I want is any inflated file size, so the key is to keep it lean. At this stage I would be most happy to have a COMPARE method to show differences (added and deleted parts, and layer changes) between two models. We always keep a history of superseded models so earlier models are available to compare … but how can this be done?

Ased1, there is the “notes” in options , maybe along with dot you could just do it in writing right in the file. Must be a huge chore to manage the changes on a ship.
My first question was , how would you imagine it to work for you?
Dont have much more to offer—Mark

Hi Albert -apart from the Notes feature, you can probably cook something useful up with scripting, using document & object user text. Is scripting a possibility for you?

Just remembered this thing that I made a while ago might, possibly be of some use, or a start, anyway - It does an IncrmentalSave or Save but appends a time and date stamp and your comment to Notes in the saved file. Quick and dirty but it might at least help.

you could also display changes in an exploded diagram on an extra layout, having a named camera at the same spot and a make 2d which draws the changed parts into the layout which contains the unchanged data for an overall overview. that means only line drawings from all the changes, which would keep the file lean as you wished. maybe you can combine this with the notes as suggest here in some way or script everything together and make layers per date.

if keeping data lean is an issue for you which is understandable in a complex project, than anything other than 3d geometry may be what you want, could also be just a screen shot or a print of it, or a pdf booklet, ok i am sure you do something in this way anyway.

how many versions can it sum up to? or lets ask different how many changes all together do you get in an average? if its not that astronomically then making ghosted 3D geometry could still be an option.

Thank you Mark. My opening post to this thread explains most of what we need. With Notes we would need to name and add components or groups individually. We already do this with the spreadsheet but it is prone to omissions. We would also have to still retain the spreadsheet for non-Rhino changes - which doubles the work. In the Rhino model we really need a visual highlighting of changed parts. We can’t use layers for this because layers and sub-layers are already fully utilised for material control. We have investigated using part names but these are easy to forget and easily get messed up when copying parts or properties.

The best first step would be to COMPARE a superseded model (via worksession) with a new, modified one, and to then HIGHLIGHT the DIFFERENCES - or just hide everything that is the same. This should be a reasonably simple command and might already exist under a name I just haven’t found yet.

Hi Albert- I don’t know how practical it is in real life, but you can try importing a model on top of another and SelDup Invert and see what lights up.

Thank you Richard. You can get and idea of the revisions by our use of model names like this:
3053-H034-F12-SS21-ST33.3dm
This 120mb file is an 87-metre ship-hull structure file in 33rd revision (ST33), based on hull shape revision 34 (H034), fitout revision12 (F12), and superstructure file group of revision 21 (SS21). Project number is 3053. The name parts all refer to external Rhino files that are work-sessioned in for direct reference.
Early revisions all happen in-house and are kept as superseded reference files for the QA path. As soon as the models are released for construction, all subsequent change history becomes financially and legally critical. This is where we need the revision history record.

Thank you Pascal. Have done that and the parts lit up are all those that have a duplicate. I would need to be able to select the DUPLICATE PAIRS, which would do the job spectacularly well,

Thank you Pascal. That pretty much does the job in the most simple way.
We can put the second screenshot into the project variations record. Excellent solution!! 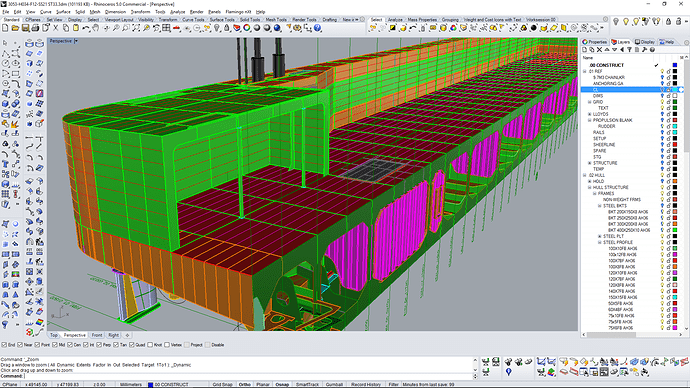 Is SelDupAll associated with an icon or toolbar? I can’t find it in the Select tab

Got it! - Right-click Select Duplicates