Hey everyone! So my office is all mac, and we are trying to set up a standard for rendering out of rhino. 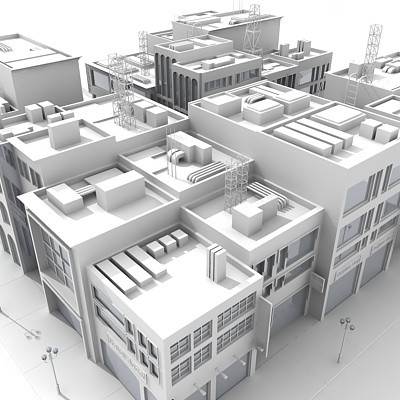 I’ve attached an image of the kind of render quality we are looking to standardize in the office. I was told v-ray is not available for mac. Does anyone have any suggestions on other plug-ins or how to set up the render properties in rhino to get this type of quality and output?

I’ve done ambient occlusion type renders like this for a few projects in Rhino. Under the Rhino Render settings make sure skylight is checked.

I’ve done ambient occlusion type renders like this for a few projects in Rhino.

the clay look is (i think) just due to the monochrome coloring.

For this type of rendering, which could be for illustrative urban design purposes, using Rhino Render with skylight checked (along with customizing other settings) will provide good results.

Also, consider using Rhino’s Make2D command to create line work that you could position over the renderings in a program like Illustrator. Rhino along with other programs can be used to create some visually compelling diagrams. Firms like BIG use similar workflows to create massing diagrams and conceptual design graphics.

Do you have CUDA enabled macs?
If not, I’d also look at investing on PC just for rendering, some really need it.
I just got a cheap PC to run Blender cycles at the moment. Let’s mac free for use as added bonus.
And maybe in future go to windows rhino, since most plugins and all the good stuff for 3D still comes to windows first…

I’ve tried and like, Keyshot, Maxwell, Fluidray, and my favourite and fastest is Thea Renderer:
https://www.thearender.com/site/index.php/downloads.html
Vray if you know what you are doing and practice you’ll get great results, however it is slow and complicated (too much hype as well)

I’ve tried Thea Renderer, but as far as I am aware it isn’t available for rhino for mac.

Kerkythea is available for Mac.

@ERahjes Do you know if there is any way to bring in named views from Rhino into Kerkythea? We usually set up our views in the rhino files and so that is a crucial function for our office. Thanks!

i work on the same problem.
if i have any solutions, i will tell you.