I like to register a custom undo event handler multiple times during a command. Each time I pass the undo instructions as CustomUndoEventArgs. When Invoking Undo by pressing Ctrl-Z, the event handler is called several times as expected, but it receives each time the same argument.

When I run the command and Undo and Redo, the output is the following:

The list of objects the handler sees is correct, but each time it receives the same argument (integer 1). But it should be 1 and 2 as it is passed when registering the custom undo event.

Any idea how to solve this issue?

The targeted use of using multiple undo events is to implement proper undo for UserText and UserDictionary changes, since Rhino does not undo this. My workaround for the moment is postpone all user dictionary writing to the end of the command and put all the undo instruction into one custom undo event.

The purpose of registering a custom undo event handling method with RhinoDoc.AddCustomUndoEvent is so you can undo changes to data managed by your own plug-in.

I’ve attach an example of how RhinoDoc.AddCustomUndoEvent should be used.

Let me know if this helps.

Thank you for your reply and sending me the code. The code works as long as you only register the UndoHandler once per Command. I extended the code with the Command TestEarnTwice. The command first earns 5 then it earns 10. It ends up to 15. Undo should decrease the value by 10 and then by 5 and result in 0. But Rhino does decrease the value two times by 5 and end up with a balance of 5, not 0:

Rhino’s undo mechanism does not provide for multiple undo records per command iteration. If you want your command to provide multiple undos, then you’l need to code this up yourself. For example, Rhino’s Polyline command has it’s on in-command Undo option.

Rhino does not handle changes to user text and the user dictionary attached to the objects.

Can you provide me some code that is not working for you?

In Rhino I do the following:
I draw a line and select it.
Call the command CsWriteUserText
List all User Text entires of this line using GetUserText, this lists the entries as expected.
Call Undo by Ctrl-Z.
List again all User Text entries. The user text should be deleted, but it is still there.

In the command I had to add a Dummy CustomUndoEvent for that does nothing. Without that, Rhino does not recognize that there is something to undo.
If this dummy Undo is not present, Rhino would instead of Undoing the CsWriteUserText command, go further back in history undo the previous command (in the example it would delete the line).

The same behaviour of Rhino with User Text I experience with the handling of UserDictionary.
There is also already a Issue created by you regarding the UserText Undo Topic:
https://mcneel.myjetbrains.com/youtrack/issue/RH-49758

The other topic is Custom Undo:

Rhino’s undo mechanism does not provide for multiple undo records per command iteration. If you want your command to provide multiple undos, then you’l need to code this up yourself. For example, Rhino’s Polyline command has it’s on in-command Undo option.

Implementing the possibility for the user to do Undo within a command as Polyline does it is not what I intend to to. I simply want to implement undo of my own data. A command typically does modifications of data in several locations on several objects (Rhino objects or own data objects). The clean method to implement undo for the own data is registering a custom undo handler each time a modification is done on an own data object. Rhino would then, when the user presses undo, call the undo handler in the right sequence (backwards and typically with Rhino document changes in between). Rhino lets you register multiple undohandler with AddCustomUndoEvent (it does not throw an Exception when you use it multiple times). During Undo Rhino also calls the number of Custom UndoHandlers registered. It does is it even in the right place (between Rhino handles its internal Undo Handlers on Objects). This is what my initial example in my first post shows. The problem is that Rhino always calles the first handler registered even when it should call the second.

The output is the following:

I hope that Rhino improves there. The two ways for proper handling undo of own data should be to my opinion:

This leaves me with the only work around:

Record all changes on own data during a command. Register all undo to these changes at the end of the command. Not so elegant.

Here is the property way to add attribute user text to an object, from a command, and have undo work:

Thank you Dale for posting this solution. This works for me. The solution for my plug-in now is using user dictionaries together with Attributes.Duplicate() and ModifyAttributes(). With this, Rhino correctly handles undo of the user dictionary. And everytime a command of my plug-in runs I read all my data from the user dictionary. So I don’t need anymore to use AddCustomUndoEvent(). Anyway I would appriciate if Rhino improves the behaviour of AddCustomUndoEvent(), it does not behave as expected and makes it hard work to implement undo of own plugin-data.

Handling undo with data attached to object using user dictionaries works well with the method proposed by Dale. However my PlugIn also stores data in user dictionaries attached to Layers. As the UserDictionary is directly a property of the Layer, it is not possible to use Dale’s proposed method replacing the Attributes containing the user dictionary. As a consequence again undo is broken.

Does anybody (may be Dale?) have an idea how to best implement undo for user dictionaries stored with layers?

Does anybody (may be Dale?) have an idea how to best implement undo for user dictionaries stored with layers?

Can you provide sample code that does not work for you?

The example illustrates the concept I am using for my plug-in. Instead of circles, my plug-in draws wires used in electronics products. Wire layouts are organized in layers. The wire diameter and other parameters are defined on layout level. Thats why these parameters are saved in the corresponding layer user dicionary.

Readers who like to have an impression of this plug-in, visit this page: 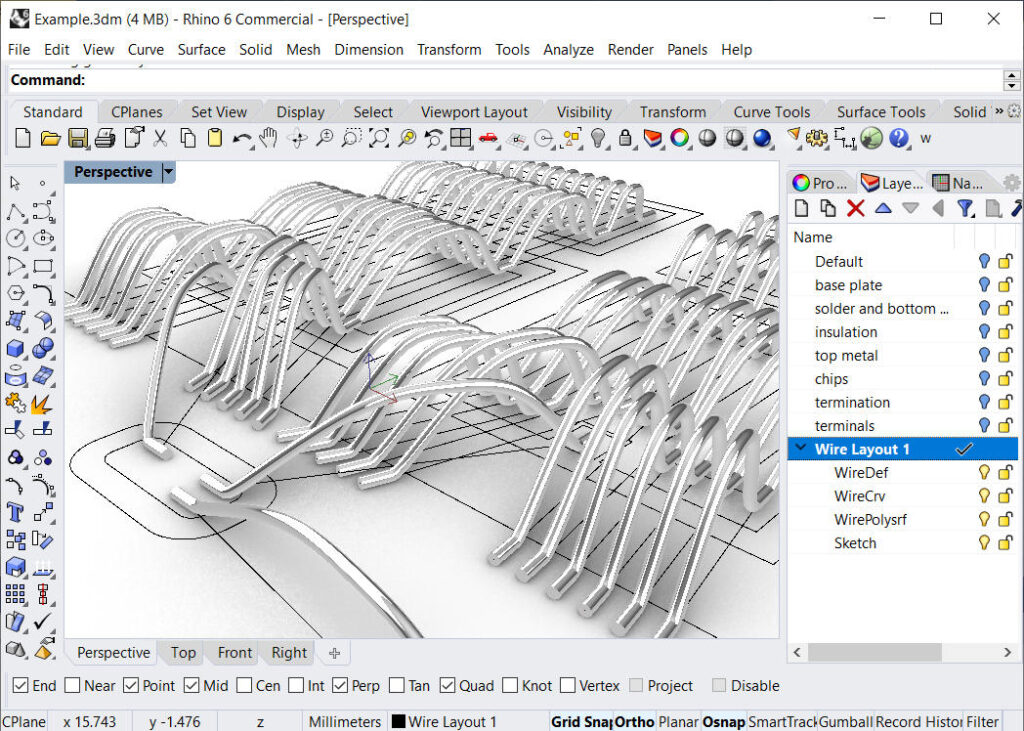 In a nutshell, the layer doesn’t know the user dictionary has been modified, so the layer is never copied and pushed on to Rhino’s undo stack. The “trick” is a easy work-around until we get this issue resolved.

Thank you, Dale.
One line and my plug in behaves as expected!