Reading exported .ai files in vector editors other than Illustrator

I am trying to open a .ai file exported from rhino in an application other than Illustrator ( Affinity Designer by Serif), however I am getting the following error message " Failed to Open PDF file, the file cannot be parsed".
I posted this to Serif’s forum and the response was that the ai file might not contain a PDF stream ( since that is what is read by Affinity Designer). Can this issue be solved? Else is it possible to export a file from rhino as a pdf and maintain the structure of layers as to edit in any other vector editor other than Illustrator?

Have you tried exporting a pdf, by using a pdf programme/‘printer’ ? I use PDF24, which is available free of charge, though they probably welcome donations.

If the serif programme doesn’t import ai, somewhere I red up on the trick of importing the ai file into Scribus, which is an open source programme, then exporting it as an SVG from there, which I have then imported into Inkscape, another open source programme. I am not sure about preserving layers, though. . .

Hey Ben,
The Affinity designer does import ai, if the file is directly created in illustrator and saved as an ai. However, if the ai file is exported from rhino it doesn’t open it.
You can directly print to a pdf on a mac ( vector output), however you loose the layers ( and becomes very tedious to edit).

One thing noticed is that when you open the rhino exported ai file in illustrator, you get a [ converted] beside the name of the file, and when saving, it does a ‘save as’ instead. once it is saved through illustrator , you can open it in the Affinity designer normally.
I guess the issue is with the way rhino exports the .ai file.

Do you prefer affinity to ai or are you more familiar with it ?

It is pretty good and very fast compared to Illustrator ( from early trials). It doesn’t require a monthly subscription fee and it costs around 40 pounds . It is not only about the software rather it is a matter of principle.
New Tech companies will proliferate and will be able to create competitive software that rivals the “standard” ones for a fraction of the price. This makes interoperability pretty important .

Have you tried Inkscape ? It is Open source, hence free, like Ben said.

I use Illustrator, because I have been since version 2 or 3 and i am used to working in both Illustrator & Rhino, to do 2D lines for concepts. I also use Adobe Line & Draw on the iPad which makes it even better to work out ideas while on the road and know I can access it from home or office. Not sure if these are free.

The converted added is because Rhino exports to an older version of Illustrator, not sure which one.

It is not only about the software rather it is a matter of principle.

So maybe you should be modelling with Blender, it’s free and OpenSource

It sounds like it is the way Affinity Designer is importing the AI files. I have never had issues with layers in Illustrator from Rhino.

All the best if finding a solution.

the same is for Preview and inkscape and numeroous other applications

there is simply no other way than to resave it in illustrator,
c4d opens it but that only works in matters of 3d construction
if you need to make it up graphically you are stuck.

but they all give up on this ai created by rhino. i also tried an online converter…
it spat out the listing of the commands implemented in the header of the file
or so i guess. but the pdf was not usable…

i guess its not affinity or preview, its how rhino saves it that only adobe illu can open it.
really not usefull for people who dont own or rent Adobe stuff!

The AI that Rhino writes is the old Illustrator 8.0, EPS based format. The newer AI format is PDF based.

The AI that Rhino writes is the old Illustrator 8.0, EPS based format. The newer AI format is PDF based.

I think we should insist that the old AI format be brought up to date. I export / import between the 2 regularly.

I already started a WISH here ,

I hope this old .eps / .ai format Rhino uses to export as Adobe Illustrator can be modernized in Rhino 6. I am not sure if this is related to Make2D, but it needs it. As someone who works between Rhino & Illustrator a lot, thanks, From another thread … «Randy

This would maybe be a good idea as well, but update AI format first.

maybe Rhino could get an svg exporter implemented

Maybe the update AI format request should be in Meta ?

not sure which software to use to get an emf? this seems pc only.

Maybe it should be in Meta ?

what about Meta? you mean this thread or there is one in Meta?
i read something recently not sure where.

not sure which software to use to get an emf? this seems pc only.

Hm - I don’t use Rhino on a mac so I don’t know.
Rhino on PC offers EMF export.
If you need another software to translate, it makes no sense.

Rhino on PC offers EMF export.
If you need another software to translate, it makes no sense.

Here is what we get for export options on a Mac. 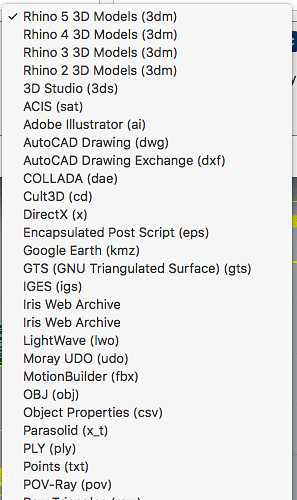 I suppose they assume that Mac users don’t need Enhanced MetaFile format, which is essentially true.

what about Meta? you mean this thread or there is one in Meta?

I rephrased my question, it is about asking for an updated export to AI format.

Hm - I don’t use Rhino on a mac so I don’t know.
Rhino on PC offers EMF export.

emf seems to be a microsoft thing.

If you need another software to translate, it makes no sense.

but this has been discussed for a long time now
it has just not been taken too serious.

I see in rhinorudis list above the EPS format (I don’t seem to have that in Rhino 5 on Windows) is that basically the same as the old AI or does Affinity Designer maybe read it? Did anybody try that on OSX?

I see in rhinorudis list above the EPS format (I don’t seem to have that in Rhino 5 on Windows) is that basically the same as the old AI or does Affinity Designer maybe read it? Did anybody try that on OSX?

that basically the same as the old AI or does Affinity Designer maybe read it?

I believe so, And I am not sure what Affinty Designer reads, since i don’t use it. Work does the Adobe thing for me here & home.

I am not sure what Affinty Designer reads

it reads every pdf and current ai files, its very effective otherwise.

Ah, too bad about the EPS.
I was a bit surprised about the lack of deeper import options in Affinity myself and raised it during their Windows beta phase - funny enough they support Freehand 10 and 11 - but they didn’t plan to support the old AI format, it also seems that newer Adobe SDKs no longer offer that option either so they would have to find some old SDK version that still contains it…

raised it during their Windows beta phase

I was surprised by that when I looked at it a few weeks ago. I thought it was a Mac only. Glad it went cross platform. For the price you can’t beat it. That is why Sketch became so big as an AI alternative in the web graphics world.