and John says it’s no good in 6

The latest version works in the current Rhino 6. They will probably have to update it with each WIP version though until SDK freeze. But yeah, I guess it’s more a proof of concept.

Those renders are “dev art” - I wouldn’t use those to compare ProRender with anything else. AMD isn’t spending a fortune on marketing - so if you want to see what it’s really capable of, try it!

It certainly won’t work in V5, but it should now work with Rhino WIP. A new version of ProRender will be released every Wednesday until the WIP SDK freezes.

Having issues getting this (RadeonProRenderRhinoPlugin_WIP_20160809) update to load. In the program manager when I point to the newer FireRender.rhp say DLL out of date

What exactly are you doing to install it? You shouldn’t have to “point to” the RHP - in fact, you shouldn’t see the RHP at all. All you should have to do is double click on the RHI file.

I toggle on the FireRender.rhp and it opens V5. I load the the Wip version of FireRender as it says 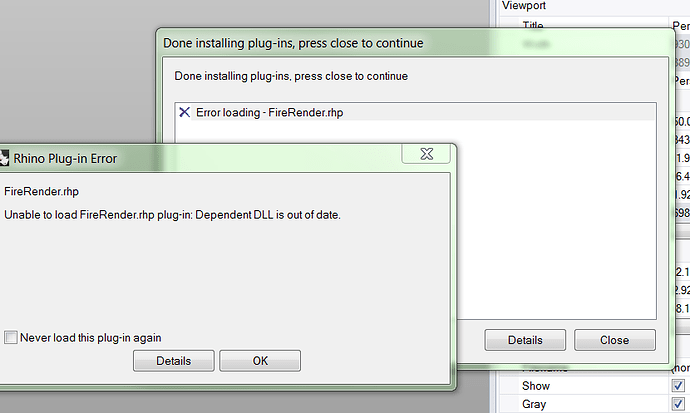 ProRender does not work on Rhino 5.

I’ve installed Rhino 6 WIP for Aug 8, and I get a similar error after I install ProRender: “Dependent DLL is missing”. I would assume that the .rhi installer would unpacked any required DLLs, but I guess not. Any ideas?

Hmm, I did some googling and it seems the issue is with Windows 10 generally, not AMD. The opencl dll itself is not working correctly in windows 10 even if drivers are up to date, etc, and needs to be manually replaced / repaired:

Sorry for the spam -

Here’s a how-to on how to fix this issue manually:

I just started getting this same error on the 08/23 WIP. Haven’t tried that fix yet, ugh.

Well I was also having issues updating my display drivers, so I just used Display Driver Uninstaller to cleanup and reinstall them, and that rectified this.

Sadly, it has NOT worked for me. I tried the fix in the video, and then tried your suggestion of uninstalling and reinstalling display drivers (Radeon R9 Nano) after the video fix didn’t work. No luck. I’ve also tried updating to the latest Windows 10, the latest Rhino WIP (8/23) and the corresponding latest Prorender build. I still get “dependent DLL is out of date.”

A new version of ProRender will be released every Wednesday until the WIP SDK freezes.

Unfortunately it’s not possible this week. I will release a new one on Wednesday.

its any news about pro render for rhino ?