I thought that too but I didn’t want to be too greedy.

I noticed that you can’t change the size of the images in the tabs. Even if I pick the larger resolution nothing happens.

Rhino should be able to compute that image size too based on the tab height.

i am hardly missing the “one shot between” object snap in the Osnap dock bar. What happened to it ?

Hi Clement- there are two levels of one-shots in V6/WIP - one with Shift and one with Ctrl… does that do it?

Ah great. I had “Project” enabled in the Osnap panel and therefore “Between” did not stand out visually as it appears in the same place. It’s really hard to notice when all the other snaps are looking identical when Shift is pressed… 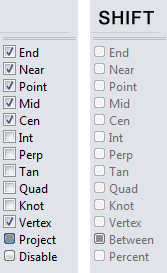 @pascal, i think it should be be flagged as a glitch, since the “Between” snap carries over the checkbox (and state) from the “Project” snap. While Shift is pressed, nothing should be checked and “Between” should get the same checkbox behaviour like all other one-shot snaps.

Hi Clement - thanks, I see that.

Much better. Thank you!

So please fix it.

If you don’t like it, turn it off:
Rhino Options > Mouse > Selecting > Allow selecting objects with points on

Making a UI that nobody will object to is an exercise in futility.