I’m looking at quad remesh to export to blender a bit better. The way mesh works over trimmed surfaces in general just doesn’t work great sometimes. I can simplify quad mesh pretty easily. But it’s quite difficult for…well every piece I’ve tried so far. Holes in geometry, which is definitely difficult to model in quads All the time even directly in blender or other, are difficult to create.
This method of mesh is Great because it doesn’t create an insane number of triangles at every single joined edge on a polysurface. In face, you can have it ignore fillets altogether. Awesome.

I tried it on a few items. One was bent sheet metal. I noticed a few rather large issues. One is the edge detection for sharp edges fails quite frequently. One polygon is sharp, the next isn’t, then it’s sharp, then it isn’t. The piece I tested has a very slight curve in one direction. I made it pretty tight mesh and over a .21 inch area, in one spot there’s just a random bump out about .009inches tall. Very noticeable.

With the subtle curve I noticed another large issue. The curve’s end points are 2.19inches apart and the curve is a 3 point degree 2 curve with the curve height being .149 inches. Meshing with a distance of .05 length does fill the space is .05inch quads, however, the edge of that surface ends up with much worse tessellation. 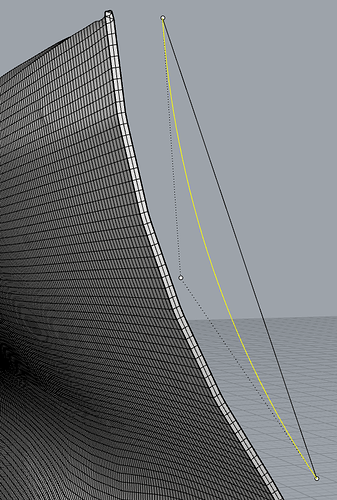 image524×777 123 KB
You can see the little wobble in this image, and you can see that the edge isn’t tessellated correctly. I pulled a curve from the surface off by doing “DupEdge” to show the data it’s being fed.

It looks to me like it’s using a distance to edge calculation somwhere, but not giving us access to it. But it’s cascading over that simplified mesh rather than viewport mesh or nurbs data.
I also have it frequently fail without doing anything. I did this same exact part more than once. The first time I did it, I got results with using Strict edges. This is a good candidate for it since the only edges are actually the edge of the bends. It’s nice to get a good set of polys there. It’s failing terribly at the top here because there are tiny fillets there (engineering data, and not sure if Rhino is as good at defeaturing as something like fusion yet).
It would be nice to have an idea of why some parts just stop after thinking a few seconds and just report zero face count. Memory issues? Mesh no good? No idea.

Here’s a better image showing that it’s not doing a great job of utilizing the quads to actually follow the shape. You’ve got all those quads, why are they perfectly flat between those two points poking through?

I LOVE the direction this is going. But it’s definitely not working for what I’m hoping to use it for yet.

Ha. Ok, so the funny thing is, I converted to mesh First, THEN converted to quad mesh and got MUCH better results. So yes, Please give us a workflow that includes explaining to quad remesh, what it’s working off of. I think you’re using some mesh somewhere, but it’s not the viewport mesh. I think it’s the default “convert to mesh” options?

I did some trickery to try and force it to something closer to what I wanted as well, and got Decent results, but it’s a lot of work. I manually duplicated a bunch of the edges that were important and used those as guides. I then got a pretty darn good model. But selecting those edges takes a long time. I wish there were something for nurbs edges where you select an edge, then modifier key select another edge and it automatically selects edges on the way. Of course, I’d also like to be able to select polysurface “edge loops.” Hey, this fillet runs all the way around, why can’t I just select those edges with a a couple clicks rather than having to manually selecting all 48 edges one at a time.

I attempted to do a quicker hack to get all the curves at once. I exploded my polyobject, duplicate border, explode, deselect, select duplicates, delete. Then tried to use all those curves as quides, but it just came up with no results. It doesn’t tell me it failed. It just comes up with nothing.

An interesting separate tool might be something where you select surfaces in order to create the polygon cascade, telling blender, these are the main surfaces and the ones that are important. It could mesh those in that order, then when you are finished with the A surfaces, you can let it do it’s thing on the rest of the mesh. Another interesting method would be to help blender define fillets. If it know fillets, it can know better how to treat the polygons. The quads should touch both sides of the fillet, and should have one division between those, tangent to the fillet neighboring faces right? When you subD that, it should come up with the same degree2 surface shape (or at least really close to it).

I LOVE the direction this is headed, but I definitely need more information and control in order to get it to do what I want and/or troubleshoot why something isn’t going right.

This video may provide you with some tips on how the different options work as well as some work flow ideas. The command is always remeshing mesh inputs. If you’re using a Brep as the input object then the Breps render mesh is used as the input similar to how other commands in Rhino like the mesh boolean commands operate when supplied breps.