I dont’ want to post this in the original topic, which can be found here:

Hi, I’m a bit confused regarding debugging possibilities: The integrated rhino.Python script editor provides a debugger. Is there a way to use an external debugger. I’d like to use PyDev not only as an editor but also make use of the integrated debugger. Is using the .NET SDK or the C++ SDK the only way to get a full featured IDE for writing Rhino scripts/plugins? See you Flo

I set up everything like mentioned in these topics I’ve found:

NOTE: This article is specific to getting Pydev to work on Windows. I’ve had problems getting the ironpython interpreter to work inside Pydev on Mac. Hopefully this will inspire someone to ha…

Remote Debugging Rhino.Python Scripts using Eclipse/PyDev Rhino 5 includes a tiny Python script editor and debugger (_EditPythonScript). In case the features of this mini integrated development environment (IDE) are considered to be insufficient an... 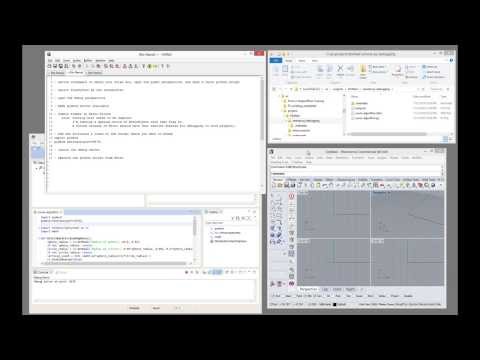 But unfortunately I don’t get the external debugger running. When I start the debug server in eclipse and run the same script in _runpythonscript, eclipse doesn’t get information for debuging and rhino freezes.

I attach all the pictures of my preferences. I tried it with the ipy64.exe as well with the ipy.exe. Always the same problem.

Hi ZweiP,
Remote debugging is something we are working to support in the future but right now even though some have been able to make it work it’s not easy and doesn’t always work. In some cases in addition to checking “Frames Enabled” in the “Script Engine” tab of the Python Options, Tracing also needs to be enabled. Tracing can’t be enabled in the Rhino 5 version of IronPython but will be in Rhino 6.
One thing you can check. Under the Python Options dialog under Module Search Paths I can’t see the whole path in your screen shot. Can you confirm that the directory org.python.pydev_3.9… contains the subdirectory pysrc that contains the file pydevd.py?

Thank you so much for your reply.
First of all the Frames Enabled Checkbos is marked.
And under the Module Search Path the subdirectory pysrc is loaded.

I debugged the script in Rhino without the settrace command. Everything looks fine. The pydevd is imported and there is no ImportError.

I also tried to debug it in eclipse and even there everything looks fine. It even breaks right after the settrace command. I really double checked everything.

What else coud I do to make it work?
Thanks

Hi ZweiP,
If you followed the instructions from the different links you posted above and it doesn’t work then I’m not sure what else you can do. Even though some of us managed to get it to work some of the time it’s not reliable. We’re working on making this better in Rhino 6.

Thanks for your help. I tried so many things (reinstall, different settings …), but I couldn’t get it work. Now I give it up for a while. It would be great if it is possible to make some “normal” Python (numpy, scipy …) not IronPython scripts work on Rhino 6. Then it wouldn’t be necessary for me to have an external IDE.

When is Rhino 6 going to be released?