I’m try to make a script that projects end points of one group of curves to another group of curves.
Each curve of the first group should be projected only to one curve from the second group (the closest one). I’m using Pull Point component for this - so far so good. But in the end I’m getting one list of points.
What I would need is to sort points in several list depending to which curve points were attracted.

Is there a way to do this? Any help would be appreciated! 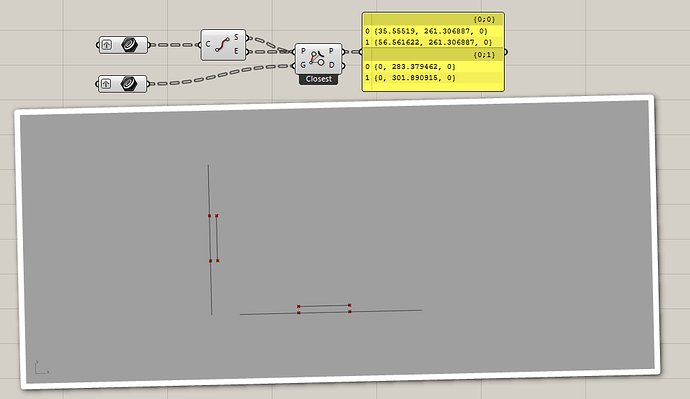 Thanks for an answer Adam!

Your solution works if the specific selection order is used. In my case order could be random…

I found that first 1/2 of the list contains start points of input lines and the other 1/2 the endpoints.
Knowing that I came up with this that seems to work:

Sorry, as long as your Pull Point is set to closest only, you only need to graft one of the inputs.

Also, just as a possible alternate for your workflow, you could use Dispatch.

Yes, both your solutions works. Thanks a lot!

Maybe you could suggest on how to sort lists so that each pair of points in the tree would match the corresponding input curve (curve to which the points were projected)? Now I’m getting lists in both trees in the order they were selected.

Here is one approach. It uses Curve Closest Point instead of Pull Point.