Project tangent to target in 3D?

Not sure how to describe this in other words, but perhaps a picture will help:

I’d like to draw a line from a curve to an endpoint, and that line must be tangent to the curve. Does anyone know how to do this?

Here’s the example file as well:

Hello - there are a few ways - from your description (separate curve), probably the simplest is to make a line, then Match the line back to the curve for tangency, with the other end held at Position. 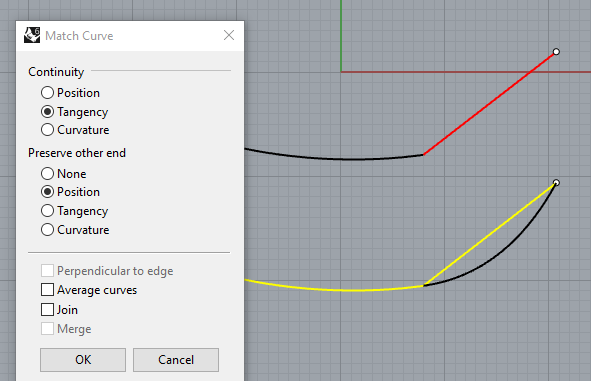 For a single curve use Extend > ToPoint with Type= Arc or Smooth.

Thanks, it sounds as if match will do what I want, but neither my result, or what I see in your picture is what I tried to describe.

The key that I might have missed to explicitly state is that I don’t want to modify either of the existing curves or lines. I want to add a new line and find new points along the curve.

Method B
Make sure the Tan OSnap is on.
Line command
Select the end point (not on the curve)
Move the cursor near the curve and move along the curve until the Tan OSnap appears.
Left click to create the line.

Even easier than I thought it would be (so easy that no wonder @pascal misunderstood me).