Problems with the Macbook M1 Pro

I just bought a macbook M1 Pro 2021 a few months ago.
Since the last Update Rhino got really slow. There are so many Lags. I just tried the File on another Macbook pro(2019). There were no lags. Is there an actual Problem that Rhino isn’t optimize to the new Macbook?
Maybe someone had an idea

Since the last Update Rhino got really slow.

Which update is that?

Hi Olivia - Could you post a file and step-by-step instructions on how to reproduce this behavior? Apart from that, we are seeing several users having serious issues with running Rhino 7 on an M1 Apple. Apparently, the OpenGL implementation on those is substantially different from the one on Intel Macs. We are looking into this but are not yet sure if we’ll be able to work around this. -wim

So it’s not sure if it will run better in the next few months ?

Let’s see - You are now running 7.15?
Could you try running 7.13 again and see if that is better? (Note, on Mac, when running the *.dmg, instead of unpacking into the applications folder, you can drag the application to the desktop. That way, you can quickly test several versions).
-wim

Hi Wim,
is there a manual how i could install an older Version of Rhino ?

Hi Niklas -
Instead of dragging the Rhino icon onto the “Applications” folder, drag it onto the desktop. Then renamed the icon on the desktop to something unique (like the version) so that it doesn’t get overwritten by a different version. 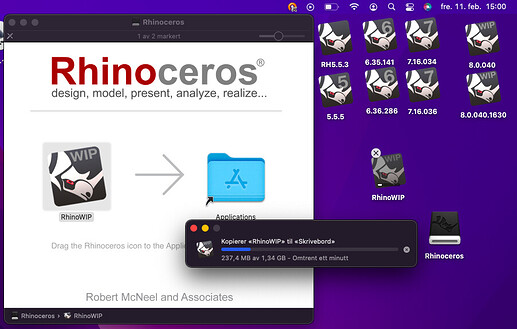