Is there a way to roll back to the previous version until it’s resolved?

Hi - please check the following folder on your PC to see if SR12 is still available there.
If not, I’ll get you a link.

Alright, thank you. Managed to downgrade to the previous version without screwing anything up and the dimensions are now behaving as I wanted.

For me, dimension lines are missing for any dimension less than 6’. Can this threshold be set? (To Zero, Ideally…) I’m assuming not, from Mary’s post above.

Hello - As far as I can see this is related to text size to dimension ‘space’ ratio. Smaller text allows the line to show with a smaller dimension. I do not see any way to set it explicitly.

Well, it seems to make sense in that example, Pascal, but it’s not helpful in the below:

(In my decades of experience in Architecture, this has never been desirable, I echo Simon’s surprise.)

I’ll be rolling back also. Does this sort of uninstall and reinstall require porting over my preferences and options and macros and so on? If so, can you please direct me to the instructions for that procedure. It’s not something I can recall each time. I will need a link to 6.12 though ( I just updated from 10 to 13). 12 isn’t in my cache.

Rhino 6.11 was the last version that didn’t behave like Rhino 5 - link in PM

Does this sort of uninstall and reinstall require porting over my preferences and options and macros and so on?

Any changes to factory-default toolbars will be lost in an uninstall. These should be saved with a new name. Preferences and options survive an uninstall but it’s always a good idea to keep a backup (using the OptionsExport command). How are your macros defined?

Hi Djhg,
Sorry again for the issue. We sided with the Rhino 5 behavior since users that upgraded to v6 were complaining about the line, while orphaning users like you that adopted the newer Rhino 6 (sr0 to sr11) behavior. Obviously, Rhino can not make everyone happy until this control is offered.

Control for the Dimension Line When Arrows Are Placed on Outside in Rhino 7 is on the tracker item RH-50656. I will let you know more when it has implemented, and I hope it will be sooner.

When this is available, you can download and install the WIP of Rhino 7 to have control over the line.

But for now, try and download Rhino 6 sr11 from here.
Let me know if it works for you.
You will probably need to uninstall Rhino if you have sr12 installed.

And if you worried about loosing anything your have customized, reference @wim’s suggestions above.

How are your macros defined?

As per the Rhino video tutorial for creating mx and my for mirroring across those axes. Will they survive an install?

Control for the Dimension Line When Arrows Are Placed on Outside in Rhino 7 is on the tracker item RH-50656 . I will let you know more when it has implemented, and I hope it will be sooner.

This is an important issue. It’s a basic requirement for any dimensioning for it NOT to work only as it has for recent months. No line between hash marks for any dimension less than 6’? How could this possibly be an advantage? No professional in the construction industry, in my long experience, would require that. Until it’s fixed, those of us requiring typical architectural construction technical drawing standards are labouring with an out of date version. Please provide a fix.

The fix is already in Rhino 7 wip. Any user that has Rhino 6, can download and use the Serengetti (work in progress) release of the next version of Rhino.

As I explained earlier in this thread, this was a regression from Rhino 5 and many users were telling us that it was not working for them. These Rhino 5 users were updating to Rhino 6 and were expecting the same behavior as Rhino 5. It took a few releases for this to be addressed, but it was eventually rolled back to work like it did in Rhino 5.

The only sensibly option moving forward was to make Rhino offer the control of the dimension line between the arrow/tick. The user needed the power to decide in the documents, even having one file do the line and another not.

I believe the Rhino 7 SR0 2019-5-28 wip contains the control you are looking for. I just tested the fix on Friday. You can run Rhino 6 and Rhino 7 WIP side-by-side without issue. (if it is not in the public build, it will be there soon.)

You should be able to combine these three setting in the Annotation style under Text and Arrows to get any behavior that you are looking for. 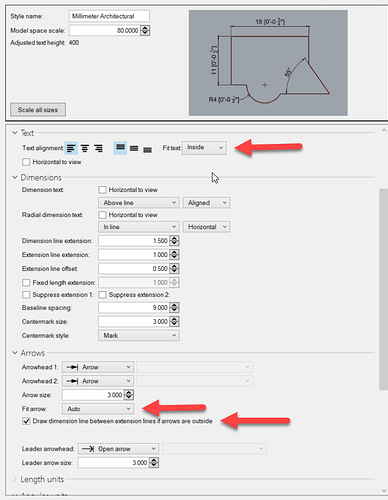 If not, let us know:

These Rhino 5 users were updating to Rhino 6 and were expecting the same behavior as Rhino 5.

Well the problem is when you upgrade to a different main version, you expect some changes. You do not expect such changes (making things worse for a lot of people and screwing up projects you’re working on) in service updates.

Unfortunately the company I’m working for won’t upgrade to Rhino 7 anytime soon (running the free WIP version is only a temporary solution) so I’m either stuck with an outdated Rhino 6 or having to draw the missing lines myself which is of course not ideal for obvious reasons.

many users were telling us that it was not working for them.

Thankyou Mary, I understood that from earlier in this thread.

Applauding your desire to serve the user base, and with all respect to the challenge of parsing the abundance of input you must receive (I can’t imagine): I’d like to as gently as possible - but assertively and confidently - suggest that your team may need a more broadly experienced set of technical drafting minds determining which input to follow than was involved with implementing that decision. No professional environment I have been in would accept the gap-laden dimensioning in the drawing I posted above, but R6 couldn’t do it any other way.

From what I see in your recent note above, a component of the issue may still be unaddressed: that of autmoating the behaviour of a dimension based on the threshold distance below which the arrows or text switch to the outside of a dimension.

If the text doesn’t fit between the hashmarks, it’s essentail for professional dimensioning that the text place itself automatically a) intially only as far beyond a hashmarks as required to clear it, and that it b) stay where a user places it if the user overrides that by dragging. Neither a) nor b) is the case with Rhino. Please see this post: Dimension Text Placement when outside Dimension Line

I haven’t been able to reproduce b). When a) gets implemented (RH-53019), please report cases where moving dimension text doesn’t stick.
-w

All of them. It will stay for a session, but usually: close and open a project and they go back to the default (too far) distance.

Hi @djhg,
Please send a file and a procedure to duplicate the issue.
Again, this is a good check list for bug submission:

Is that post for this thread, Mary?
It’s already been reported as a bug by the Rhino team
I contacted phone help moment ago about this issue though, and it’s urgent to discover how to handle it, thanks.:

Is it possible? If so, please explain. Or show me a project (just one) where it actually works as designed. I could never get it to work, so I gave up on it a year and a half ago and switched to Make2D. Make2D is of course cumbersome to use, but at least the chaos of layers provides line weight control, which View Mode and Object-Layer-Specific combinations simply did not. VirtualArq tell me they’re going toward a 3dView-based documentation system.They’re no longer developing their 2dView sys…

I would like to post that because the issue originally posted on this thread won’t be fixed until R7, I remain on SR11, putting up with a host of bugs, some of the most serious of which are these:

I find that if I activate a section to display in a particular window or detail view, rhino slows noticeably. A few section views on a layout and it’s too slow to work. Clipping planes do not have this acute effect. Is this normal?

Surfaces in blocks print differently than on their own? Rhino for Windows

I need to reiterate - in line with the discourse on that post about prioritizing fixes, that having to manually add dimensions less than 6’ is unfeasible when my projects have scores - one has hundreds - of such dimensions. Architecture or Interior design or set design is of a scale where the issue isn’t acceptable.

If this won’t be fixed, can you suggest a workaround? If I change units to inches should the issue then only be present with dimensions less than 6 inches? ( I can test it and see, but i’m not confident that the presence of yet another bug won’t obstruct the effectiveness of such experimentation.)

I’m there with you, still stuck with SR11, waiting for a miracle that I know won’t come. I would be more than happy if there was at least a global setting hidden somewhere in Advanced options that would allow me to change the behaviour to the pre-SR12 state. That wouldn’t affect any files, nor dimension styles. I don’t need control on individual dimension lines basis which is what’s implemented in V7 I assume. (And I will say it again - I consider changing something like this during a Service Update without an option to have it back a very unfortunate choice)