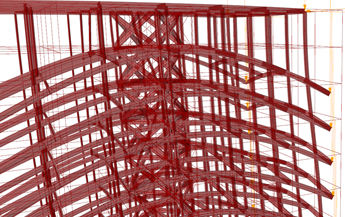 Hi there, I am rather new to karamba and have an issue with the connectivity. The columns in my structure do not connect to the beams, causing large deformations. Strange enough they do connect to the central stability element, which is connected in the same way. I tried using the joint agent, but this did not have any effect. The beams and columns are setup parametrically so they should have an exact intersection point.

Hi @dennishollanders17, are your columns split at their intersections to the beams. Make sure to explode them first if these are polylines.

I already thought this might be the problem, though I did not know how to solve this. I have imported some elements separately as beams and then another group as columns, since I want to dimension them differently. How can I split these groups again, after I joined them to this split at their intersections. Or does it work to keep the columns separated, while splitting them with a brep.

Hi @dennishollanders17, it does not matter how or where you split the columns, however you must do this before you bring this into Karamba. This will require some work in Grasshopper to do this. For example, you can find the intersection points of the columns to the beams and then shatter them, or you can get the intersection points, create a polyline from the points and explode them.

I found a way and it worked, thanks a lot !