Has there been any thoughts from the developers around making edge pairs easier to select?

If the above can’t be accomplished, at least don’t force users to click twice (yes, we know it is a pair, but the usability of taking that literally is just an RSI nightmate).

fully agree with @eobet that the way it is implemented now in Rhino is very user unfriendly. When selecting and edge, I don’t care which of the two I select first, just select one and while we’re at it, select the other that was nearest to where my mouse clicked too! In fact I just want it to work like shown in @eobet’s video.

ps: the labels for distance always show when selecting the distance radio button even when the label for distance is ticked off. The tangency and curvature work as expected.

Furthermore, it is not very clear which edge pairs are active, so when I add another edge pair, and I would select an edge pair that is already an active pair, I get no feedback whatsoever that this edge pair is already part of the active pairs.

Another observation: increasing the density of the deviation lines makes the viewport slow very quickly

Right now if you happened to have selected already all edge pairs you cannot bring up the dialog anymore after closing it.

I see that, thanks - actually any previously selected pair cannot be used to bring up the dialog.

Is it fair to bump this once per month?

@pascal mentioned that my block complaints were 20 years too late, so I don’t want to be late on this.

Edge pairs must not be two operations. It must be a single operation, and ideally box drag selection should be supported to add any number of edge pairs in one operation! You will create repetetive strain injuries otherwise, and I’m not joking on that.

(And speaking of RSI, it would actually be nice to be able to hold down the buttons on the MoveUVN tool and have them “tick” at a reasonable interval so you don’t have to click/drag around as much for the adjustments either…)

(Re: MoveUVN, please start a new thread. This one is about EdgeContinuity. It’s really difficult for us to track many different, unrelated concepts in a single thread. I see they are related by “repetitive stress” - but having that be a top-level thread topic is too broad.)

Thank you, yes that’s exactly it!

This will be partially fixed in the next WIP. You’ll be able to pick an edge pair with a window or crossing, but picking overlapping edges with a single pick will have to wait for another time (or another typist).

The box selection doesn’t seem to work very well. First edge pair I try to select across just gets ignored, the second says “cannot use” and only the third ever shows up…

I believe the “cannot use” one was due to the simultaneous selection of more than 2 edges. Also, to allow _EdgeContinuity to report the on all 3 edge pairs, the edge of the left surface needs to be split at the intersection with the other surfaces.

You can use this script to more quickly select multiple edge pairs:
rhinopython/xBatchSelectFor_EdgeContinuity.py at master · CADacombs/rhinopython · GitHub

Rhino should be able to detect connecting edges automatically.
That way we would have to just select the surfaces that we want to analyse.
Alternatively there should be an “all objects” button.

Sorry, I ment to say “additionally” instead of “alternatively”.

I have two proposals how to improve the “Edge continuity” tool:

I would find this very useful as well.

Proposal #3. Add a button called “Place marker” (or “Set marker”?) to manually place a numerical marker along the edge, with the usual ability to snap to middle, knot, point, end etc. The idea behind that marker is to always stay fixed there (unless turned off manually), no matter what’s the distance and whether there is a shorter distance between the input edges somewhere else. The user should be allowed to place as many numerical markers as he/she wants. This option will be very handy while trying to figure out where and how to adjust the surface(s), in order to make the gap in-between tighter.

Upon each pressing of the “Place marker” button, the Command line should display two new options:

3.1. By clicking on the “Remove marker” option the user could pick and remove existing marker(s) if necessary;

P.S. The inspiration for that idea came after I tried the “Edge continuity” tool on the model from the following video and it was not possible to keep the numerical marker at the desired position to further minimize the gap via the “Move UVN” tool. 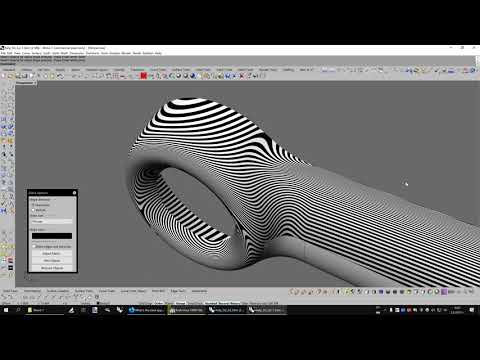 Thanks, y’all, I’ll add your suggestions to the heap.\

@Rhino_Bulgaria - as far as I can see the numeric readout is placed at the location of max deviation.