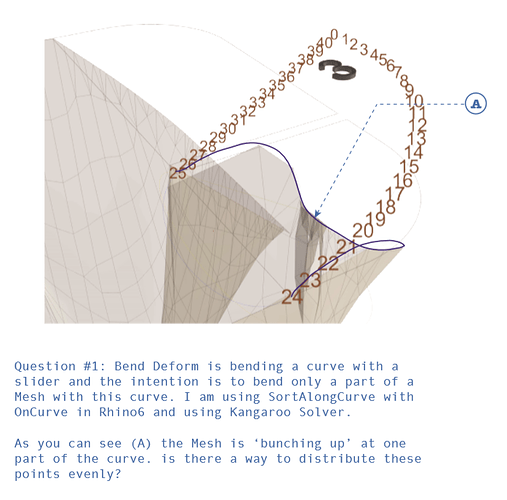 note, the mesh i am working with was originally made in Rhino as a group of 5 Meshes that were then welded and joined and the common vertices were merged and collapsed. therefore the points in the list which are being pulled to curve are incongruent.
here is the script I am using: 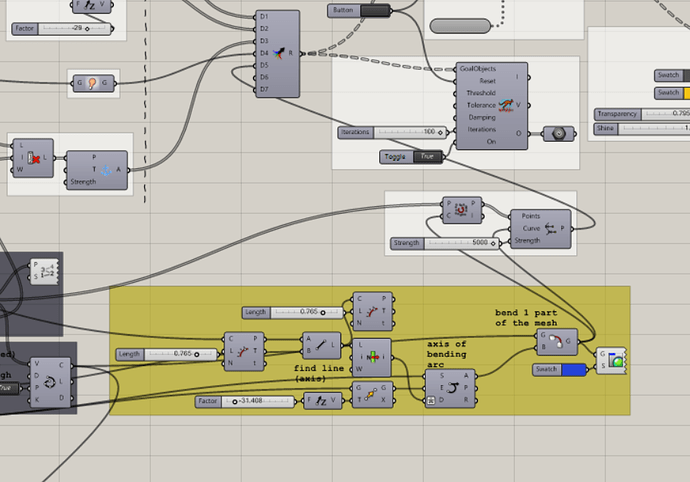 I doubt I can help but note that you didn’t internalise the rhino mesh.

the question simplified is:
using Rhino6, and Kangaroo Solver with SortAlongCurve + OnCurve - how do you pull external points of a mesh to a Curve in a equal distribution instead of having the points (Mesh) to collect or gather unevenly?

In this discussion @DanielPiker posted a definition with a C# Kangaroo custom goal to repel points on a curve or a mesh I think. It’s in the attached definition.

You might be able to use this to hold the points on your curve apart and stop them bunching up.
knotrepulsion.gh (17.9 KB)

I can’t reproduce your first picture, for me it looks like this 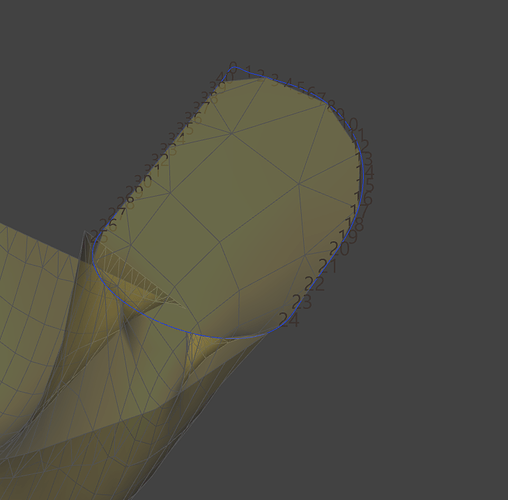 My guess - one problem is that you used a closed curve for the on curve goal by that you auotmattically produce overlapping mesh faces (also the curve looks wired since you use interpolate). Further the bend deform the way you use it seems to have zero effect atleast in my RH6.

I suspect you could subdivide the curve by the number of points you want on it and use the target input of the anchor goal for equal distance between points. At the moment the load + on curve goal result in more points on the lowest part of the curve.

Could you maybe explain what you are trying to achieve? 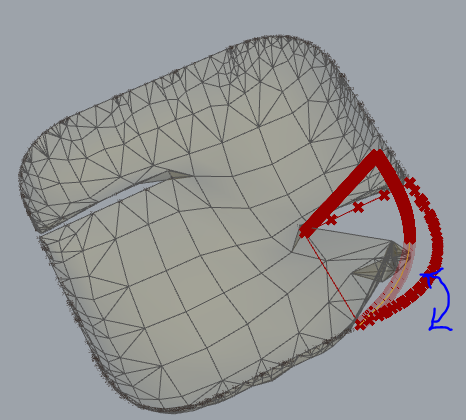 the goal is to rotate parts of the mesh object independently using sliders. i have tried to isolate the curve describing the part i wish to rotate, using that curve to pull the vertices of the mesh to the rotated position but as you see, the vertices do not stay with the rotating curve. please help if you can, this project is due later today. thank you!!!

Okay, I rebuilded this entirely. In order to do that I projected the outer polyline of the mesh to world xy, baked it, fixed one edge, referenced it back and drew the rotation axes manually. I hope I understood how the rotation should work correctly if not maybe explain it to me in german (you are also german aren‘t you?).

thank you Daniel,
i will look at your file now.
is there no way to use what was formerly (in Rhino5 and old Kangaroo - not solver or bouncy solver) ‘PulltoCurve’?
also, I am half American and half German, born in Germany, raise in the U.S. so my English is much better/ faster than my German. however feel free to reply in German as i do like to practice.
thank you again for your help with this!

is there no way to use what was formerly (in Rhino5 and old Kangaroo - not solver or bouncy solver) ‘PulltoCurve’?

I can’t answer that, this is a question for @DanielPiker, for me it was much easier to solve this with the target anchor to keep the lengths between the naked vertices fixed since every try with the on curve goal resulted in moving vertices. A possibility could be to use the on curve goal with as many segments as naked vertices, so every vertex has it’s on segment to stay on.

I’m fine with english too

That’s really cool, but raises the question… What on earth is it?

thank you again for helping me with this. i rewrote your solution and separated the rotation sliders for each of the 4 curves because that is what i need in order to further develop the figure using Firefly.

this project is part of a doctoral research and i would like to credit you Daniel if you like, if so lets think of a way to exchange information.

i am attaching my reworked grasshopper file here. i learned a lot from your solution in terms of new grasshopper commands. in the attached are a few questions if you had time to clarify but if not no worries.

glad I could help. I developed my approach further and added the bend deform after the rotation. (the gif didn’t turn out that nice :/)

i am attaching my reworked grasshopper file here. i learned a lot from your solution in terms of new grasshopper commands. in the attached are a few questions if you had time to clarify but if not no worries.

ok cool, will look at your second solution w/ bending thanks!

i rewrote your solution and separated the rotation sliders for each of the 4 curves because that is what i need in order to further develop the figure using Firefly.

The thing I noticed first in your modified file - if you need to control each slider individually you don’t need to split the tree structure. Attached a version with it’s own slider for each axis.

Oh I noticed you slightly changed the polyline and axes, here v4 with them in it.